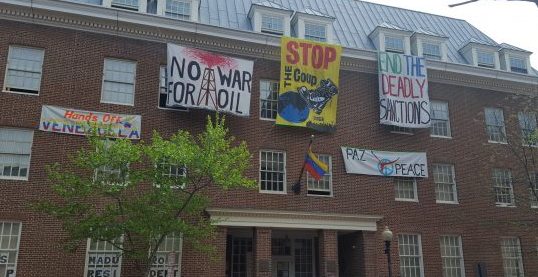 Last night (May 3),  it became evident to the Embassy Protection Collective that the Secret Service and State Department Police have been directed to allow the opposition to drive us out of the Venezuelan Embassy. They are giving the right-wing pro-Guaido mob freedom to frighten us and prevent food from coming into the embassy in order to force us to leave. The police have also allowed them to assault our allies outside of the embassy. In fact, victims of assault have been arrested while those conducting assaults have not been arrested.

Working with our allies outside the embassy, we have called for a mobilization today and for the remainder of this action to combat the right-wing extremists. Their violence should be a reason for all who oppose imperialism and US domination to join us. Read about the Embassy Protection Collective, our Declaration and what you can do.

Yesterday, we defeated the food blockade and got multiple bags of food into the embassy with a rope pulling them up from the ground floor into the second floor.

Getting bags of food into the embassy undermined their strategy and further frustrated them, leading to more aggressive actions last night. As a result, our attorney sent the letter below to the State Department. Numerous calls were made by activist to the Secret Service complaining about their failure to protect the embassy and the people inside, as well as to the DC Metropolitan Police.

The US wants us to leave voluntarily because of the unpredictable consequences of violating international law by unlawfully entering the embassy and removing us. The US does not want to set a precedent that includes putting US embassies around the world at risk .

The US has helped to put in place hated governments in many countries and is allied with monarchies and dictators. The people of those countries can revolt at anytime and the US embassy could be attacked. The host country could follow US precedent if the US violates the Vienna Convention by failing to protect the Venezuela embassy in Washington, DC.

After the terror attack tonight,  members of the Election Protection Collective gathered and each person renewed their commitment to protecting this embassy. This morning we decided to begin to form the Embassy Protection Collective choir. Our first song “We’re Still Here,” with the assistance of Holly Neer.

The abuse campaign being followed by the Trump administration has strengthened our resolve. Their extreme and lawless tactics highlight how important the stand we have taken has become. We will not turn over this embassy to the coup forces voluntarily. We will hold it and protect it as best we can until a permanent protectorate is established by the elected government of Venezuela. We thank those outside who are acting in solidarity with the Embassy Protection Collective. We see what you are being forced to endure and your great strength in responding to it with love and peace. Learn what you can do to be part of the effort.

Below is the letter sent by Mara Verheyden-Hilliard of the Partnership for Civil Justice Fund to the State Department:

At this moment, the violent mob that you have allowed to continually commit acts of violence against persons and property at the Venezuelan embassy is actively working to smash in the doors while your officers give permission to the assault and explicitly refuse to intervene.

There has been no action that has divested them of the right to be inside the embassy or lawful process that could authorize removal.

Instead you are authorizing a vigilante group to attack the peace activists inside.

You must take action immediately to cease this assault, and ensure that there is no violence against the persons inside. They are in grave danger from the mob you have facilitated and authorized to besiege the embassy.

You are responsible for any acts of violence that will be committed against these peace activists inside the embassy.

Mara Verheyden-Hilliard, Esq.
on behalf of the Embassy Protection Collective