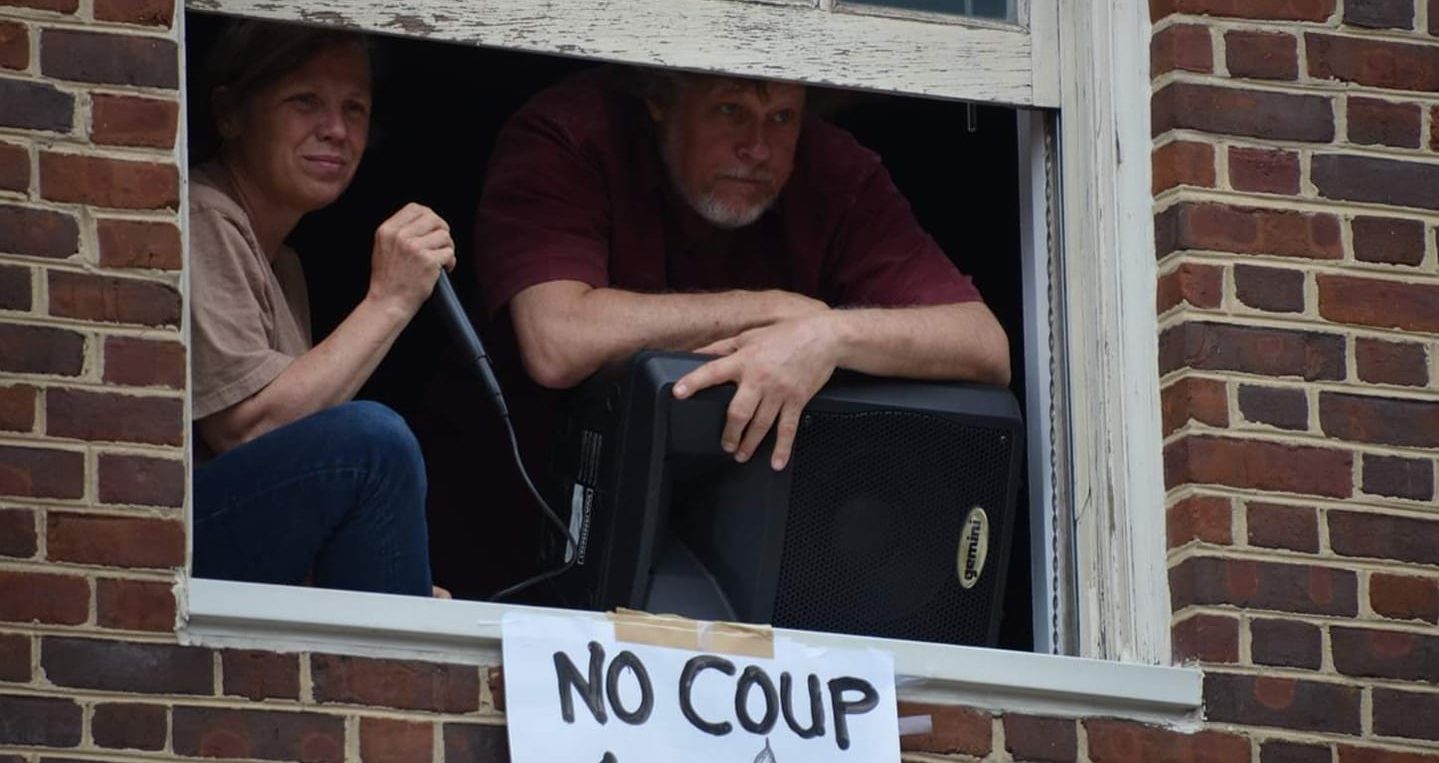 The Embassy Protection Collective formed on April 10, the day after the Trump administration manipulated the Organization of American States (OAS) to change the rules so they could recognize their puppet, Juan Guaido, as president of Venezuela. The OAS could not get the required two-thirds vote to recognize a government so they changed the rules to a mere majority and barely got that. By then, the US had allowed their Guaido coup forces to take the Venezuelan military attaché building in Washington, DC and three diplomatic offices in New York City.

The Trump administration is allowing extreme violent right-wing Guaido supporters to blockade the embassy. Despite a standoff in the last week, we had a series of victories over those forces and remain steadfast protectors of the embassy.

Surround the embassy with love and resistance.

We adopted a theme song for the Embassy Protection Collective, “We’re Still Here” by Holly Near. The chorus begins with:

We woke up on April 30 to the news that Juan Guaido was going to attempt a coup again, which made us wonder why he needs to conduct a coup if he is the “president.” We were alerted by our Venezuelan allies that this second coup attempt would be easily defeated, which it was, but to expect coup-supporters in the US to protest at the embassy.

In fact, the extremist Venezuelan coup supporters showed up that morning and tried to take over the steps in front of the building. A team of embassy protectors took a stand on the steps and stopped them from taking over the entry. More violent extremists showed up throughout the day, causing police to erect a barricade between us in front of the embassy. We sang almost non-stop to keep ourselves from engaging with them while they blew sirens and other loud noises and insulted and threatened us shouting racist and misogynist comments and using lewd gestures. Police refused to pass food and water to us or to allow our allies into the space in front of the embassy. We held that space through the night by taking shifts.

In the courtyard behind the embassy, the pro-coup forces harassed, intimidated, threatened and assaulted our allies outside who bravely prevented them from entering the building while folks inside set up reinforcements to stop them from coming in the door. This lasted until 1:00 in the morning.

We were ready for him to enter and be forced to remove us. As he came to the front porch to speak, we stood resolute behind him holding signs and chanting, ‘No Coup.’ When he began to speak, we cut off the power to his sound system and out-shouted him. Vecchio was forced to flee, chased by reporter Anya Parampil who asked him, “Where are you going next, the White House?”  A representative vaguely told the crowd they were “working on a process to evict us.” The coup failed in Venezuela on April 30, and failed again in Washington, DC on May 1.

Watch @carlosvecchio’s staff fail to answer what they plan to do from within the Maduro government’s embassy, considering they won’t even be able to issue visas.

Also can’t answer why their colleagues attended a DC think tank meeting to plan for the invasion of Venezuela. pic.twitter.com/xHXWc7bRua

The coup supporters started setting up tents around the embassy that night and blocking our people from entering the building as police stood by and did nothing. When members of CODE PINK brought food the next day, surrounded by clergy, they were stopped from delivering it. Two allies, Ariel Gold of CODE PINK and Chris Herz tossed bread and other foods onto a patio to us. They were arrested and charged with “hurling missiles” at a building.

We pushed back at police for not allowing the food in, and they provided a blockade for our members to come down and get the groceries. Coup supporters stole hundreds of dollars worth of the food. We were also able to get some medications in that day for people who required it. Since then, we have struggled to get supplies. When we lowered a rope from a window and successfully brought up four bags of food, the coup supporters rushed a barricade and assaulted our allies. It was our people who were threatened with arrest even though they were the ones who were knocked to the ground.

An older gentleman from the neighborhood wanted to bring us toothbrushes and toothpaste. He was swarmed by the violent extremists. When he tried to pass between two people to get to the door, he was thrown to the ground violently and seriously injured. He was arrested, not the ones who threw him down. It has become common for police to arrest the victims of assault, not the people who committed the assault.

These seem to be US-trained regime change operatives who use violence, psy-ops and and intimidation against us. Some are Nicaraguans and Cubans, not Venezuelans. They have unlimited resources. They are constantly bringing in more supplies. From early in the morning, we are surrounded by them and subjected to their sirens, banging of pots and pans, loud music, taunts and threats of physical harm.

They have tried to break in numerous times. They drilled through a door to the garage and damaged the lift gate with a sledgehammer. On Friday night, they banged on the doors so hard for hours that they were damaging them. We had to fortify the old wooden doors so they would not break through. The Secret Service watched while they did it and not only let them but refused to say they would protect our safety. When we called them, they said we should ask the Venezuelan government for help. It took hundreds of calls from supporters to get them to stop.

The Secret Service is allowing them to do all they can to intimidate us very likely under orders from the White House. They want the extremists to frighten us so we leave the embassy. Their actions have had the opposite effect. They have united us in our determination to protect the embassy.

Despite being barricaded in the building and cut off from access to supplies, we are victorious. We are still here and there is little chance of eviction because we are violating no laws. We have built a powerful and united community that works together to protect the embassy and to keep the violent extremists and Trump administration out. 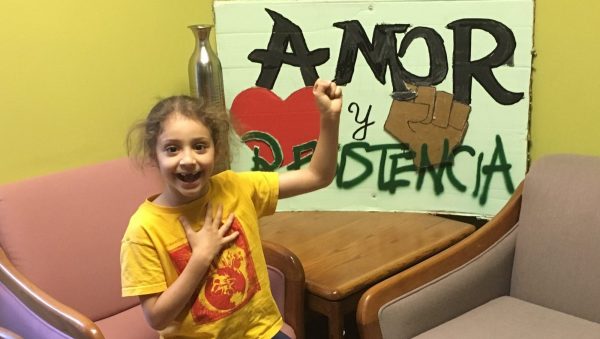 Surrounding the Embassy with Love and Resistance

The Trump administration realizes that entering the Venezuelan Embassy in violation of the Vienna Convention would set a precedent that could put US embassies around the world at risk. As a result, they are allowing right-wing extremists to harass and threaten us and try to starve us out. That is their only hope of taking over the embassy.

We refuse to give in no matter what they do. Our lawyers are making sure there is a record of the incidents, which we have in large part due to our embedded media, Anya Parampil of The Grayzone Project and Alex Rubinstein of Mintpress News. We also have to give a shout out to TeleSur, who was embedded with us until the pro-coup forces arrived and now is providing coverage from the outside. Allies outside are identifying the pro-coup actors. We wrote to the State Department and Secret Service about the violence and have told them we will hold decision-makers and police officers responsible for their actions.  But mostly, we have responded to these intimidation tactics in solidarity and have strengthened our resolve to protect the embassy.

A highlight of the week for us, after many difficult days, was to see hundreds of Embassy Protectors show up outside yesterday. They chanted with us and sang. We ended the night with revolutionary music blasting from the second floor embassy windows and dancing together even though they were on the sidewalk across the street and we were inside the embassy. The extremists’ banging of pots, strobe lights and blasting sirens at us only added to the festive atmosphere.

Today, more Embassy Protectors returned to show solidarity and express their love. We also started receiving many messages of solidarity and appreciation from individuals and social movements in Venezuela. This means the world to us. We are surrounded by violent, right-wing, regime change forces who are trying to wear us down. These are the same actors who held violent protests in Nicaragua and Venezuela. They are making death threats, threatening women with rape and mocking us, all in a posh Georgetown neighborhood. It is surreal.

We recall the mass mobilizations in Charlottesville, Boston and New York when right-wing, racist, misogynist hate-filled people came there and urge that mass resistance to join us now. This is a critical struggle. If the embassy is overtaken, it will set us on a path to war in Venezuela, and chaos and devastation to the region. If we can continue to protect the embassy, Venezuela and the United States will have time to negotiate with third countries to serve as protectorates for their embassies and this could begin a path to peace. Perhaps Trump will even see that the Bolton-Abrams-Pompeo team has misled him and reverse the disastrous policy course he is on. There is no reason to steal Venezuela’s resources, the US should respect Venezuelan sovereignty and negotiate agreements as has been done previously.

We are asking people to come to DC to surround this embassy with love and resistance. Let’s show that love will prevail.

If you absolutely can’t come to DC, please contact your member of Congress to make them aware of the situation. Tell them:

Review The Declaration of the Embassy Protection Collective and sign-on to show support.

And finally, please make a donation as we have incurred many unexpected costs for this mobilization.