Embassy Protectors Are Being Denied Their Right To A Fair Trial

By Ajamu Baraka and Bahman Azad, Embassy Protectors Defense Committee.
December 15, 2019
| Newsletter
Embassy Protectors Are Being Denied Their Right To A Fair Trial2019-12-152020-01-15https://popularresistance-uploads.s3.amazonaws.com/uploads/2017/12/popres-shorter.pngPopularResistance.Orghttps://popularresistance-uploads.s3.amazonaws.com/uploads/2019/08/embassy-protectors-outside-of-court-with-supproters-1.jpg200px200px

Above: Embassy Protectors outside of court with supporters.

On Friday, December 13, Judge Beryl A. Howell, the chief judge of the US District Court, denied the discovery motions requested by the four embassy protectors who were arrested on May 16 after staying in the Venezuelan Embassy in Washington, DC for 37 days to prevent it from being handed over to coup-leaders in violation of the Vienna Convention. This denial will severely restrict the scope of the trial, currently scheduled for February 11, 2020, of Adrienne Pine, David Paul, Margaret Flowers, and Kevin Zeese. They face federal charges punishable by up to a year in prison, a $100,000 fine each and restitution to the government for police time and damages.

Judge Howell’s ruling will result in a farcical trial where the jury will not be allowed to consider the contentious legality of the Trump administration’s recognition of the leadership of the coup in Venezuela, and thus the legal basis of the charges the defenders are facing. Judge Howell’s lack of objectivity and understanding of the issue were revealed when she referred to the embassy protectors as a “gang” and stated the facts supported their guilt. She made it clear a trial will result in their conviction and promptly made rulings that will ensure that outcome. 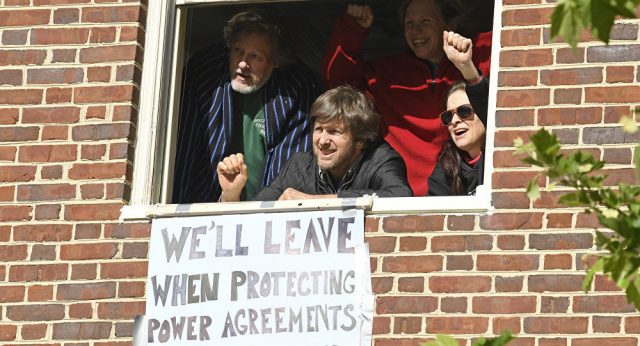 Final four at the window with a sign that says ‘We’ll leave when protecting power agreements are completed.’

What were the Embassy Protectors seeking?

The embassy protectors had permission from the elected Venezuelan government to be in the embassy. The Trump administration is arguing that Juan Guaido’s fake ambassador, former oil executive Carlos Vecchio, who fled Venezuela because he is wanted for violent coup activities, had the authority to order the embassy protectors to leave. This is the crux of the case, but jurors will not be permitted to know this.

The documents that the Embassy Protectors sought would demonstrate the de-facto recognition by the Trump administration of President Maduro, the democratically-elected president of Venezuela, recognized by the United Nations and most of the world. The Trump Administration was in negotiations with the Maduro government for a mutual protecting power agreement for the US Embassy in Caracas and the Venezuelan Embassy in Washington, DC. This is a standard procedure used when diplomatic relations between countries are broken.

On May 15, one day before the arrest, the Venezuelan ambassador to the United Nations Samuel Moncado held a press conference at the UN where he explained they were in discussion for Switzerland to be the protector of the US Embassy in Venezuela and Turkey to be the protector of the Venezuelan Embassy in the United States. The embassy protectors told the police on May 13 they would leave the embassy when these negotiations were complete. The protecting power agreement was not being negotiated with Juan Guaido, the self-proclaimed ‘president,’ because Guaido lacks the power to enact such an agreement.

Elliot Abrams, Trump’s Special Representative for Venezuela, said on January 25, 2019, that Guaido’s term would not begin until President Nicolas Maduro left office. On August 2, Abrams was interviewed by the American Enterprise Institute where he expressed frustration that Maduro was still in office. The jury will not know that the person in charge of Venezuelan policy for the US was publicly acknowledging Maduro is still the president because Judge Howell declared this is not relevant to the case.

In fact, the pro-coup mob who destroyed doors and windows defaced the embassy and broke into the building worked with the Secret Service and State Department to terrorize embassy protectors, block food deliveries and assault people outside the embassy. The judge is not going to permit the jury to hear this testimony.

The actions of Judge Howell are turning Trump’s prosecution of the embassy protectors into a charade where they and their lawyers will not be allowed to mount a defense. This is another example of how the legal system is designed to deny justice. 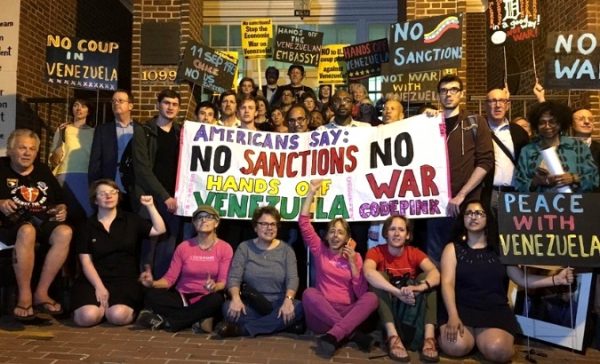 Our responsibility as citizens of US Empire

Beyond the legal and political implications of this case, there is the human element. The embassy protectors face the real possibility of imprisonment and steep fines for the crime of living up to their responsibilities as citizens of US empire. The protectors, who included more than 70 people during those 37 days, slept in the embassy, not to seek publicity as they knew the corporate press wouldn’t cover them, or because they enjoyed not eating when the right-wing thugs with the help of Trump administration would not let food and water inside, or because they wanted to live in the dark after the government shut off the power, but they put their bodies on the line and gave their time in solidarity with the people of Venezuela.

The suffering they endured to protect the embassy was a microcosm of the suffering of the Venezuelan people who lack food, medicine, and electrical power because of illegal unilateral coercive measures from the US economic war, which is seeking to force Venezuela to put in place a US puppet-government.

The embassy protectors represented all of us who are citizens of the US empire but could not make our way to Washington D.C. to carry out our responsibility to resist US lawlessness. We need to join together to demand the charges against the embassy protectors be dismissed.

Take action here to demand that all charges are dropped. Give what you can to the embassy protectors’ defense for their legal fees. Donate here. Show your solidarity with us for justice, human rights and international law as well as for common human decency. Like the protectors, join the struggle for a new world because there is an alternative!

Ajamu Baraka and Bahman Azad are the co-chairs of the Embassy Protectors Defense Committee. Baraka is the national organizer for the Black Alliance for Peace and the Secretariat of the U.S. Peace Council. Azad is coordinator for the Coalition Against U.S. Foreign Military Base and the Executive Secretary of the  U.S. Peace Council.