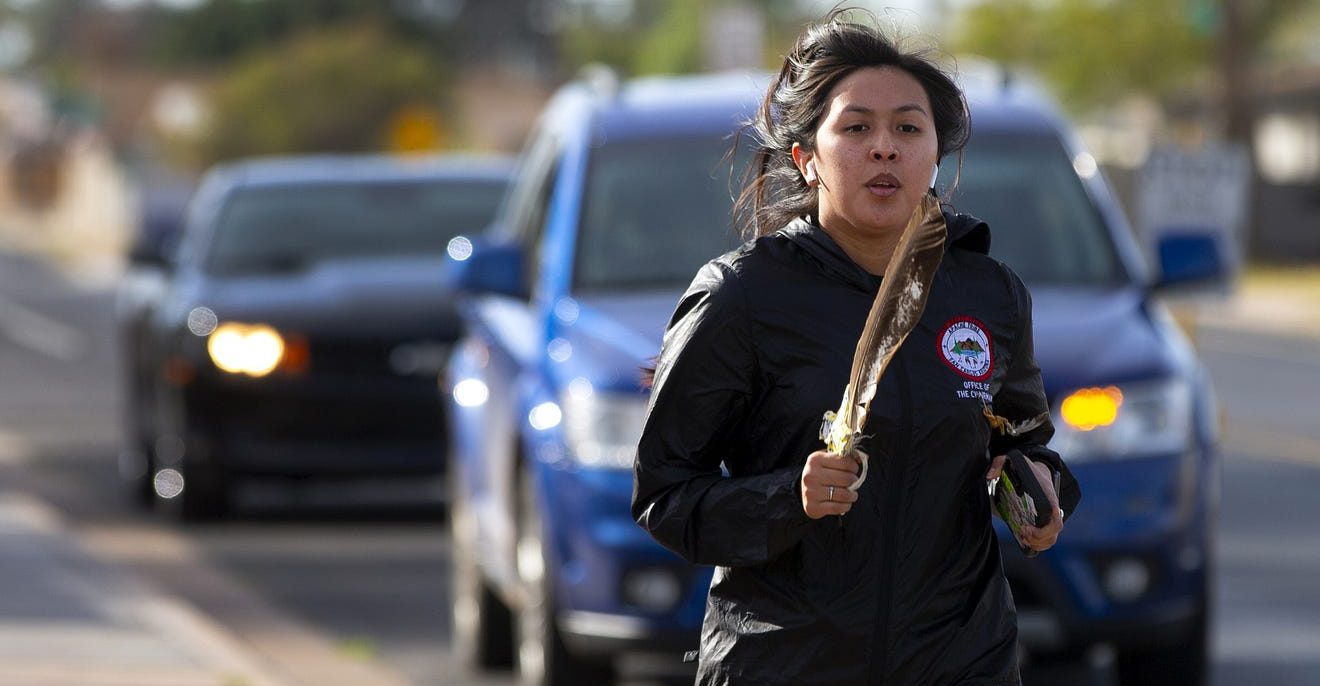 Above photo: Apache Stronghold member Naelyn Pike participates in a relay from Oak Flat to the Sandra Day O’Connor U.S. Courthouse in Phoenix. The group opposes a copper mine that would obliterate the sacred site. Cheryl Evans/The Republic.

Phoenix, AZ – In a riveting and emotional hearing in front of U.S. District Court Judge Steven Logan at the Federal Court in Phoenix, the Department of Justice attorney claimed that the destruction of Oak Flat, or Chi’chil Bildagoteel, was “not a substantial burden” even though it would prevent the Apache from practicing their religion.

After running the 70 miles from Oak Flat to the Courthouse, Dr. Wendsler Nosie and Naelyn Pike testified regarding the importance of Chi’chil Bildagoteel to the Apache.

Ms. Pike related the importance and the experience of the Coming of Age ceremony to the Apache.

Dr. Nosie told of the historic Apache use and power of Chi’chil Bildagoteel.  He also described his direct relationship to Mangas Colorado, a signer of the Treaty of 1852.

The treaty of 1852 promised that “the government of the United States shall” maintain Apache access to their historic lands “conducive to the prosperity and happiness of” the Apache, including Oak Flat.

Anthropologist Dr. John Welch testified that the Treaty which reserves Oak Flat for the Apache has never been amended and that Apache ownership of the area has never been surrendered.

“We will continue to pray for a positive outcome,” said Dr. Nosie.  “The fate of Chi’chil Bildagoteel and our ability to practice our religion is at stake.”

Dr. Nosie has been living for more than a year at Chi’chil Bildagoteel.

Judge Logan promised to issue a rule on February 12, 2021 whether Oak Flat will be given away to Rio Tinto/Resolution Copper without a trial.

Opponents of a copper mine project that would obliterate an Apache sacred site east of Phoenix asked a federal judge Wednesday to stop work on the project.

The group Apache Stronghold filed the first in a series of three lawsuits Jan. 12 to stop Resolution Copper from proceeding with a huge copper mine below Oak Flat, a site deemed sacred to many Apaches and other Southwestern tribes.

The suit was filed three days before the Forest Service issued the final environmental impact statement regarding the mine project on Jan. 15, starting a 60-day clock on a land swap that would turn the land over to Resolution.

In emotional testimony at the hearing, Naelyn Pike, a young San Carlos Apache woman, spoke about what Oak Flat meant to her existence and continued spiritual practice.

“Oak Flat has been sacred for time immemorial,” said 20-year-old Pike. “That land is a spirit; Usen (the Apache Creator) gave life to all.”

Pike, the granddaughter of Wendsler Nosie, head of the group Apache Stronghold and the plaintiff in the case, said Oak Flat is a direct connection to the Apache religion.

“Prayers go to Creator there,” she said, her voice audibly choking with emotion, “and that can’t happen anywhere else.”

The hearing followed a two-day traditional run of about 75 miles from Oak Flat to Phoenix, a 3-mile walk to the Sandra Day O’Connor Federal Courthouse and a prayer vigil.

Activists hoped to draw attention to the project and the late-night deal that authorized it in 2014. Opponents say the mine poses a grave danger to Apache religious rights and groundwater supplies for much of central Arizona. They also fear a catastrophe if nearby Apache Leap were to collapse because of the block cave excavation method the mining operation will use.

A ruling is expected later this month.

How the copper mine deal happened

The deal to swap 2,200 acres of Tonto National Forest land for 5,376 acres of private land was made with a midnight rider attached to a must-pass national defense spending bill in December 2014.

The rider was offered by the late Sen. John McCain, a Republican, and supported by Democratic Rep. Ann Kirkpatrick, who represented Congressional District 1 at the time, along with an array of Republican congress members. The land had been withdrawn from mining in 1955 when Oak Flat was made part of Tonto National Forest.

The deal represents a “long history of a capitulation of the Democratic Party to (the copper mine’s) development in order to protect its seat in Arizona,” said Andy Stahl, a retired Forest Service official who now heads the Forest Service Employees for Environmental Ethics, a nonprofit organization that supports governmental whistleblowers.

“There was only one date that was in 2021,” he said, though he believes that was an error corrected the next quarter.

Apache and other Southwestern tribal peoples have long opposed the project, along with environmentalists and retired miners who fear for the region’s water supply, a group of religious leaders who agree with Nosie on the damage to Apache religion and many residents.

The mine would use the block cave method to extract copper ore that lies more than 7,000 feet below ground level. This method involves excavating underneath the ore body, eventually making the ground above collapse into the tunnel. Another tunnel would be drilled to transport the ore to a processing facility to extract the copper.

The process would create a giant sinkhole up to 800 feet deep and nearly 2 miles wide, wiping out Oak Flat, a riparian zone and some surrounding lands.

Mine opponents run, pray to make their point

On Monday evening, along a pitch-black stretch of U.S. Highway 60 just west of Florence Junction, Nosie and members of Apache Stronghold were in the middle of a relay run from Oak Flat to Phoenix, part of an effort to demonstrate opposition to the mine.

As vehicles whizzed by, Nosie said he was praying, as he’s done throughout the years, and received what he said was a call to bring sacred items from Oak Flat — in this case, an eagle feather-topped staff and a black stone — to witness the court proceedings.

“I’m not a young man anymore,” said Nosie, 61, but he still managed to run his part of the relay alongside younger members of his family and the Stronghold group.

The group stopped in Mesa for the evening and resumed the run Tuesday morning, reaching the federal courthouse in downtown Phoenix at about 2 p.m. After stopping to pray, the Nosies rested for the following day’s court appearance.

A group of about 50 supporters and Apache Stronghold members gathered in front of the Arizona Chamber of Commerce’s building on North Central Avenue on Tuesday evening for a 3-mile march to the federal courthouse. There, they held a prayer vigil.

The group swelled to more than 100 by the time they reached the courthouse at about 6:30 p.m. Some early arrivers were chased off the plaza fronting the main entrance by security. A plainclothes law enforcement official quietly watched the group in an unmarked SUV parked at Fourth Avenue overlooking Washington Street, but the group continued to gather.

Tracey Sekayumptewa of Chandler came to the prayer vigil sporting earrings with the message “land back,” which reflects the current movement to return at least some lands to tribes.

“I’m here to show support in solidarity with the Oak Flat fight,” said Sekayumptewa, who is Hopi, Navajo, Sac and Fox, and Shawnee. “We’re here to remind people we need to protect our sacred spaces.”

She said she hopes President Joe Biden takes Oak Flat into account after stopping the Keystone XL pipeline, which many tribes opposed.

Knight was part of the Native veteran contingent called to assist with the Standing Rock occupation opposing the Dakota Access Pipeline in December 2016. She said she’s a humanitarian and environmentalist who came to support fellow Native people, concerned with not only water use but the damage mines leave behind, such as the mess left behind when Peabody Mining pulled out of her community.

Cooper Curley, another Navajo, has occupied Oak Flat alongside Nosie since 2015. He was there to pray for people to realize the toll to local residents’ health living with the huge mines that dominate the “Copper Triangle.” People in Globe, Miami and Superior suffer from health issues in great numbers, he said. Curley said it’s important to protect the holy ground of Oak Flat.

Curley also said the environmental impact study process showed how people can play the system to benefit themselves. Curley pointed to the tribal consultation process as deeply flawed.

“They have one meeting, show up at one event or send one ‘Dear Tribal Leader’ letter to show they consulted with tribes,” he said.

Apache Stronghold’s attorneys argued that the Western Apache peoples’ First Amendment right to practice their religion would suffer a devastating blow as Oak Flat, known to Apache people as Chi’chil Biłdagoteel, sinks more than 800 feet to form a nearly 2-mile-wide crater, the result of Resolution’s mining process to extract copper.

Justice Department attorneys countered that the government’s right to manage its own land is not trumped by tribes’ rights to their religious practices, referring to a 1988 case in which Northern California tribes unsuccessfully argued that a Forest Service road through a sacred site would unduly burden their religious practice rights.

John Welch, an archaeologist who has extensive experience working with Apache peoples and has written papers on the subject, said the Treaty of Santa Fe, ratified by the U.S. Senate in 1852, governed relations between the federal government and all Western Apache peoples. That includes, as he defined them, all Apaches who lived west of the Rio Grande.

Welch acknowledged to Judge Steven Logan, who’s hearing the case, that the lands referenced in the treaty were not clearly defined, and that a provision of the treaty said that the U.S would designate territorial boundaries. But Welch also said Oak Flat was clearly part of the Apache lands that the treaty recognized as belonging to the Apache peoples.

Keeping Oak Flat intact is essential to Apache peoples’ religious practice, Welch said. Apache religion is centered on the integrity of the natural world, he said. Religious practice with very few exceptions does not allow for any intrusion on the land. “It’s so dangerous it’s hard to describe.”

These arguments were eclipsed by the emotional testimony of Pike, who said that an acorn picked from any place other than one of the Emory oaks that give Oak Flat its Apache name, Chi’chil Biłdagoteel, or “Emory oak extends on a level,” lacks that direct connection to the Creator.

“If you don’t have that connection,” she said. “everything is taken away from us.”

What’s next for the lawsuit and Oak Flat

“Under that approach, it cannot be implied or presumed that a tribe has lost governmental powers or property rights, unless there is clear treaty or statutory language to support the divestiture of preexisting tribal rights,” said Leeds, who is not a part of the Oak Flat case.

Leeds, a citizen of the Cherokee Nation, referred to the recent McGirt case in the Supreme Court, which reaffirmed that the Muscogee (Creek) Nation’s reservation lands had never been clearly disestablished by Congress, as an example of this concept.

Leeds also said that while some treaties set property descriptions, which she described as similar to real estate deeds that clearly mark where sovereign tribal territories begin and end, the Santa Fe Treaty did not.