Above Photo: A pipeline rupture in 2010 sent more than 1 million gallons of tar sands oil spilling into the Kalamazoo River near the town of Marshall, Michigan. It took two years to clean up. Credit: State of Michigan

The Kalamazoo disaster was one of the biggest inland oil spills on record, and it raised questions about the safety of Enbridge’s tar sands oil pipeline system.

The Canadian oil pipeline company responsible for one of the largest inland oil spills on record has agreed to pay a $1.8 million fine for failing to thoroughly inspect its pipelines for weaknesses as required under a 2016 agreement.

Federal officials say Enbridge, Inc., did not carry out timely and thorough inspections on one of its pipeline systems, as it had agreed to do as part of a consent decree reached with the U.S. Environmental Protection Agency and U.S. Department of Justice.

The 2016 settlement stemmed from a massive 2010 oil spill into Michigan’s Kalamazoo River. The spill required years and more than a billion dollars to clean up, and it highlighted the hazards of pumping heavy tar sands oil through pipelines.

More than 1 million gallons of tar sands oil spilled into the Kalamazoo River near the town of Marshall when a 6-foot rupture opened in Enbridge pipeline 6B. Despite warnings of trouble, oil flowed for 17 hours before Enbridge shut down the pipeline. Ultimately, the oil pushed nearly 40 miles downriver, fouling 4,435 acres of land near the river’s banks. It triggered a massive cleanup effort that cost the company $1.2 billion and kept the river closed for nearly two years.

As part of a sweeping, $177 million settlement, Enbridge promised to look for cracks and corrosion on its Lakehead pipeline system, a nearly 2,000-mile grid of pipelines that brings oil from Canada into the United States.

In a document filed in a Michigan federal court on Tuesday, the government alleges that Enbridge failed to properly conduct six inspections.

Although the company agreed to pay the fine, it nevertheless denied that it violated the terms of the consent decree and said it had properly inspected the pipelines.

Inspecting Oil Pipelines from the Inside

The 2016 settlement, which included a $61 million fine, ended nearly two years of negotiations and levied one of the largest penalties ever for an inland oil spill. The settlement also resolved Clean Water Act violations and payment of cleanup costs and required Enbridge to spend at least $110 million on spill prevention safeguards and other improvements along a pipeline system crisscrossing the Great Lakes region.

One of those precautionary measures called for inspecting the pipelines using a tool that is run through the pipelines to detect flaws from the inside. Federal authorities say Enbridge did not meet several of its deadlines to conduct those inspections.

The government also questioned the reliability of the inspection tool Enbridge used to find and gauge the size of any cracks in the pipeline.

As part of the most recent settlement, Enbridge has agreed to work with a vendor to develop a new inspection tool that will be better able to detect and accurately size cracks. Enbridge pledged to complete pipeline inspections “as expeditiously as practicable” once that tool has been developed.

Just the Latest Challenge for Enbridge

The new settlement comes at a time when Enbridge is facing questions over the integrity of its Line 5, which runs under the Straits of Mackinac that connects Lake Michigan and Lake Huron in northern Michigan. 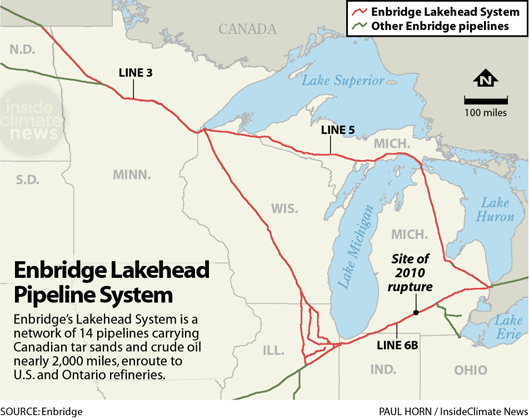 A section of Line 5 was recently damaged by a suspected anchor strike, and Enbridge had to reduce the operating pressure. Earlier concerns, including about the protective coating on the same stretch of Line 5, a twin set of pipelines that carries oil and natural gas, drew the attention of environmental activists and federal pipeline inspectors.

Enbridge’s proposed Line 3 expansion in Minnesota is also drawing opposition, including from Native American tribes. A judge last week recommended the company expand within the current Line 3 route, which cuts through two Indian reservations. The company wants instead to build a new route that skirts the reservations while passing through wetlands and an important watershed.