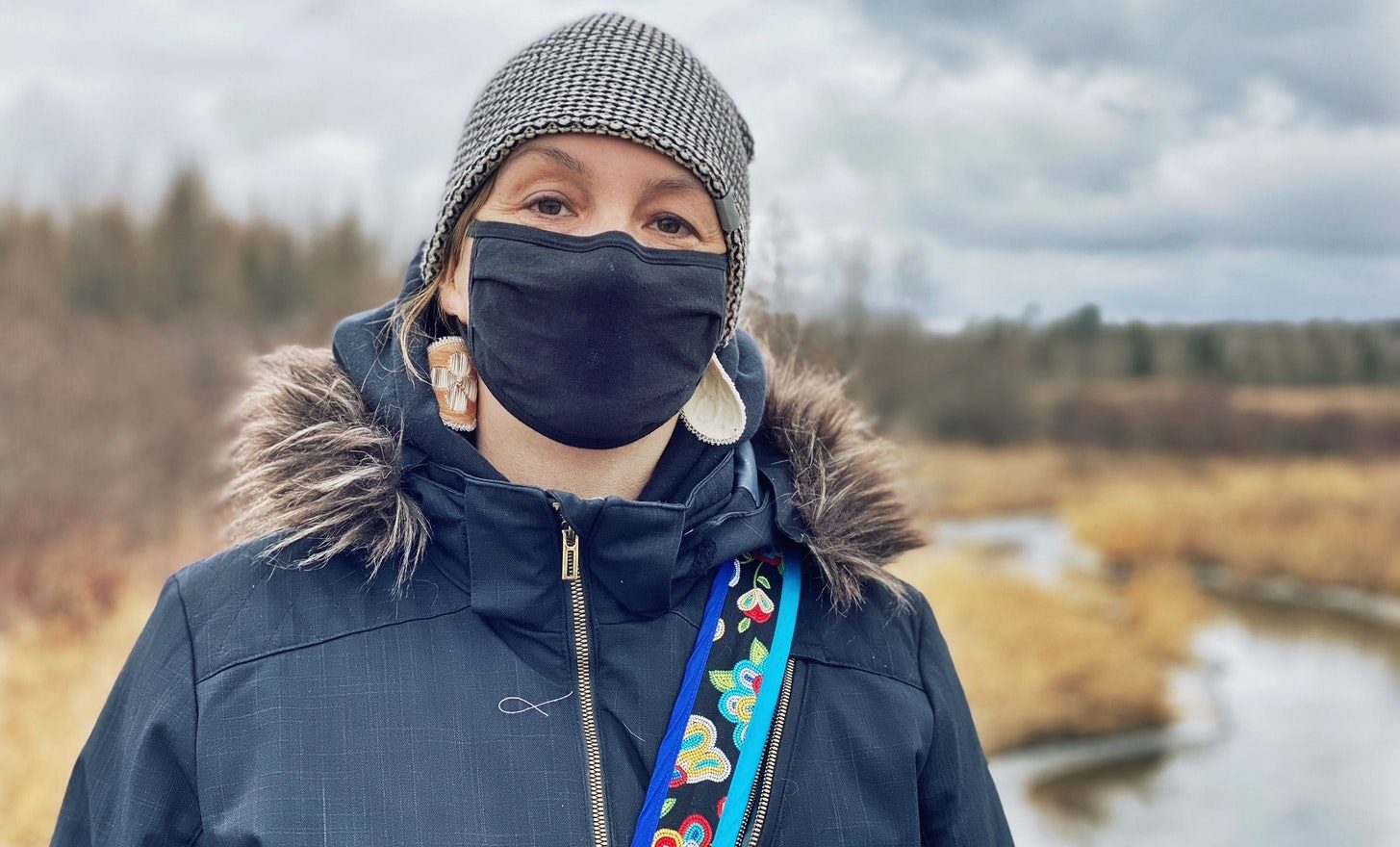 Above photo: Simone Senogles, from the Red Lake Nation of Ojibwe in northern Minnesota, speaks of the fear instilled in her community ever since Canadian oil company Enbridge started funding a statewide police task force to crack down on pipeline opponents.

The actress and climate activist told HEATED on Tuesday that her much-publicized press conference to oppose the Line 3 tar sands pipeline was delayed because of an extended interaction with the Minnesota State Patrol. On her way to the event, the vehicle leading her caravan was pulled over for failure to signal more than 100 feet before a turn.

“We pulled over to wait for them, it took a long time to process their identification, and they ended up not being ticketed,” she said. “Then we drove 12 miles to the press conference and the police car followed us the whole way.” While being followed, they couldn’t tell what the speed limit was (unmarked roads, this is Northern Minnesota). So Fonda’s caravan drove at a glacial place to avoid getting stopped again, further delaying the press conference.

Fonda’s experience on its own was benign. Her colleagues were not arrested, hurt, or ticketed. If you watch the video of the stop, the police officer actually seemed super nice. Really, it’s the woman driving who seems kind of mean.

But Fonda does not see her experience in isolation. She views it as part of a coordinated effort between Minnesota law enforcement and the Canadian oil company Enbridge to harass, intimidate, and surveil opponents of the Line 3 pipeline. “This is a public police force that’s been privatized by a foreign oil company, and every minute they spend harassing the water protectors—and assaulting the water protectors—they turn in an invoice and they get paid,” she said. “They’re making a fortune off this.”

“This was just a little taste of what these the local water protectors are getting every day,” she added. “I was sort of glad that I experienced it.”

“The police presence has been strong,” said Tara Houska, a tribal attorney and founder of Giniw Collective, a frontline group resisting the pipeline through direct action. “We’ve seen groups of squad cars 20-plus strong from different counties guarding the line. Last week a car followed us for two hours straight.”

Aitkin County, MN decided to charge me for a #StopLine3 demonstration back in January, my 1st hearing was this morning.

There are 130+ Water Protectors facing charges for protecting the land from Line 3 tar sands…as the climate criminals keep on bulldozing the sacred. pic.twitter.com/NZThzn7FUG

Arrest comes with the territory of direct action. But Simone Senogles, an Anishinaabe water protector with the Indigenous Environmental Network, said she’s experienced unnecessary brutality in the process.

When she locked arms with other women to try and stop police from removing another protester from a tree last December, for example, she said a large male officer “pulled me hard by my arms to release me [and] wrestled me to the ground, holding down my head and shoulders.” She was held overnight with 11 other women in an Aitkin County jail cell designed for 8 people. Social distancing was not an option.

It’s the smaller things, though—the following, the stopping, the questioning, the feeling of being constantly watched—that are increasingly tearing at the community opposed to Line 3. “I feel like a meth addict,” said Tania Aubid, a member of the Mille Lacs Band of Ojibwe. “Things constantly trigger me. The sound of helicopters. Cops coming to the gate of the camp. Counterintelligence, how many people are here.”

Shanai Matteson, a non-Native water protector and lifelong resident of Aitkin County, said her young kids can feel it too. “My daughter told me she had a dream that we got stopped by police and they took me away. And she said ‘bring her back!’ but they didn’t.”

Women who participate in direct actions against the pipeline aren’t the only ones who report being followed and intimidated by Minnesota police, either. Rita Chamblin, a resident of Bemidji, holds trainings on how to legally monitor the pipeline’s construction for the group Watch the Line MN—but tells everyone to always take someone with them. “I don’t go out and monitor alone, and I’m an old white woman,” she said.

Female journalists covering Line 3 are not immune either. Lynn Mizner, a reporter for the Aitkin Independent Age, said she was once followed all the way home by a sheriff car after leaving the Water Protector Welcome Center. A few weeks ago, she was taken off the Line 3 beat because her editor was concerned for her safety. The source of the danger remains unclear.

And people talk. Everyone knows what everyone else has experienced. The change in the community’s aura feels palpable. “I don’t feel safe,” Sengoles said. “I walk by the officers in the grocery story every day knowing they’re preparing to beat me up”—and doing it with the help of Enbridge.

The officer who delayed Fonda’s press conference on Monday could have pulled over any one of the cars in the caravan. But she pulled over the one being driven by Mara Verheyden-Hilliard, a constitutional rights attorney here in Minnesota to observe police interaction with opponents of Line 3.

Verheyden-Hilliard is the executive director of the Partnership for Civil Justice Fund, and preparing to take legal action challenging Enbridge’s financial relationship with Minnesota police. “It’s been important for us to see firsthand what the conditions are like on the ground,” she said. “It helps us to be able to craft litigation to effectively address what is occurring.”

And what is occurring, exactly? “Enbridge is showering cash on county Sheriffs departments unlike anything the’ve ever seen,” she said. “The sheriffs and counties here are able to bill them for any time and material that they assert is relate to Line 3.”

“That means that any time they act against water protecters—surveil, suppress, follow, pull them over, arrest them, jail them—they get to bill for it,” she added. “They’re billing their actual time and overtime. This is not moonlighting.”

We are here now in Northern MN joining with @JaneFonda @zhaabowekwe @WinonaLaduke . Enbridge is incentivizing intense repression of water protectors paying huge $$ to sheriffs' offices through the "public safety escrow trust". We are preparing the legal challenge. #StopLine3 https://t.co/sybCDGqzzx

This appears to be true. Enbridge established a financial relationship with Minnesota law enforcement began in May 2020, when the state Public Utilities Commission approved Line 3’s route permit. That permit required the oil giant to set up a special fund that would reimburse police responding to anything pipeline-related.

This was great news for Minnesota’s cash-strapped police departments. For over a decade, individual city police departments had been shuttering due to budget woes, and county sheriffs had been picking up the slack without much increase in resources. Enbridge, it appeared, could help alleviate some pain.

Under the permit, police departments were informed they could get reimbursed by Enbridge for “maintaining the peace in and around the construction site” and “coordination services” related to maintaining public safety. More broadly, though, the permit said law enforcement could get reimbursed by Enbridge for any activity related to public safety and the pipeline.

So far, we know that activity includes the formation of the Northern Lights Task Force, a group of 18 county sheriff’s departments created specifically to combat and deter pipeline protestors, and inspired by the violent protests at Standing Rock.

But the full extent of what Enbridge is funding for Minnesota police remains unclear. The only evidence of invoices so far were published by Healing Minnesota Stories and The Intercept, showing a reimbursement request for “nearly $72,000 worth of riot gear and more than $10,000 in ‘less than lethal’ weapons and ammunition, including tear gas, pepper spray, bean bag and sponge rounds, flash-bang devices, and batons.”

We reached out to the Northern Lights Task Force and the Minnesota State Patrol to ask about the various accusations and their financial relationship with Enbridge. We haven’t heard back yet, but will update if we do.

In the meantime, Verheyden-Hilliard said she hopes the reports of intimidation inspire people to join the water protectors in their resistance. “There is growing recognition that police force against Black and brown communities perpetuates injustice. That’s also happening up here,” she said. “This is an act of fear from the corporation. They don’t want to see that this of solidarity.”

You can learn more about Verheyden Hilliard’s work here.