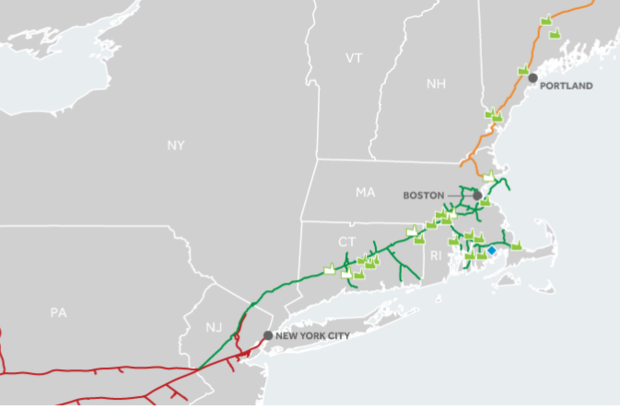 Above Photo: From masslive.com

Note: Southcoast Neighbors United put out a clear statement that this decision does not mean the battle is over and they must remain vigilant. The group continues to fight against a compressor station and will be in position to stop the pipeline if the company restarts the process.

For lack of policies that support project financing, another New England natural gas pipeline proposal has been put on ice.

The Houston-based Enbridge on Thursday suspended federal permitting for its $3.2 billion Access Northeast, which would upgrade 125 miles of the Algonquin pipeline system to serve around 60 percent of the New England power sector.

Enbridge had partnered with Eversource Energy and National Grid to advance the project through Algonquin Gas Transmission, LLC.

It is “no longer in the interest of stakeholders” to continue federal review of the project, a lawyer for Algonquin told public officials in a June 29 email. Inconsistent energy policies across the Northeast states are to blame, wrote Atty. Jon N. Bonsall of the Boston-based Keegan Werlin.

Natural gas pipeline developers have been seeking a mechanism for cost recovery in the New England states, such as a tariff on ratepayers. While an increasing number of power generators burn natural gas, they are reluctant to commit to binding contracts for the fuel, in the way that local gas distributors do.

An alternative finance mechanism where electric ratepayers would foot the bill for pipeline capacity on behalf of power generators was shot down last year by the Massachusetts Supreme Judicial Court.

Algonquin will restart the FERC process when the desired policy alignments are achieved, Bonsall wrote.

The Federal Energy Regulatory Commission received a preliminary application for the project in November of 2015. The partners had hoped to have the project in service by late 2018.

Access Northeast was first proposed by Spectra Energy Partners, which in February was acquired by the Calgary-based Enbridge in a $28 billion deal.

Enbridge has two other New England gas pipeline projects in its portfolio.

The $972 million Algonquin Incremental Market was put into service in 2017, adding another 342 million cubic feet of gas per day to the region. A lateral line connects to Salem Harbor, a former coal plant converting to gas.

The Atlantic Bridge project gained a conditional FERC certificate, but is not yet in service. It would include the Weymouth compressor and reverse the Maritimes & Northeast pipeline to push gas north through Maine toward Canada.