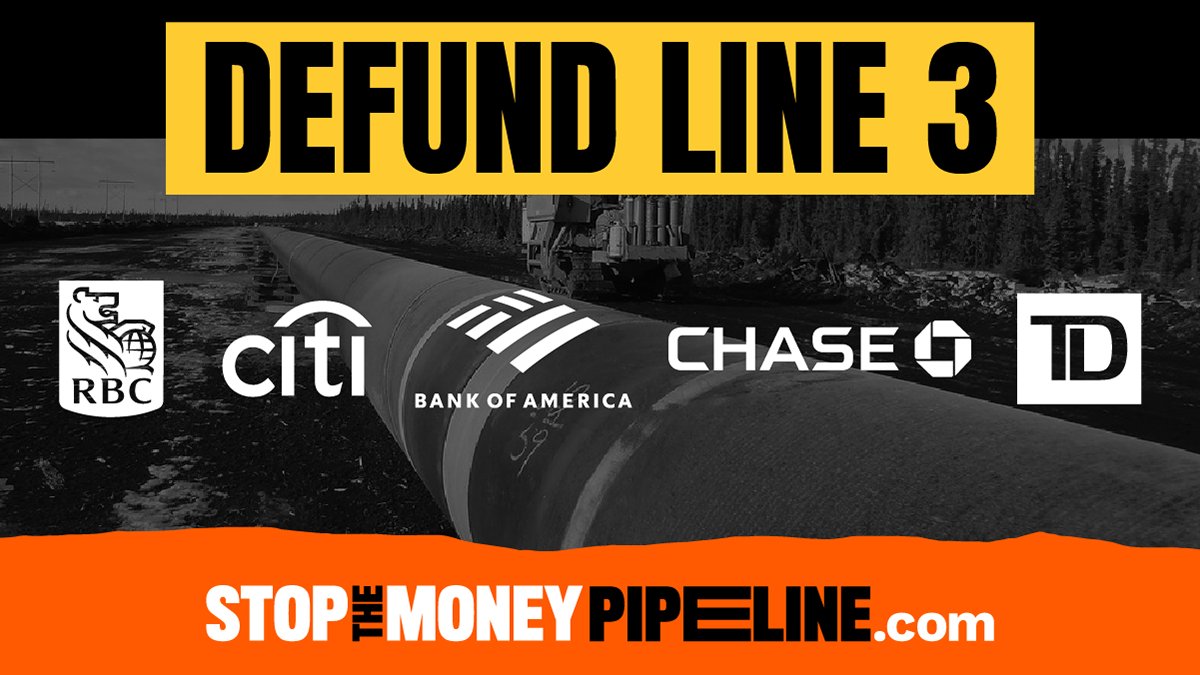 Enbridge’s Greenwashing Will Not Stand

There are now more than 130 Water Protectors facing criminal charges for protecting the land from the Line 3 tar sands pipeline. At the same time, the climate criminals are free to keep bulldozing through my peoples’ sacred lands.

It is physically painful to witness the land being ripped apart, to see our sacred manoomin being irrevocably harmed by a corporation that cares for nothing but profit. It is also deeply powerful to stand with those putting their bodies on the line to defend the land.

For months now, we’ve been taking steady, constant direct actions to delay the construction of Line 3. In the freezing cold of a Minnesota winter, people have crawled into pipes, stood in front of excavators, engaged in tree-sits, climbed 40ft bi-pods, delayed construction with prayers, and locked to pianos to block bulldozers.

Now, we are asking you to take action in your own community against the funders of the toxic Line 3 pipeline.

Nearly three weeks ago, I wrote to you about the launch of the #DefundLine3 campaign. Since then bank CEOs and executives have received more than 600,000 emails and nearly 1,500 phone calls, demanding that they stop funding Line 3.

When I launched this campaign, I told you that on March 31st, 18 banks have a $2.2 billion loan to Enbridge that was due for renewal. However, just a few days ago, we learned that the March 31st loan has been canceled. In its place, the same banks have given Enbridge an $800 million “sustainability” loan.

This is greenwashing at its worst. Giving Enbridge a sustainability loan is like giving a weapons manufacturer a “peace” loan; it’s like giving a cigarette company a “health” loan. Even if Enbridge does plan on building a few solar panels with that money, you can’t put a fire out and pour millions of barrels of tar sands on it at the same time.

When I heard about this new loan I felt sick. For months, I have watched Enbridge tear apart my people’s land so it can build an oil pipeline that would poison our water and release the same amount of greenhouse gas as 50 new coal-fired power plants.

You can find the tools, resources and support you need to to organize a #DefundLine3 action in your community here.

Activists in Minneapolis, Seattle and New York have already started staging protests at branches of the banks funding Line 3. Now, we’re asking you to join us and stage a #DefundLine3 protest in your community.

Whether you are able to organize a Covid-safe demonstration with your friends, or if you’re able to visit a local branch and deliver our #DefundLine3 petition directly to a bank manager, we’re calling on you to take action with us.

Back in 2016, as Water Protectors were facing police brutality at Standing Rock, just like we are right now in Minnesota, #DefundDAPL protests erupted at bank branches around the country. Millions of dollars were removed from banks supporting the pipeline. Major cities committed to breaking ties with the guilty banks. Now, we need to see that same energy to hold the banks accountable for funding Line 3.

Will you join us in taking action in your community?

Chase, Bank of America, Citi, TD Bank and Wells Fargo are still loaning billions to Enbridge so that it can build Line 3. In just a few months, those banks have loans worth $5.8 billion that are up for renewal.