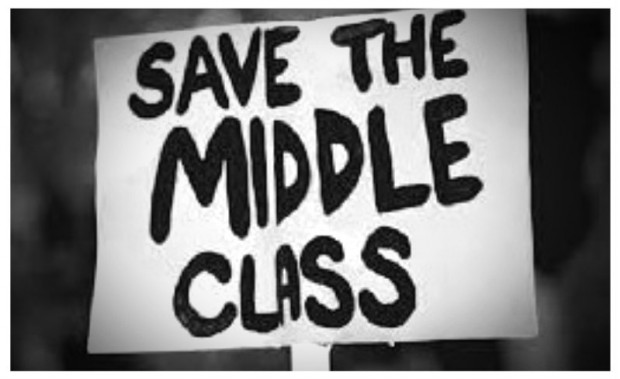 We just got more evidence that the middle class in America is dying.  According to brand new numbers that were just released by the Social Security Administration, 51 percent of all workers in the United States make less than $30,000 a year.  Let that number sink in for a moment.  You can’t support a middle class family in America today on just $2,500 a month – especially after taxes are taken out.  And yet more than half of all workers in this country make less than that each month.  In order to have a thriving middle class, you have got to have an economy that produces lots of middle class jobs, and that simply is not happening in America today.

You can find the report that the Social Security Administration just released right here.  The following are some of the numbers that really stood out for me…

That first number is truly staggering.  The federal poverty level for a family of five is $28,410, and yet almost 40 percent of all American workers do not even bring in $20,000 a year.

If you worked a full-time job at $10 an hour all year long with two weeks off, you would make approximately $20,000.  This should tell you something about the quality of the jobs that our economy is producing at this point.

So many people that I know are barely scraping by right now.  Many families have to fight tooth and nail just to make it from month to month, and there are lots of Americans that find themselves sinking deeper and deeper into debt.

If you can believe it, about a quarter of the country actually has a negative net worth right now.

What that means is that if you have no debt and you also have ten dollars in your pocket that gives you a greater net worth than about 25 percent of the entire country.  The following comes from a recent piece by Simon Black…

Credit Suisse estimates that 25% of Americans are in this situation of having a negative net-worth.

The thing is– not only did the government create the incentives, but they set the standard.

With a net worth of negative $60 trillion, US citizens are just following dutifully in the government’s footsteps.

As a nation we are flat broke and most of us are living paycheck to paycheck.  It has been estimated that it takes approximately $50,000 a year to support a middle class lifestyle for a family of four in the U.S. today, and so the fact that 71 percent of all workers make less than that amount shows how difficult it is for families that try to get by with just a single breadwinner.

Needless to say, a tremendous squeeze has been put on the middle class.  In many families, both the husband and the wife are working as hard as they can, but it is still not enough.  With each passing day, more Americans are losing their spots in the middle class and this has pushed government dependence to an all-time high.  According to the U.S. Census Bureau, 49 percent of all Americans now live in a home that receives money from the government each month.

Sadly, the trends that are destroying the middle class in America just continue to accelerate.

With a huge assist from the Republican leadership in Congress, Barack Obama recently completed negotiations on the Trans-Pacific Partnership.  Also known as Obamatrade, this insidious new treaty is going to cover nations that collectively account for 40 percent of global GDP.  Just like NAFTA, this treaty will result in the loss of thousands of businesses and millions of good paying American jobs.  Let us hope and pray that Congress somehow votes it down.

Another thing that is working against the middle class is the fact that technology is increasingly taking over our jobs.  With each passing year, it becomes cheaper and more efficient to have computers, robots and machines do things that humans once did.

Eventually, there will be very few things that humans will be able to do more cheaply and more efficiently than computers, robots and machines.  How will most of us make a living when that happens?…

The robopocalypse for workers may be inevitable. In this vision of the future, super-smart machines will best humans in pretty much every task. A few of us will own the machines, a few will work a bit… while the rest will live off a government-provided income…the most common job in most U.S. states probably will no longer be truck driver.

For decades, we have been training our young people to have the goal of “getting a job” once they get out into the real world.  But in America today there are not nearly enough good jobs to go around, and this crisis is only going to accelerate as we move into the future.

I do not believe that it is wise to pin your future on a corporation that could replace you with a foreign worker or a machine the moment that it becomes expedient to do so.  We need to start thinking differently, because the paradigms that worked in the past are fundamentally breaking down.

So what advice would you give to a young adult today that is looking toward the future?