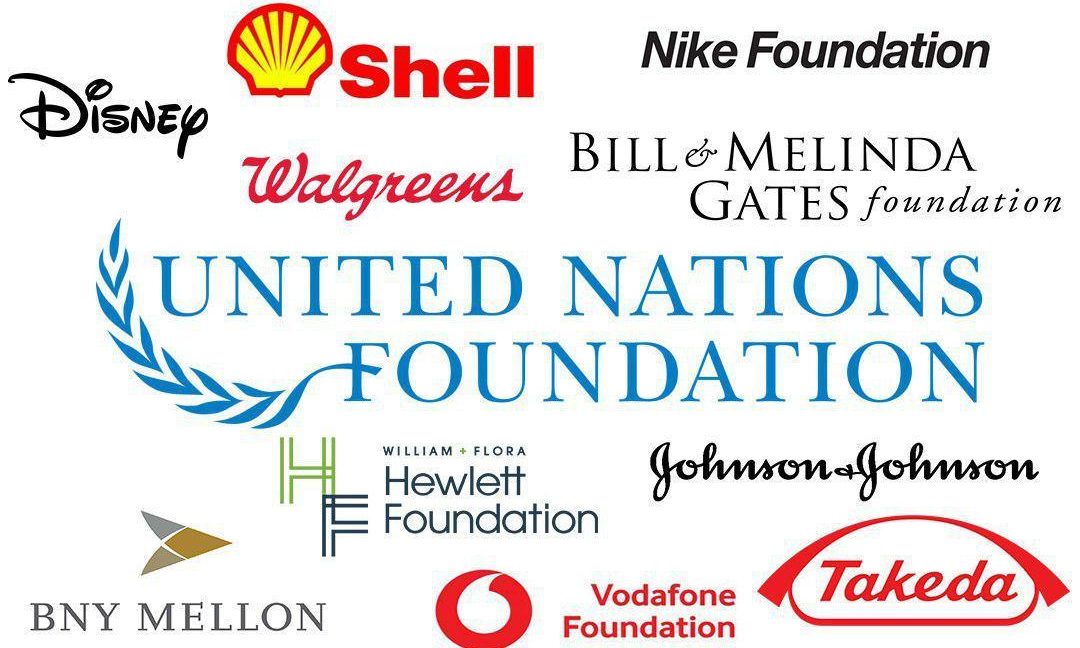 Above photo: From Wrong Kind of Green.

The UN Secretary General and the World Economic Forum signed on June 13 a Strategic Partnership Agreement for the implementation of the 2030 agenda (SDG). More than 240 organisations signed the following letter demanding the end of the agreement and denouncing it for formalising the corporate capture of the UN and moving towards an increasingly privatized and less democratic global governance.

We the undersigned call on you to terminate the recently signed United Nations-World Economic Forum strategic partnership agreement.

We are very concerned that this WEF-UN partnership agreement will de-legitimize the United Nations and provide transnational corporations preferential and deferential access to the UN System. The UN system is already under a big threat from the US Government and those who question a democratic multilateral world. However, this corporatization of the UN poses a much deeper long-term threat, as it will reduce public support for the UN system in the South and the North.

For more on this topic, listen to our interview with Harris Gleckman about the Global Redesign Initiative of the World Economic Forum on Clearing the FOG.

It is our strong belief that this agreement is fundamentally at odds with the UN Charter and with intergovernmental decisions on sustainable development, the climate emergency, and the eradication of poverty and hunger. This public-private partnership will permanently associate the UN with transnational corporations, some of whose core essential activities have caused or worsened the social and environmental crises that the planet faces. This is a form of corporate capture. We know that agribusiness destroys biodiversity and sustainable and just food systems, oil and gas corporations endanger the world’s climate, Big Pharma weakens access to essential medications, extractive corporations leave lasting damage to countries’ ecologies and peoples, and arms manufacturers profit from local and regional wars as well as repression of social movements. All these sectors are significant actors within the World Economic Forum.

The provisions of the strategic partnership effectively provide that corporate leaders will become ‘whisper advisors’ to the heads of UN system departments, using their private access to advocate market-based profit-making ‘solutions’ to global problems while undermining real solutions embedded in public interest and transparent democratic procedures. The WEF agreement with the UN, and all other forms of corporate capture, seriously undermines the mandate of the UN as well as the independence, impartiality and effectiveness of this multilateral body, particularly in relation to the protection and promotion of human rights. For example, in the current discussions on a Treaty to regulate business activities, corporate capture of the UN – or undue interference by corporations on the UN – is weakening and compromising its ability as a multilateral body of government to hold businesses to account. Similarly, companies are increasingly making financial threats on governments and the UN when mandates are working on corporate accountability, the OHCHR mandate of the UN database on business in/with Israeli settlements is one example.

The UN’s acceptance of this partnership agreement moves the world toward WEF’s aspirations for multistakeholderism becoming the effective replacement of multilateralism. WEF in their 2010 The Global Redesign Initiative argued that the first step toward their global governance vision is ‘to redefine the international system as constituting a wider, multifaceted system of global cooperation in which intergovernmental legal frameworks and institutions are embedded as a core, but not the sole and sometimes not the most crucial, component.” The goal was to weaken the role of states in global decision-making and to elevate the role of a new set of ‘stakeholders’, turning our multilateral system into a multistakeholder system, in which companies are part of the governing mechanisms. This would bring transnational corporations, selected civil society representatives, states and other non-state actors together to make global decisions, discarding or ignoring critical concerns around conflicts of interest, accountability and democracy.

We call instead for strengthening peoples’ sovereignty, deepening democratic multilateralism and countering the further expansion of multistakeholderism. Public interest civil society organizations and social movements have played crucial roles in upholding human rights and environmental agreement and in the development of intergovernmental positions on a wide range of global crises over the past 75 years. To strengthen public support for the UN system for its next 75 years, we believe that your office as well the executive offices of the specialized agencies should host public consultations on the future institutional role and engagement mechanism with the most affected communities and organizations of the people, including among others women, workers, peasants, fisherfolk, indigenous peoples, LGBTQ , human rights defenders, educators, youth, and scholars. These communities which are human rights holders and are committed to preserving the common wellbeing of people and the environment; as well as to building a stronger, independent, and democratic international governance system must be treated differently from “stakeholders” who only have profit at stake.

UN should adopt effective mechanisms that can prevent cases of conflict of interest consistently throughout the entire system. Any policy in this regard should bear in mind the different roles of private interest and of rights-holders that look after common goods and benefits. Those private interests whose activities are in conflict with UN goals and objectives should not be involved with intergovernmental bodies or the Secretariat, whose focus should always be on protecting common goods and providing global public benefits.

Mr Secretary-General, electing to build an alliance between the Secretariat and transnational corporations to save the UN system from those hostile to multilateralism and decreasing public funding, will destroy the UN system, not save it.

Copied to President of the General Assembly, the President of the Security Council and the Chair of the G77 with a request that this letter be circulated to all Governments as an official document.