Ending Militarization Of Our Communities

Above: From Stop The Militarization of Police Facebook page.

In recent weeks Popular Resistance has focused on the escalation of US militarism around the world, especially in the Middle East with the assassination of General Soleimani, US troops staying in Syria to take their oil and the US refusing to leave Iraq despite being asked to leave. The US is in the midst of a potential escalation toward full-scale war in the Middle East once again.

However, militarism abroad is mirrored by militarism at home, especially in poor, black and brown communities. There is a long history of attacks on these communities. Now, the Department of Justice’s new Operation Relentless Pursuit threatens seven cities with more militarized police who view people in these communities as the enemy. This escalation of the war at home must be stopped and people are offering positive alternatives to militarization.

Join us at the conference of the United National Antiwar Coalition,
“Rise Against Militarism, Racism and the Climate Crisis
Building Power Together”
February 21, 22, 23, at the People’s Forum in New York City 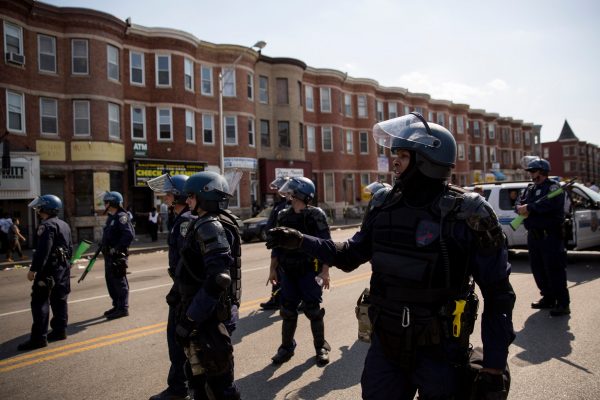 The US Department of Justice announced a new $71 million program, Operation Relentless Pursuit, which will escalate law enforcement in seven cities focusing on poor, black and brown communities. In addition to increased spending, the DOJ will bring enforcement personnel from the Bureau of Alcohol, Tobaccos, and Firearms, the Drug Enforcement Agency, the FBI, and US Marshals to Albuquerque, Baltimore, Cleveland, Detroit, Kansas City, Memphis, and Milwaukee.

These types of federal enforcement programs have a long history dating back to the Law Enforcement Assistance Administration that existed from 1968 to 1982, to the Weed and Seed program that began in 1997 under the Clinton Administration with $28.5 million and continues today. There are numerous similar programs and federal-state law enforcement task forces. They have resulted in increased arrests and mass incarceration without investing in communities or solving the root causes of crime.

In the graph below, the Sentencing Project shows how the number of people in prison in the United States took off starting in the late 1960s and early 1970s. Mass incarceration is a direct result of changes in policy governing law enforcement and the judicial system such as the war on drugs and mandatory minimums for sentencing. It is also driven by the privatization of prisons. Prison corporations sign contracts with governments that guarantee a certain level of occupancy creating an obligation by the state to incarcerate people. 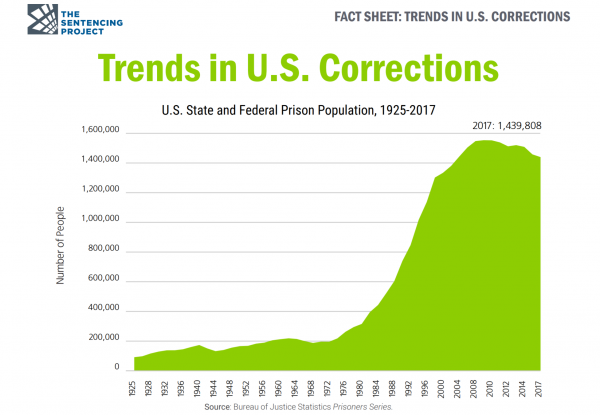 The United States is the “greatest purveyor of violence,” as Dr. Martin Luther King Jr. said, both abroad and at home. Just as the US openly killed the foreign military leader of a country we are not at war with, in the US, police brazenly kill on average more than 1,000 people per year or about three people per day. Black men are three times more likely to be killed by police than white men. Latino men’s risk of being killed by police is about 40 percent higher than the risk faced by white men. Men are 10 times more likely to be killed by police than women. Racial inequality in risk extends across gender.

In fact, the total number of civilians killed by police in the United States greatly surpasses the number of US troops killed in Afghanistan and Iraq where 39 soldiers were killed in 2019 and 48 in 2018.  China, whose population is 4.5 times the size of the United States, recorded 3 killings by law enforcement officers in 2018 and 2019 combined. Police in the US kills citizens at over 70 times the rate of other first-world nations.

Many people in heavily-policed communities do not feel safer when they see police in their neighborhoods. Too many feel like the police are an occupying force that gets away with murder. The violence of police leading to the death of civilians has become more widely known and understood as people developed the ability to report them through social media. Well-known killings such as Mike Brown in Ferguson, MO, Eric Garner in New York City, Freddie Gray in Baltimore, MD and so many others have resulted in large nationwide protests.

In response, residents of some cities have elected prosecutors who seek to control police violence but they are running up against a system that thwarts their efforts. The Circuit Attorney in St. Louis, Kimberly Gardener, is suing the city, the police union and others using a law designed for the KKK for a “racist conspiracy to stop her from doing her job.” She is being attacked personally and her efforts to hold people accountable and reopen corrupt convictions are being blocked. In many cities where prosecutors are trying to reform the system, police unions are retaliating against them. 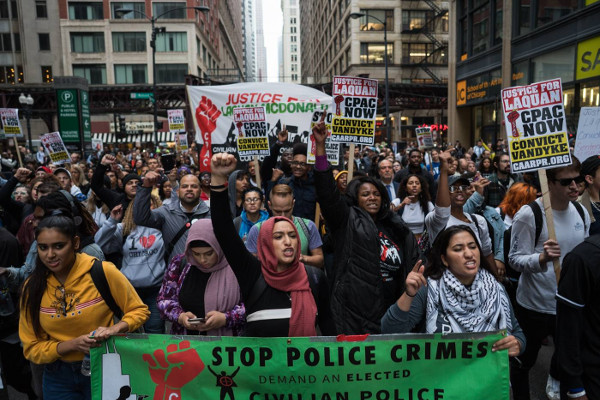 Communities are organizing to reign in abuse by police. There is a growing campaign for community control of the police in which residents would decide who polices their communities and how they do so. They would be able to fire police who are abusive, racist or violent and make sure police are trained to ‘protect and serve.’ People are seeking to put in place  Civilian Police Accountability Councils that give broad powers to a democratically-elected council. This would replace the charade of civilian police review boards, which are appointed and often do more to protect the police than to hold them accountable. 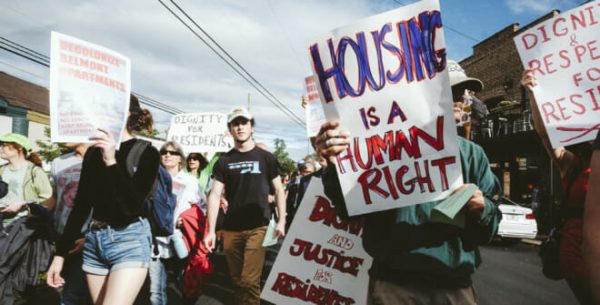 Invest in the Poor, Not Police, and End the Drug War

Jacqueline Luqman, whom we interviewed on Clearing the FOG, points to basic solutions that would reduce crime by investing in poor communities instead of investing in more police. In our city, Baltimore, the police receive more resources from the city government than the health department and schools combined. Luqman says:

“There are some pretty common-sense responses. Provide people jobs. Stop taking people’s homes. Make sure that people have affordable places to live. Increase the number of truly affordable housing and provide some type of tax benefit for working people so that they can keep their homes. Definitely invest in public schools. Provide resources and programs for kids and recreation centers. Restore the recreation centers that were closed especially in places, like Baltimore. Provide subsidized mental health treatment and substance abuse treatment for people who need it. If we do those things, crime will go down.”

Luqman highlights that another driving force in crime is the illegality of drugs. Drug use has been treated as a police issue for many decades, resulting in mass arrests and mass incarceration with a racially disproportionate impact on black and brown communities. Police are not equipped to solve the health and social problems of drug abuse.

Rather than continuing to use the same mistaken policies, the US needs a new approach to drug issues. So far eleven states have legalized adult use of marijuana and prosecutors in some cities are no longer prosecuting low-level marijuana offenders. The Atlanta Police Department is disbanding its special Narcotics Unit and reassigning officers to other units to address violent crime. Homicides in Atlanta for 2019 were up 9 percent over 2018, and 19 percent over 2017.

Legal access to heroin or public injection facilities as well as controlled access to heroin have had dramatic impacts on crime and health. Studies conducted in six countries – Switzerland, the Netherlands, Spain, Germany,  Canada, and England – show many positive benefits. These programs have reduced crime related to the acquisition of drugs, reduced drug markets, and public drug use, lowered the cost of health care and criminal justice as well as promoted employment and family life. Where people can purchase legal heroin for 10 percent of the cost of illegal heroin, it resulted in a 50 percent reduction in crime for those in the program as well as reductions of homelessness, unemployment and drug use.  As a result of people stabilizing their lives and forming positive relationships, people stopped their heroin use so this approach is now called Heroin Assisted Treatment.

With the United States imprisoning almost twenty-five percent of all people imprisoned in the world, even though we only have 5% of the world’s population, it is time to demand these commonsense, effective and humane approaches. Programs such as Operation Relentless Pursuit pour more money into a failed approach that terrorizes oppressed communities, breaks families apart and murders residents. We need to recognize that a country that recklessly murders people abroad will do the same at home. We need to end all wars by investing in programs that provide for people’s basic necessities instead of investing in programs that are designed to kill.