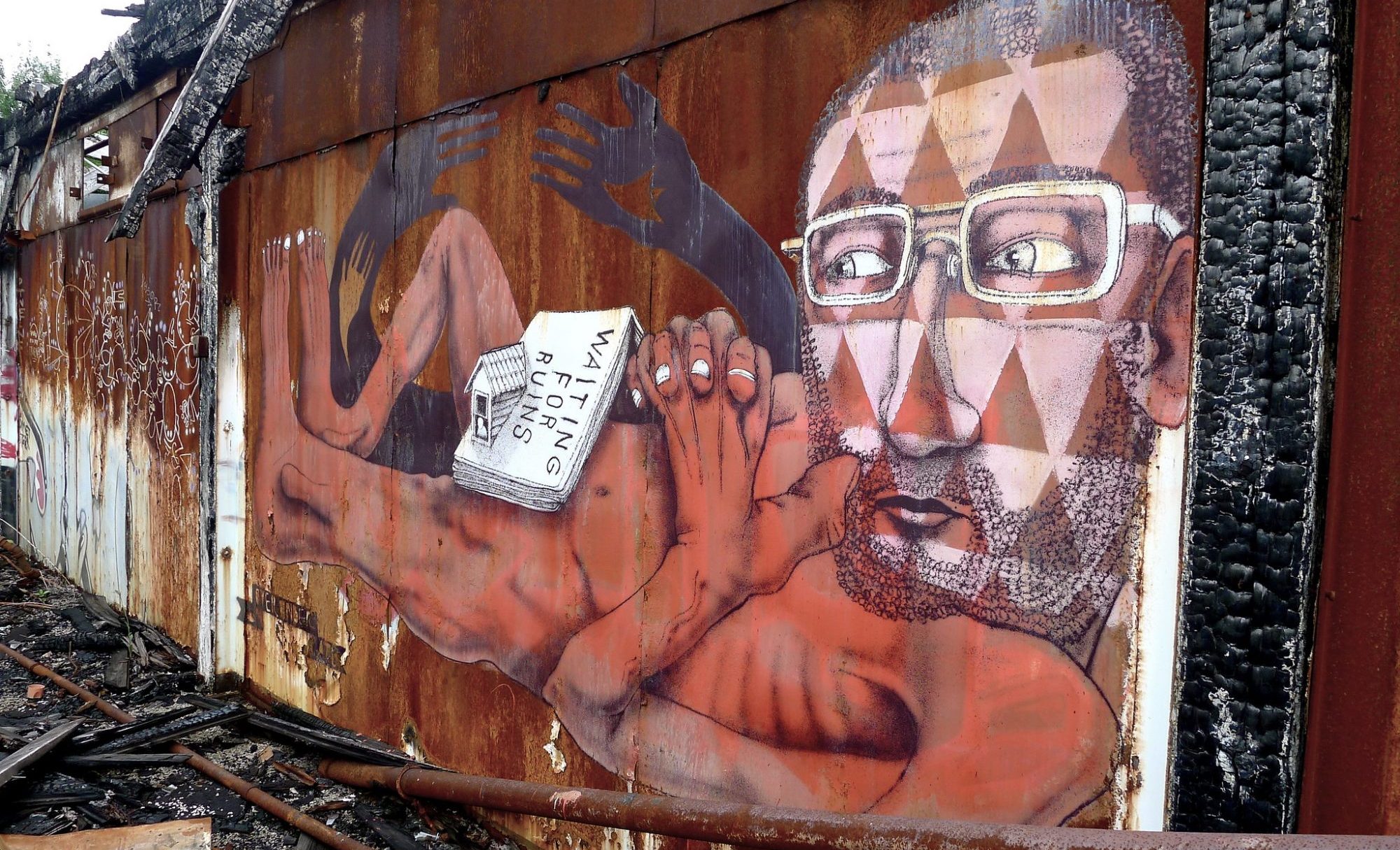 To censor is an act of deprivation, a taking away.

To enforce an intolerant orthodoxy is an act of imposition. The two cannot be understood separately from one another.

YouTube’s decision to remove a Consortium News CN Live! segment on Feb. 24 formidably takes its place among many such incidents involving numerous social media carriers and the enterprises that use them to disseminate information.

The video-sharing platform, which has been a Google property since 2006, subsequently rejected an appeal lodged by Joe Lauria, editor of Consortium News. Lauria has since published extensively on these events, and his commentaries are readily available. The webcast in question is not: Silicon Valley technicians of no discernible qualifications in such matters still prevent you from seeing it.

It is time, then, to sit up and look squarely at the grave threats with which a creeping, apple-pie authoritarianism now faces us. Censorship and its sibling, official propaganda, have lately come to imperil our civil liberties, our civil rights — especially our right to express ourselves freely— and altogether our right to knowledge, our right to understand the world we live in and the events that shape it, and at last our right to shape those events.

Compared to these, the supposed threats of the Jan. 6 protests on Capitol Hill and the running, no-evidence business of the Russians having intruded into hundreds of corporate and government computer systems are nothing.

Numerous are the voices raised in opposition to this menacing, corrosive drift in America. But too few grasp the gravity of our shared predicament. Complacency — complacency induced by propaganda, indeed — is another of our urgent problems.

The Past Is Another Country

One can read in any history book about suppression and repression and the incessant repetition of officially approved perspectives to the exclusion of all dissenting views. But the past is another country in the American mind, ever distant.

Such circumstances are supposed to befall others but never Americans. We customarily identify grim polities of this kind and blighted pubic space with the Soviets, or the Latin American dictators, or the too-numerous-to-name despotic regimes that fill history texts.

This is our exceptionalist consciousness at work: “It can’t happen here,” as Sinclair Lewis titled the anti-fascist novel he published — note the date — in 1935. It has not happened here — let us not succumb to language inflation — but we are now on notice that it can. Overcoming exceptionalism, even among those who purport to reject its ideology, is where the project must begin.

When we are sitting up, we owe it to ourselves and those around us to get up. If we are to defend our rights as just enumerated, it is up to each of us to act. And taking part in a patently broken electoral system — this is my personal view —can no longer be considered acting: It amounts to acquiescing. “Aux armes, citoyens!” is a thought I leave to other sorts of columnists. My salutation is simpler: “Arise!” will do. We had better wake up, this is to say, if we are to avert a very dark age and reinvent the country and its institutions—which, forget about reform or restoration, is what must be considered the imperative now.

If the CN Live! incident is one among many, it is entirely indicative of the censorship regime social media platforms now impose upon us. In the Feb. 24 segment, Lauria interviewed Greg Palast, a journalist who covered the hotly contested Senate run-off elections in Georgia not long earlier. The topic was the efforts of Republicans to suppress minority voters to tilt the outcomes. As part of this campaign, these Republicans brought 60 lawsuits contesting the November presidential results, all of which were thrown out of court.

We Can No Longer Report

This was straight reporting and a discussion of same, nothing more. There was no question of condoning or validating those who attempted to subvert the November or the Georgia polls. Lauria, a longtime correspondent for many mainstream dailies, would have it no other way. We find ourselves, then, in a circumstance wherein one can no longer even report on newsworthy developments if they require reference to other-than-orthodox points of view.

Lauria has reproduced YouTube’s policy covering these matters in his commentaries. It is worth quoting again:

“Content that advances false claims that widespread fraud, errors, or glitches changed the outcome of the U.S. 2020 presidential election is not allowed on YouTube.”

The Lauria–Palast exchange had nothing to do with the presidential elections, but this seems to matter not at YouTube.

The more important question here is raised everywhere censorship is now imposed. According to whom are this, that, or the other claims, theses, or narratives false? According to whom are some other claims or narratives the true and only claims and narratives? Who is the arbiter in all such cases? Nobody ever asks, for to ask this would lead us precisely to the question we truly must not pose: On what grounds do mainstream media, the Silicon Valley social media, and the liberal elites of the Democratic Party propose to possess unassailable truths and to have the right to impose them on others?

There are other features of this incident worth noting as common to other cases. By any serious definition of journalism, the suppression of the video segment in question was erroneous. What YouTube initially issued as a “warning” was without explanation redefined as a “strike,” as in three and Consortium News is banned from YouTube altogether. No explanation for this has been forthcoming. Since YouTube rejected Lauria’s appeal, Consortium News has had no further means of connecting with the platform’s content police.

Does the dehumanized aspect of a process that is preposterous to begin with strike anyone else as redolent of the Soviets or East Germans or Czechs at their worst? I am damned if it does not read like some edited-out passage in The Joke, Milan Kundera’s mid–1960s novel about fun and games in a Soviet satellite. It couldn’t happen there either, you see.

A paranoid columnist, some will say. Kundera was subjected to state-imposed suppression of dissent and wall-to-wall censorship, and there is none of that here. No comparison.

Well, then, let us now praise infamous men (and women).

If it is not obvious that the Silicon Valley people now making America a censored society are wholly incompetent to weigh in on the moral, ethical, and constitutional questions at issue, it should be. These are post-adolescents who appear to be poorly educated in anything other than computer science. They know nothing of history, so far as one can make out—and certainly not the history pertinent to what they are doing.

Silicon Valley techies and algorithm managers are merely doing the wet work, so to say. Readers ought to know this, too. The chief executives of Google, Twitter, Facebook, and the like have been hauled into Senate hearings rooms three times over the past six months, during which the campaign to legitimize censorship in a nominally free society has gained much of its momentum. Senators such as Diane Feinstein, the frightening California Democrat, have made their point plain: Get this done, young men. We will not leave you alone until you do.

Anyone who thinks this does not net out to official censorship has an internalized censor at least as effective as those walking around on Capitol Hill and in Palo Alto.

To censor is an act of deprivation, a taking away. To enforce an intolerant orthodoxy is an act of imposition. The two cannot be understood separately from one another. This is why the campaign to censor dissent coincides with an onslaught of official propaganda every bit as rigorously prosecuted.

Mainstream media, in this latter case, assume the complementary role: While social media platforms suppress dissent, corporate media purport to wage a war against “disinformation” that — as proven in case after case— is propaganda replete with disinformation.

Jacques Ellul published Propaganda: The Formation of Men’s Attitudes in 1962 (1968 in English). It is a searing, exhaustive critique in which the French philosopher and Christian anarchist described propaganda as most powerful when used to manipulate domestic audiences.

“Effective propaganda can work only inside a group, principally inside a nation,” Ellul wrote. “To make the organization of propaganda possible, the media must be concentrated, the number of news agencies reduced, the press brought under single control, and radio and film monopolies established.”

Ellul, it is to be noted, was also a critic of technological societies. Technology, he asserted, is not a neutral means of delivery, empty of content. It shapes minds to conform to the society that produced it and has everything to do with imposing the power of that society’s orthodoxies (which we euphemize as the wholesome notion of “values”).

These are our circumstances. Ellul considered propaganda the gravest danger facing advanced societies. Our condition in 2021 ought to bring readers over to his side on this point.

The mainstream of the Democratic Party wages its war by censorship and propaganda to impose precisely the “soft despotism” Alexis de Tocqueville warned us of 190 years ago. Mainstream media, perfectly on board in this pursuit, are also fighting a rear-guard action against the loss of a monopoly on public discourse that has endured for centuries. Do we wonder that it is mainstream media, from The New York Times on downward, who cheerlead the censorship brigades loudest?

This imposes a tremendous new responsibility on independent media such as Consortium News. It is they who threaten the just-noted monopoly. The responsibility that now comes to them is outsized to their resources, but in the best outcome, these media will prove increasingly effective in assuming it.

In this connection, let us hold up the intensifying censorship and propaganda campaigns that now beset us as mirrors to reflect back upon us. Would the concentrated monopolies Ellul described be waging this war were their positions secure? In my question, as so often, lies my answer.

Patrick Lawrence, a correspondent abroad for many years, chiefly for the International Herald Tribune, is a columnist, essayist, author and lecturer. His most recent book is Time No Longer: Americans After the American Century. Follow him on Twitter @thefloutist. His web site is Patrick Lawrence. Support his work via his Patreon site.