Above Photo: The march against Death Alley in St. John the Baptist, Louisiana, on the first day of a five-day march. Credit: All photos and videos by Julie Dermansky for DeSmog

On May 30, around 100 people took part on the first day of a planned five-day march for environmental justice in Louisiana’s Cancer Alley. Amid sweltering heat, the march kicked off in St. John the Baptist Parish, but extreme obstacles have developed on their route to Baton Rouge, about 50 miles away. Today a judge ruled that the organizers did not have permission to cross two bridges along the route.

Louisiana’s Cancer Alley, an 80-mile stretch along the Mississippi River, is also known as the “Petrochemical Corridor,” where there are over 100 petrochemical plants and refineries. An increasing number of facilities are slated to be built in primarily African-American communities concentrated in St. James Parish, midway along this corridor. Some of the plants still in the permitting process include the Chinese-owned Wanhua chemical plant, the Taiwanese-owned Formosa plastic manufacturing plant, and Texas-based Syngas methanol facility. All have received a green light on the local level, but the plants still need permits from Louisiana’s Department of Environmental Quality (DEQ).

The Coalition Against Death Alley (CADA), a group of Louisiana-based residents and members of various local and state organizations, is calling for a stop to the construction of new petrochemical plants and the passing of stricter regulations on existing industry in the area. CADA members, which include the groups RISE St. James, Justice and Beyond, the Louisiana Bucket Brigade, 350 New Orleans, and the Concerned Citizens of St. John, have been showing up in force and expressing their opposition at parish council meetings and other state regulatory hearings. 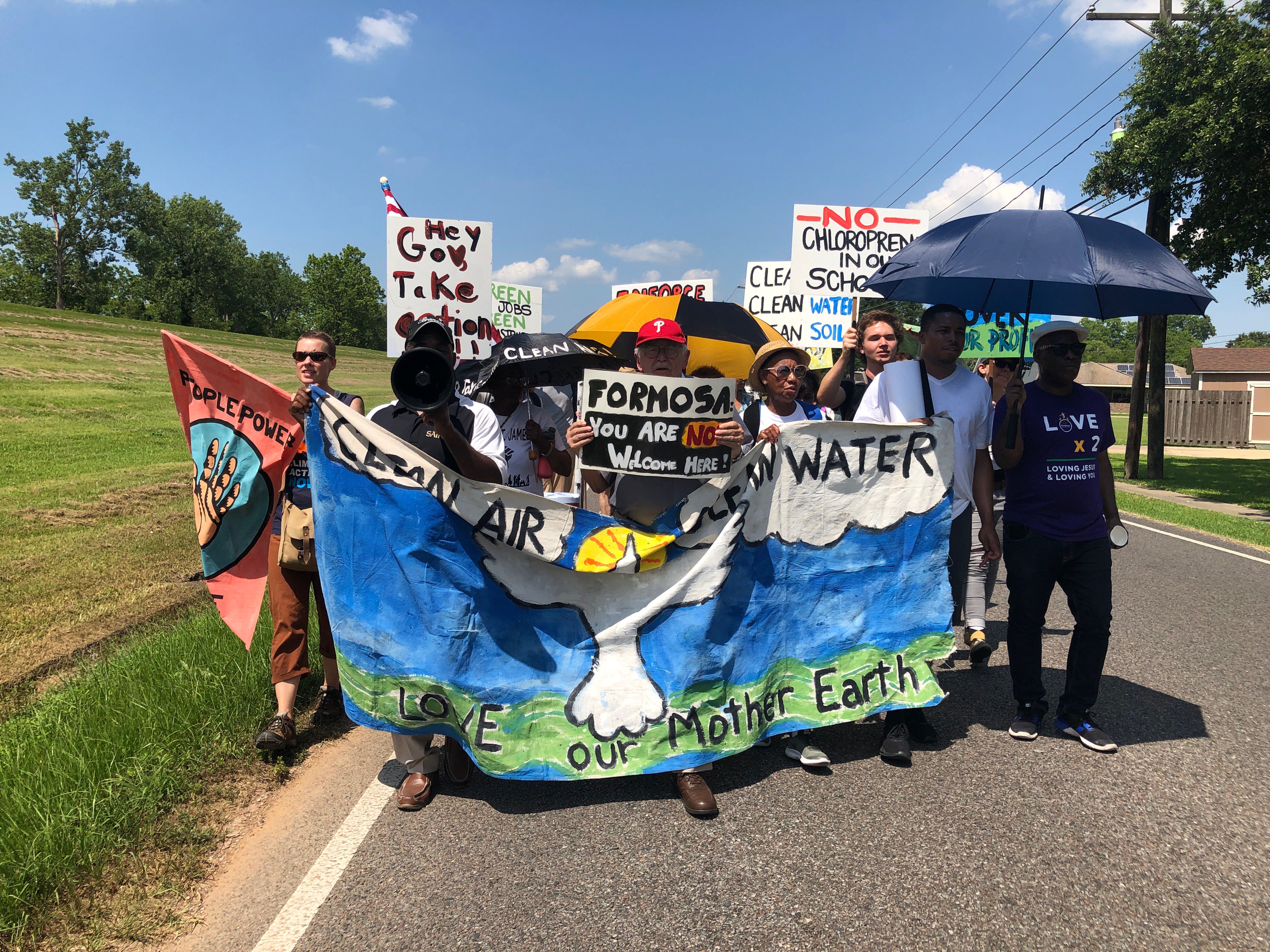 Coalition Against Death Alley marchers in St. James Parish, Louisiana, on May 31, the second day of the planned five-day march.

While the coalition’s members have yet to convince local representatives to reject any of the proposed petrochemical plants, their efforts have slowed the permitting process by presenting information that led to the tabling of certain decisions. Some of the proposed permits end up with added stipulations. However, none of the changes satisfy community members who oppose the addition of any new plants in their neighborhoods, which already grapple with toxic emissions from existing plants and industrial installations. 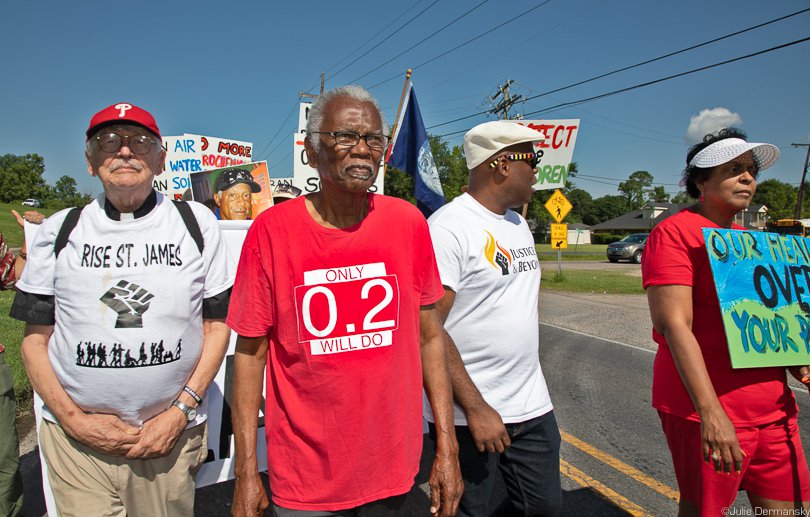 Robert Taylor and Sharon Lavigne, leading the march in St. John the Baptist Parish on May 30. 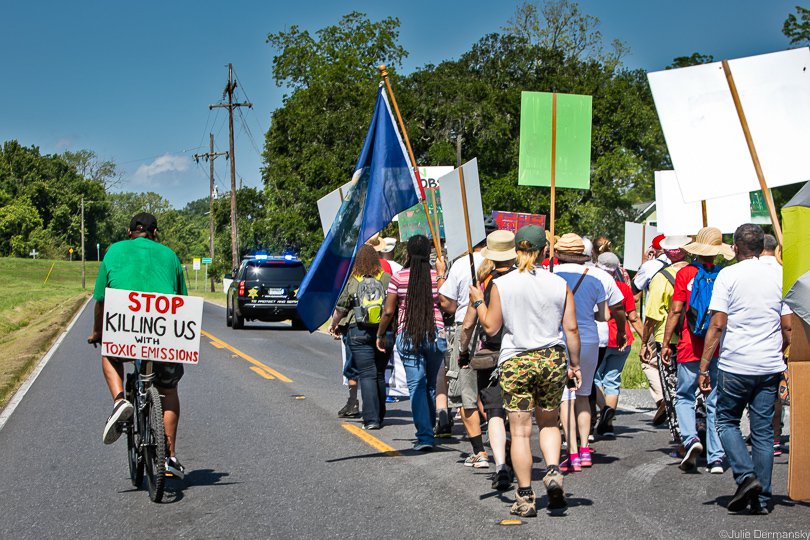 On May 31 day, two of the march, CADA met in Baton Rouge where a hearing took place over the State’s rejection of permits for the coalition to march over two Mississippi River crossings — the I-10 Bridge in Baton Rouge and the Sunshine Bridge in St. James Parish. The group restarted its march this afternoon.

Members of the Coalition Against Death Alley filed a series of legal actions against Louisiana Governor John Bel Edwards, the Secretary of the Louisiana Department of Transportation and Development, and the Superintendent of the Louisiana State Police. Their suit claims that the permit rejections deny them of
their constitutional rights of free speech and freedom of assembly.

Early this afternoon, Pam Spees, from the Center for Constitutional Rights and a CADA attorney, told me with disappointment in her voice that the judge ruled against them, denying those permits based on a 1960 law about obstructing highway commerce. Holding back tears, Spees delivered the news before the marchers set off on the second leg.

Her voice cracked as she explained the statute cited that could lead to felony charges and a 15 year sentence. The marchers are now faced with the dilemma of risking a felony arrest or changing their route over the next two days and will make a decision after the news sinks in.

A Long History of Pollution

Robert Taylor at CADA press conference on May 30. 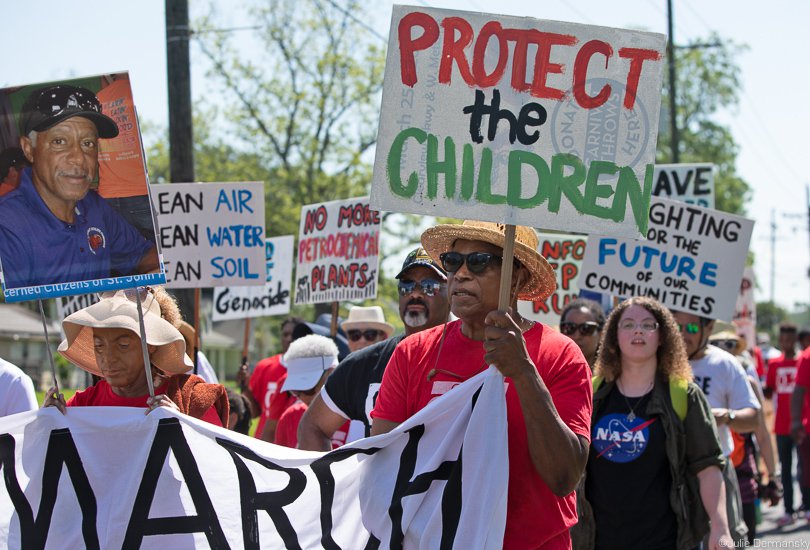 CADA marchers walk along Highway 44 as the temperature soars to over 90 degrees F.

Yesterday, Robert Taylor, director of the Concerned Citizens of St. John and a CADA member, led the first leg of the protest march. When the marchers passed the Denka Performance Elastomer neoprene manufacturing plant in LaPlace, Taylor called out Chuck Carr Brown, the head of the Louisiana Department of Environmental Quality (LDEQ), asking him to step down. “Brown has failed to protect us,” he said. 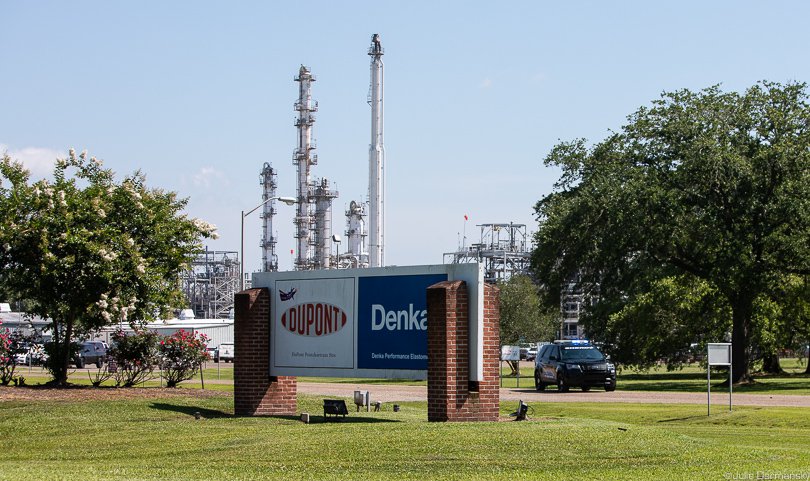 Security in front of the Denka neoprene plant, a former Dupont facility, in St. John the Baptist Parish during the CADA march.

The neoprene plant emits chloroprene, a chemical recently reclassified as a likely human carcinogen by the U.S.Environmental Protection Agency (EPA). According to a 2015 EPA assessment, residents that live near the plant, including Taylor and his family, have a lifetime cancer risk from air pollution that a is 800 times higher than the national average. Those living in the six parishes closest to the Denka facility have the highest risk of air pollution-caused cancer in the country.

In January 2017, Denka agreed to reduce chloroprene emissions by 85 percent, but this May, over a year later, the LDEQ took the company to task for not meeting that reduction mark. The company disputes the regulator’s charge and stated in an email to DeSmog that it is “currently developing a snapshot of emissions after completion of the optimization period that will show the full impact of its projects and its achievement of the 85 percent goal to submit to LDEQ.”

Even if Denka is able to cut emissions of chloroprene by 85 percent, the remaining emissions will still be significantly higher then the 0.2 micrograms standard that the EPA recommended. 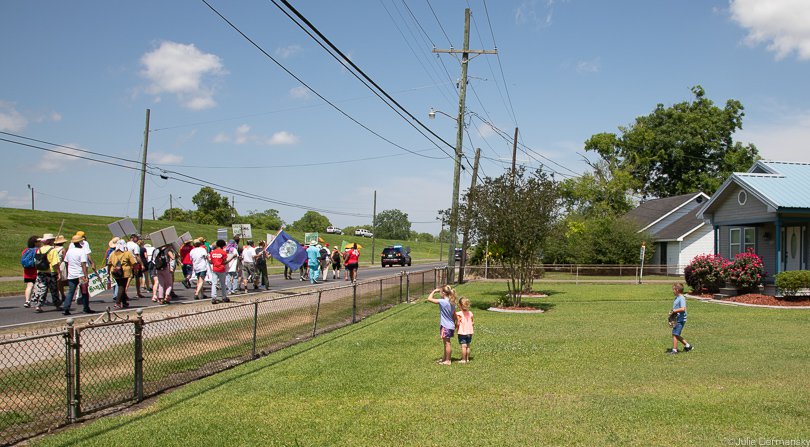 Children watch the CADA march on Highway 44 in Reserve, Louisiana.

CADA refers to the State’s failure to protect majority-black communities in Louisiana’s Cancer Alley as an “ongoing silent genocide.” During the march, CADA members chanted “Chuck Carr must go,” “DuPont/Denka, stop killing our babies,” and “We deserve the right to live.”

Taylor pointed out, “Chuck Carr Brown has the power to shut down the plant,” but Brown has stated during parish council meetings that he doesn’t see the emissions as a health emergency. The Concerned Citizens of St. John has repeatedly called for Brown to use his authority to make the plant cut its production until it can meet the EPA’s recommended standard, but the top state environmental official has refused to do so.

CADA’s march is being followed by local officials and leaders in the fossil fuel industry. Randy Hayden, president of Louisianians for Energy, an organization defining itself as “a grassroots effort to defend Louisiana’s oil and gas economy and jobs,” put out a press release in response to the march.

“The wellbeing of Louisiana residents is of the utmost importance,” says the release. “Fortunately, our state’s energy industry continues to operate safely and efficiently each and every day.”

I asked Hayden if he was suggesting there was no need for improvement in the oil and gas sector, if no companies had been found out of compliance with the rules over the last couple years, and who funds his group. I did not receive a response.

Hayden is also the executive director of the Louisiana Propane Gas Association. The Louisianans for Energy website was registered December 20, 2017, as activist battles over the Bayou Bridge pipeline construction through the state were heating up. On the website’s sparse resources page, one of its two links point to an Energy Transfer-funded study about the potential economic impacts of the Bayou Bridge pipeline, which Energy Transfer owns. In addition, Hayden runs the public relations company Creative Communications, which lists as a client the powerful Republican lobbying and PR firm DCIGroup, LLC. DCI Group has been tied to a number of fake grassroots (also known as “astroturf”) groups, including one supporting Energy Transfer’s Dakota Access pipeline. 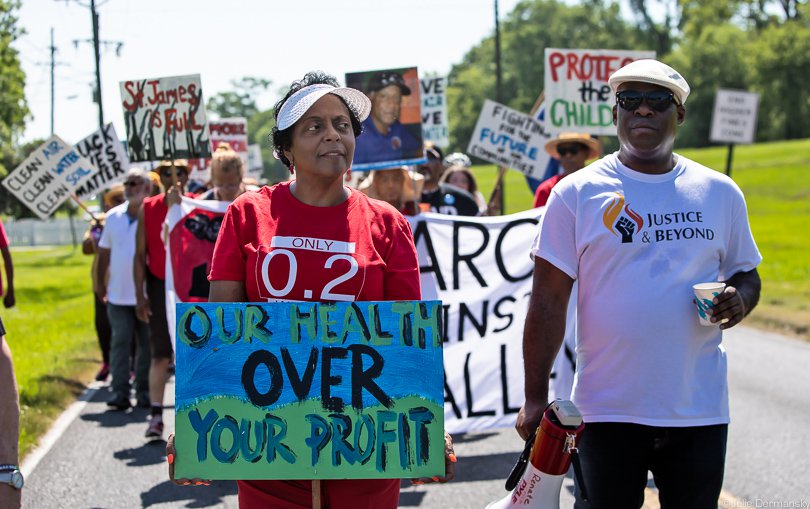 Sharon Lavigne, a St. James resident and director of RISE St. James with Rev. Gregory Manning, with Justice and Beyond.

Sharon Lavigne, another community leader of the march and founder of RISE St. James, was pleased by the turnout for the march’s first day. She feels certain that CADA’s message will reach the Governor and LDEQ Secretary and says she hopes that they will do the right thing and put people above industry.

While also satisfied with the march’s turnout, Taylor said he has lost faith in government at every level, which is why he felt compelled to help lead the march. “I hope industry is getting our message. We are going to continue to drive it home: Stop the killing,” Taylor said.

The number of people willing to march for hours in over 90-degree temperatures is a sign that Taylor isn’t alone in his frustration with federal, state, and local governments’ lack of progress in addressing air pollution and the climate crisis.

Though Louisiana is on the front lines of the climate crisis, with rising sea levels and rapid land loss caused in part by warming global temperatures, there doesn’t seem to be a new fossil fuel project that Governor Edwards doesn’t embrace.

At the industry-sponsored Oil and Natural Gas Industry Day, Edwards celebrated the state’s more than 12 liquefied natural gas (LNG) projects in various stages of progress, which are all export facilities poised to take advantage of the U.S. natural gas glut and “new markets around the world.” This is same natural gas that Louisiana politicians continue to insist is a “bridge fuel” to a renewable-powered future, despite scientific information to the contrary. In addition, by-products of natural gas drilling will be used to make plastics in several new plants in Cancer Alley, that is, if CADA can’t stop their construction.

The governor also welcomed the recently completed and controversial Bayou Bridge pipeline and several foreign petrochemical projects proposed for St. James Parish, despite the growing opposition. There is little or no mention from politicians in Louisiana about how these developments will contribute to climate change, in part because in Louisiana, politicians frequently deny climate science and ignore federal scientists’ warnings that impacts to the Gulf of Mexico region, including worsening floods and heat waves, will intensify as greenhouse gases continue warming the globe. 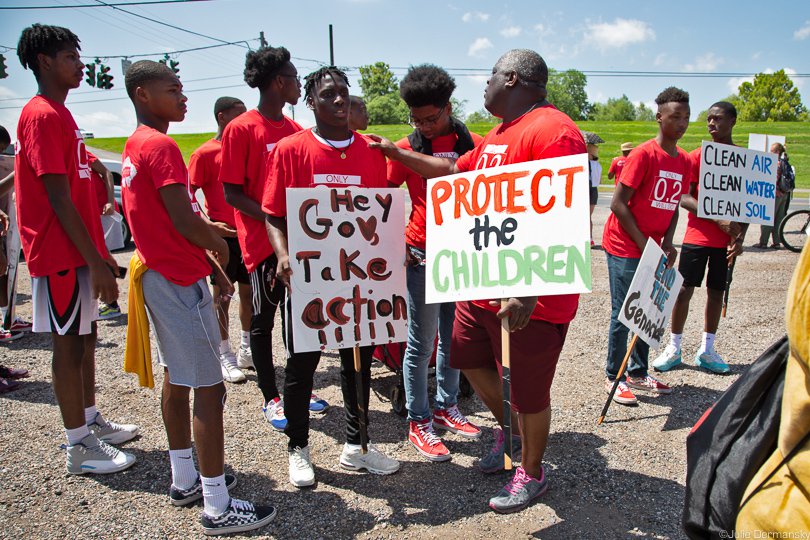 Marchers at the end of the first leg of a five day march.

CADA members and supporters on bus after wrapping up the first day’s march.