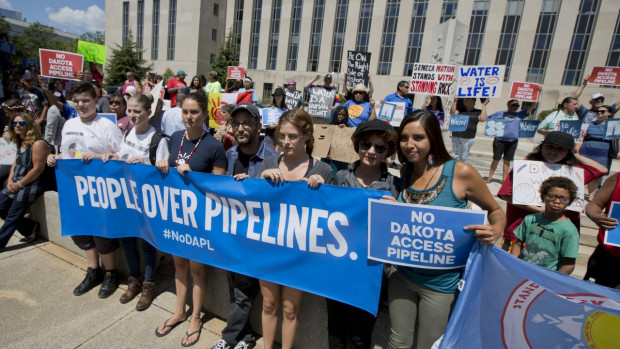 Above Photo: THE ELECTRIC UTILITY INDUSTRY IS JOINING EFFORTS BY THE OIL AND GAS INDUSTRY TO COUNTER CAMPAIGNS AGAINST PIPELINES AND FRACKING. CREDIT: AP PHOTO/MANUEL BALCE CENETA

Industry is intensifying its campaign against landowners and environmentalists.

The electric utility sector’s top lobbying group is teaming up with fossil fuel trade associations as part of an effort to intensify the industry’s campaign against citizen and environmental groups opposed to fracking and new natural gas pipelines.

A senior official at the Edison Electric Institute (EEI) said at a recent conference in Pittsburgh that her trade group has grown “very aware of the ‘Keep It in the Ground’ movement” as its member companies have become more reliant on natural gas. These activists are opposed to the extraction of all fossil fuels, not just coal, said Karen Obenshain, senior director of fuels, technology, and commercial policy, according to Matt Kasper, research director at the Energy and Policy Institute, who attended the conference. (Kasper worked at the Center for American Progress from 2012-2014. ThinkProgress is an editorially independent project of CAP.)

From Keystone XL to Dakota Access to ongoing efforts to curtail oil and gas drilling, anti-fossil fuel activists caught the attention of energy companies and their representatives in Washington years ago. Aside from only a small number of victories, however, the activists have largely been unable to stop pipelines or slow down fracking. And yet the gas industry isn’t taking any chances; it wants to ensure its winning percentage remains strong.

EEI brings to the table a budget of $90 million and a strong lobbying network in Washington and state capitals that can be used to help squelch fossil fuel resistance. The trade group plans to join the American Petroleum Institute, the American Gas Association, and the Interstate Natural Gas Association of America to advocate for natural gas, Obenshain said at Platts’ Coal Marketing Days conference in late September, according to Kasper.

EEI and the fossil fuel industry groups, Obenshain said, are in the “early stages” of putting together a campaign to counter opposition to fracking and pipelines. “We’re looking at what advocacy platforms we have out there — that the [natural gas] trades have already — to use and push back against the opposition,” she said, according to Kasper.

Natural gas groups have been running advocacy campaigns and paying for television advertisements to promote fracking for almost a decade. EEI has experience fighting citizen-driven movements — for instance, the lobbying group’s efforts to stymie rooftop solar — that it can bring to the industry partnership. EEI did not respond to ThinkProgress’ multiple requests for comment regarding the new effort described by Obenshain.

The group wants to create grassroots opposition to anti-pipeline movements.

Altogether, EEI and the three natural gas trade groups received about $350 million in revenue from their members in 2015, according to the Energy and Policy Institute, a utility watchdog organization. The industry groups have used these membership funds to pay for advertising campaigns or new organizations, with the aim of reaching the general public and policymakers at the state and local levels.

The American Gas Association (AGA), a trade group representing more than 200 natural gas utility companies, established a group called Your Energy, designed to create the appearance of grassroots support for natural gas projects. Your Energy has formed state-level groups aimed at targeting anti-pipeline and anti-fossil fuel movements in states along the Eastern Seaboard.

During President Barack Obama’s first term, the American Petroleum Institute (API) held “Energy Citizens” rallies against climate change legislation in Congress. The powerful oil and gas lobbying group partnered with the U.S. Chamber of Commerce and the National Association of Manufacturers to stage a coordinated — and ultimately successful — attack on the legislation.

In 2012, API sought to make its “Vote 4 Energy” campaign appear big by buying billboards and advertisements in the run-up to the presidential election. Last year, DeSmog reported that a front group for the pipeline industry — the Midwest Alliance for Infrastructure Now — may have created fake Twitter profiles to convey a pro-Dakota Access Pipeline message over social media.

Earlier this year, API launched a campaign, called Power Past Impossible, that seeks to show how dependent modern life is on the byproducts of oil and natural gas. API President Jack Gerard stressed the importance of speaking directly to consumers on the “awareness” of the role of oil and gas, the Hill reported.

Lorne Stockman, a senior research analyst at Oil Change International, an anti-fossil fuel research and advocacy group, sees EEI’s decision to link with the oil and gas trade groups as an effort to “offload their risks and their costs onto the consumer.”

Electric utilities operate in monopoly markets that allow them to pass their expenses — whether it’s the cost of natural gas-fired plants or natural gas pipelines — onto their customers. “This is the issue that everyday consumers, whether they are concerned about the environment or not, need to think about: Do I want to be paying for this infrastructure on my utility bill?” Stockman said in an interview. “They are teaming up in this misinformation campaign because they are worried about people starting to grow aware about the cost of this infrastructure being passed onto them through their bills.”

“Do I want to be paying for this infrastructure on my utility bill?”

With new technologies and distributed generation bringing competition to the utility industry, electric utilities have been trying to improve their public image. Executives from many of the country’s largest electric utilities met at an EEI board meeting in early 2016 where it was revealed that the trade group had hired a communications consultant who would help utilities promote themselves in a way that would appeal to more consumers, HuffPost’s Kate Sheppard reported. The consultant suggested moving away from language such as “utility-scale solar” to something friendlier, like “community solar,” according to the article.

At the board meeting, an EEI official praised the efforts of companies outside the utility industry to relate to customers. He pointed to an ExxonMobil ad showing Americans turning on light switches, Sheppard reported.

EEI also has hired Edelman, a leading public relations firm, to supplement its in-house public relations activities. Edelman demonstrated an “ambivalent stance” on representing companies that deny climate change, the Energy and Policy Institute said in a report. Edelman also advised TransCanada Corp. to run a “perpetual campaign” to build the Energy East Pipeline, an alternative project to the Keystone XL pipeline. Last month, TransCanada announced it would not be proceeding with the Energy East Pipeline project.

“Electric utilities that have talked about their strategies of decarbonizing the grid can’t then privately work with Exxon and TransCanada to combine advocacy tactics — likely astroturf campaigns — in order to build out oil and gas infrastructure,” Kasper told ThinkProgress. “These investments over the next few years will determine how fast our country will be able to decarbonize the electricity sector.”

Just last week, the Consumer Energy Alliance (CEA), which calls itself “the voice of the energy consumer,” launched a 12-state initiative called “Campaign for America’s Energy.” The campaign’s stated goal is to counter the message of anti-fracking and anti-pipeline activists.

The Energy and Policy Institute describes CEA as a “fossil fuel-funded” advocacy group run out of the offices of the public relations firm HBW Resources. EEI and AGA, as well as individual electric utilities and oil and gas companies, are members of CEA.

Some of EEI’s biggest members — Dominion Energy, Duke Energy, Southern Company, and DTE Energy — are heavily invested in the natural gas industry. Dominion is a major pipeline operator and is the nation’s largest owner of underground natural gas storage. In 2016, Dominion completed its acquisition of Questar Corp., an owner of a major interstate gas pipeline network in the western United States and parent of a large natural gas utility company that serves customers in Utah, Wyoming, and Idaho.

The natural gas pipeline would cut across several waterways.

Dominion, along with Duke Energy and Southern Company, are developing the controversial Atlantic Coast Pipeline, which is designed to deliver natural gas from West Virginia to Virginia and North Carolina. Duke Energy subsidiaries have reserved more than 59 percent of the total capacity on the pipeline, while a Dominion subsidiary has booked 20 percent and a subsidiary of Southern Company has booked a further 10.3 percent, according to a new report from Oil Change International.

DTE Energy owns a 50-percent stake in the Nexus pipeline, a $2 billion system that would transport natural gas from Ohio to Ontario. The company’s primary subsidiary is DTE Electric, the largest electric utility in Michigan. Owning the largest electric utility in Michigan can produce healthy dividends for a company’s shareholders. But owning a major stake in a natural gas pipeline can guarantee even bigger earnings for the company. The Nexus pipeline, if completed, would come under the jurisdiction of the Federal Energy Regulatory Commission, likely assuring DTE Energy a hefty 14 percent rate of return on its investment.

“That relationship has broken down in the last decade. We’re not such an energy intense economy anymore.”

For electric utilities, technological advancements and energy efficiency measures are disrupting the traditional utility model, said Stockman, who noted electricity demand has remained flat or declined since 2010. “If you look at energy demand against GDP, you’ll see a pretty strong correlation where in times of economic growth, the demand for electricity has gone up and in times of recession, it’s gone down roughly in lockstep,” Stockman said. “That relationship has broken down in the last decade. We’re not such an energy intense economy anymore.”

Utilities have seen the “writing on the wall” for a while, Stockman said. “They’ve noticed the trend. They’re not seeing load growth in their operating regions. And they’re looking for new ways to grow,” he said.

That’s why electric utilities are investing in public campaigns to protect the future profitability of their new investments. They see an opposition that isn’t backing off, even with a new president who wants to expedite the approval and construction of natural gas infrastructure.

EEI and the natural gas trade groups have “a lot of resources to push back against climate activists, consumer groups, and landowners,” Kasper said. “And it doesn’t take that long to see what companies overlap in these trade groups: DTE Energy, Dominion, Southern Company,” he added.