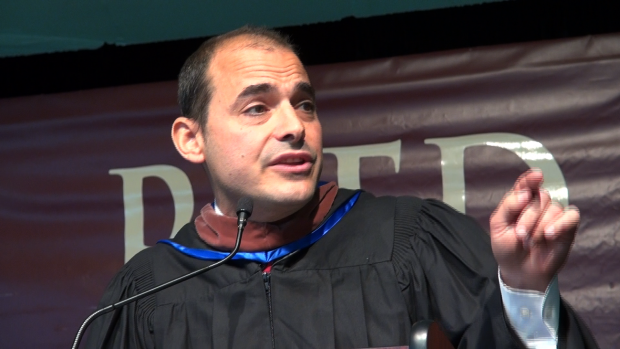 May 20, 2014 – Portland, Oregon. Graduating Reed College students and their parents gave a standing ovation Monday to an announcement by their commencement speaker that the college had decided to divest from fossil fuels.

But the President and Chair of the Board of Trustees, who were sitting onstage with the speaker, quietly wrung their hands—because the announcement was a hoax, and the board had recently decided exactly the opposite.

The college probably should have seen it coming. The commencement speaker was Igor Vamos, also known as Mike Bonanno of the Yes Men, an activist organization known for impersonating corporation officials and making fake announcements about socially responsible action. During Bonanno’s congratulatory speech to the class of 2014, he highlighted climate change as the defining issue of our time, encouraging graduates to de-normalize the status quo.

“The planet is in your hands, and if we’re going to save it we need everyone to do everything that they can. This is a revolution,” said Bonanno.

Bonanno then went on to leak the false news: “Over a delicious scone and cup of coffee with President Kroger, I was very, very pleased to learn that the board of trustees of Reed College has just now decided to divest the school’s $500 million endowment from fossil fuels.” The crowd of students, faculty, and parents cheered wildly.

“I was amused that they didn’t immediately correct the announcement. It must have seemed daunting to tell the truth after all those parents and graduates cheered for divestment,” said Bonanno.

Immediately following the announcement, Reed students and family in attendance at the commencement tweeted and spread the news through the hashtag #divestreed. The news was published on a mock Reed website. Local and national news sources, including the Portland Tribune, published the news as real.

Reed’s public relations quickly responded to the false release with their own version of the events, but not before the Yes Men sent yet another press release, also feigning to be from the Reed administration, and explaining why divestment is still not a reality: “Reed College maintains the same position on investing it has held since it refused to divest from apartheid South Africa. Then, as now, the mission of the College requires that providing a high quality education should be prioritized above questions of a social or moral nature,” read a quote falsely attributed to Reed President John Kroger.

The Yes Men launched this action following a long student-run campaign that has demanded divestment from the 200 dirtiest fossil fuel companies. Reed has a $500 million endowment, tens of millions of which are invested in fossil fuels corporations. The Reed Board of Trustees and President Kroger listened ceremonially to students’ demands at several meetings, but have not made a single commitment to change the school’s investment strategies. The administration has relied on arguments about political neutrality and academic freedom to dismiss divestment.

“It’s important to remember that there’s nothing sustainable about investing millions of dollars in fossil fuel extraction,” said Austin Weisgrau, a current Reed student and member of Fossil Free Reed. “It’s profit over ethics. Colleges like Reed issue a constant stream of greenwashed branding, and it’s the civic responsibility of the student to set the record straight.”

More
The full commencement address given on May 19th can be read here along with a video of the event.