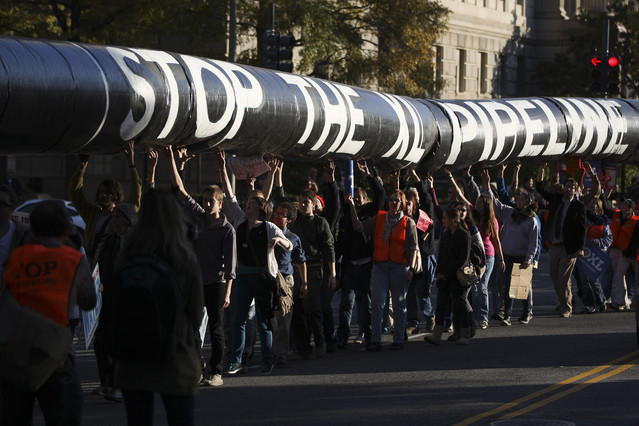 Enviros Warn Dems: Base Will Sit Out Election

Note: Too many people and organizations in the environmental movement have allied with the Democratic Party. This results in two things (1) environmentalists are taken for granted by the Democratic Party; and (2) the environmental agenda is not moving. If the Democrats had to work for the millions of votes from people concerned about the environment, we would see a lot more effort in Congress to push the agenda forward.  The vast majority of Americans agree that climate change is man-made and something that must be dealt with by government.  If Democrats were forced to work for what super majorities of Americans wanted it would shrink the opposition because Republicans also do not want to act against the views of most Americans.  We would see the political culture change on Capitol Hill; and we would see an expansion of what is politically possible.  But, if the environmental vote is taken for granted we get what we are seeing — virtually no progress.

If President Obama decides to approve the Keystone pipeline, the Democrats need to feel it in the mid-term elections.  If President Obama fails to make a decision on the Keystone pipeline it should be taken as a bad sign.  We must assume he did not want to upset voters in the Democratic Party base.  Activists should be insisting on a decision before November and warning ‘no vote for Dems’ if either Obama approves the pipeline or does not make a decision.  The decision is obvious.  Even the biased State Department report showed the pipeline will have adverse impacts on climate change adding up to 27.4 million metric tons of carbon dioxide to the atmosphere every year.  There is no reason for delay. KZ

Environmental groups are warning President Obama that his liberal base might stay home on Election Day if he approves the Keystone XL  oil pipeline.

Proponents of the $5.4 billion Canada-to-Texas pipeline say their case is buoyed by the State Department’s environmental analysis of the project, which was released to great fanfare last week.

But critics say approval of the project could sow liberal discontent and hurt Democratic chances in 2014 — including a host of contests that will likely decide who controls the Senate during the final years of the Obama White House.“It is very likely that there will be negative consequences for Democrats if Keystone were approved,” said Kate Colarulli, the associate director for the Sierra Club’s Beyond Oil campaign. “This is a tremendous opportunity to protect the climate and build the Democratic base if Obama rejects Keystone XL.”

Green groups are promising acts of “civil disobedience,” if Obama signs off on the project and contend Keystone’s approval could torpedo the president’s broader climate change agenda.

The White House insists the electoral ramifications wouldn’t play a part in the president’s final call on the pipeline, which would carry crude from Alberta oil sands to Gulf Coast refineries.

“He’s been very clear that he’s going to insulate this process from politics,” White House chief of staff Denis McDonough said Sunday on “Meet the Press.”

The issue, however, is irreversibly entangled in politics, with Republicans and some Democrats pressing for the pipeline’s approval and environmentalists waging war to stop it.

Jamie Henn of the green group 350.org called the dispute over Keystone “the most iconic fight of a generation” and said the youth vote, which played an important part in Obama’s rise, could hang in the balance.

“A Keystone XL approval will turn a lot of people off from the process, and they will get involved in action that could be disruptive,” Henn said.

More than 75,000 activists have threatened to engage in acts of civil disobedience if Obama or Secretary of State John Kerry gives Keystone XL the green light, Colarulli said.

Sign-carrying activists opposed to the pipeline have been a fixture at speeches and campaign events featuring the president. A dramatic increase in protests could muddle the party’s message, said Daniel J. Weiss, director of climate strategy at the Center for American Progress.

“If he approves the pipeline, the number of people protesting Keystone outside the Beltway could increase by a hundredfold or more,” he said.

A final decision on the pipeline is likely months off. Now that the environmental analysis is finished, a 90-day interagency review weighing the national interest of the project begins. Simultaneously, the State Department will open up the public comment period for 30 days.

That means everything should wrap up by June — just as the election season reaches a fever pitch.

The Keystone issue is certain to play heavily in a host of contested Senate races, as Republicans attempt to wrest control of the chamber from Democrats.

And while a “yes” to the project by Obama would likely help vulnerable Democratic Sens. Mark Begich (Alaska), Mary Landrieu (La.) and Mark Pryor (Ark.) in their reelection bids, it could hurt Democrats’ chances of holding onto the Senate and keeping seats in the House, activists say.

Democratic candidates running for Senate seats in red-leaning states West Virginia, Montana and South Dakota will have to woo Republican voters, and that means walking a fine line on the Keystone issue.

“They need votes on all sides of the issue,” said Nathan Gonzales, deputy editor of The Rothenberg Political Report.

At the same time, some candidates clearly view Keystone as an opportunity to draw a distinction between themselves and Obama in GOP country.

“There are more than a handful of Democrats running in red states looking to declare their independence from the president and the national Democratic Party,” Gonzales said.

The State Department’s environmental analysis highlights multiple factors at play that could influence agency heads and Kerry on whether the project serves the nation’s interests.

The report notes that a steep drop in oil prices and “long-term constraints on any new pipeline capacity,” which could result in higher transportation costs of the crude oil, could significantly affect oil sands production.

On the other hand, the report states Keystone XL would transport 830,000 barrels of oil each day, adding an extra 1.3 million to 27.4 million metric tons of carbon dioxide to the atmosphere every year.

While the report doesn’t make the claim that Keystone would drastically “exacerbate emissions,” it does state the crude oil would make it to market either way, and as a result, Obama will have to determine if that oil will be burned even if he denies the project.

An Obama approval of the pipeline could undermine the president’s larger efforts to counter the effects of global warming through regulatory action, multiple observers said.

Some have suggested Obama announce he is approving the project in concert with other actions to curb greenhouse gas emissions from power plants.

The Environmental Protection Agency  is due to propose new standards for existing plants in June, about the same time a decision on Keystone is expected.

That strategy could help blunt the political pain from approving the pipeline, but it would do little to build support for the EPA regulations among major industry and environmental players in Washington, Weiss said.

“Approval of the pipeline could distract some allies on climate pollution reductions without gaining the support from any of the opponents of the power plant rule,” he said.

Elijah Zarlin, a senior campaign manager with activist group CREDO, said Keystone has become a litmus test for Obama in the eyes of environmentalists.

Zarlin said rejecting Keystone is the best chance Obama has at succeeding with his climate regulations, including the proposed limits on carbon emissions from coal-fired power plants.

“The best chance of getting these regulations done is by energizing the base,” Zarlin said. “We have seen when the base is energized that it helps the president. But the question is:  Do we want it more than he does?”