Above Photo: A new EPA study found that in all but four states, non-whites face higher exposure than whites to PM 2.5, much of which comes from the burning of fossil fuels. Credit: Mark Wilson/Getty Images

Black Americans are subjected to higher levels of air pollution than white Americans regardless of their wealth, researchers with the U.S. Environmental Protection Agency conclude.

Researchers at the EPA’s National Center for Environmental Assessment looked at facilities emitting air pollution, as well as at the racial and economic profiles of surrounding communities.

They found that black Americans were exposed to significantly more of the small pollution particles known as PM 2.5, which have been associated with lung disease, heart disease, and premature death. Most such sooty pollution comes from burning fossil fuels. 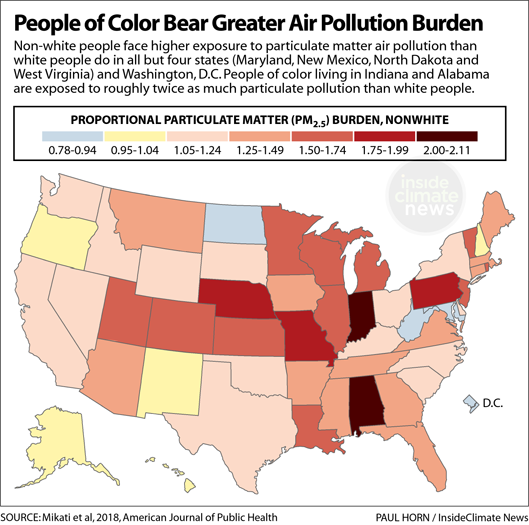 “The new study from EPA researchers confirms that race, not poverty, is the strongest predictor of exposure to health-threatening particulate matter, especially for African Americans,” said Robert Bullard, a professor of urban planning and environmental policy and administration of justice at Texas Southern University, who was not involved in the research.

More Evidence of the Need for Regulations

Bullard said the research is the latest in a “long list” of studies that show people of color, as well as poor communities, bear the brunt of the nation’s pollution problem.

“This study points to the need for equal protection and equal enforcement—rather than fewer regulations and dismantling of environmental laws,” Bullard said.

The study found that non-whites face higher exposure to particulate pollution than whites in all but four states and Washington, D.C. People of color living in Indiana and Alabama are exposed to roughly twice as much PM 2.5 pollution as white people.

The findings come on the heels of a 2017 study by the National Association for the Advancement of Colored People and the Clean Air Task Force that found low-income, black Americans are disproportionately exposed to toxic air pollution from the fossil fuel industry.

Pollution in the Neighborhood: ‘This Is My Life’

“This is personal to me,” Holloman, co-chair of the scientific and technical advisory committee of the Southeast CARE Coalition, said. “This is my life.”

Holloman said she sees a similar relationship between emissions and race within Norfolk as that detailed nationwide in the recent study. “We have [industrial] facilities throughout the city of Newport News, but when we look at facilities that have the highest air toxic emissions, they are located in the poorest, least diverse area of the city.”

The study’s findings reaffirm what many people in communities like southeast Newport News already knew, and they highlight the need for change, Holloman said.

“How do we move from these studies to actually seeing improvements?” she said.