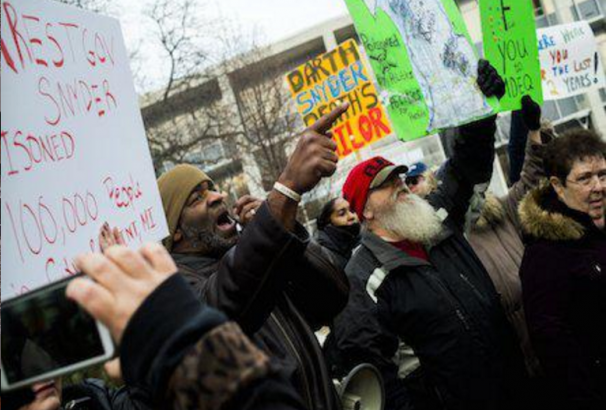 Above Photo: From BlackAgendaReport.com.

“Flint, like New Orleans, has become a target of disaster capitalism.”

Flint, Michigan, was declared a “sacrifice zone” because its majority Black and poor population’s “presence is no longer required and their lives are considered a hindrance to economic progress,” writes the author, who blew the whistle on EPA complicity in U.S. corporate poisoning of South African vanadium mine workers.  The EPA is a serial criminal that has “utterly failed the Flint community and must be held accountable.”

The first Congressional Hearing on the poisoning of predominately African-American and working class Flint, Michigan, residents took place Wednesday, February 3rd sponsored by the House Committee on Oversight and Government Reform. Hundreds of poisoned Flint citizens braved the over 10 hour bus ride from Flint to Washington, DC, to hold bottles of contaminated water in front of Members of Congress and the international media.

As I looked into the faces of the latest domestic poisoning victims it reminded me of my EPA whistleblowing testimony before Congress 16 years ago regarding the poisoning and deaths of South African vanadium mine workers by a US multinational corporation. I had hoped, as these victims do, that Congress would act and stop the killing. I fought back my flashbacks when I saw the distressed look in eyes desperately pleading for Congress to hold EPA and Michigan officials to account. Despite the congressional outrage and eloquent pontification for criminal prosecution – the reality is, to date not one official has been charged with a crime.

The reality is that Flint, like New Orleans, has become a target of disaster capitalism. The community in Flint, descendants of Africans who escaped from state sponsored violence in the South at the turn of the century, migrated to the North to take advantage of jobs in the auto industry. However, industry in Flint has collapsed and now they live in a sacrifice zone. Their presence is no longer required and their lives are considered a hindrance to economic progress.

“I saw the distressed look in eyes desperately pleading for Congress to hold EPA and Michigan officials to account.”

The lesson that we fail to comprehend from one generation to the next is that power does not reside in the halls of Congress, it resides with the people. We the people determine the course of history.

The government knows that lead is a potent, irreversible neurotoxin – especially in children. That it chose to ignore scientific evidence and straight up lie to the victims with reassurances that their water was safe is a crime against humanity. Yet it comes as no surprise to those familiar with the EPA’s history of ignoring the public health of communities of color and retaliating against EPA whistleblowers who attempt to expose this negligence.

Nevertheless, the Flint community has sent strong messages to Congress: they are not prepared to remain silent in the face of extreme levels of neurotoxic lead in the brains of their children nor their own exposure to potentially fatal water borne toxins.

For 6 months, the government deliberately and willfully allowed the poisoning of this community in the same way it conducted medical experimentation in Tuskegee, Alabama,

mustard gas exposure to Black servicemen during WWII and used the Katrina disaster to implement ethnic cleaning in New Orleans.

“The EPA downplayed the report and initiated the retaliation and intimidation playbook used against its whistleblowers.”

It was left to individuals from outside the government and one courageous EPA whistleblower to step forward and expose what Virginia Tech’s Dr. Marc Edwards called “a cover-up” during his congressional testimony. The other heroes in this story are Dr. Mona Hanna-Attisha, a pediatrician who spoke out on behalf of the children she treats and EPA whistleblower Miguel Del Toral.

A Detroit News article reveals that “EPA water expert, Miguel Del Toral, identified potential contamination problems with Flint’s drinking water last February and confirmed the suspicions in April. He authored an internal memo about the problem in June, according to documents obtained by [Marc Edwards from] Virginia Tech.” The EPA downplayed the report and initiated the retaliation and intimidation playbook used against its whistleblowers.  The Agency then proceeded to discredit and demean the significance of the Del Toral investigation.  Del Toral, according to officials, was unable to participate in the Hearing due to other obligations.

There was a time in the US when Congress asked: what did they know and when did they know it? Absent looking all the facts in the eye, the resolve to act upon them – to prosecute all those involved – was not evident during this hearing.

The public must demand to know: What did US Environmental Protection Administrator Gina McCarthy know, and when did she know it?  EPA traffic between the former Region 5 Administrator and McCarthy must be subpoenaed. Governmental Affairs Chairman Jason Chaffetz has authorized the US Marshals to “hunt him down” – referring to Flint’s Emergency Manager Darnell Earley – and “serve him that subpoena.” EPA Administrator McCarthy also needs to be subpoenaed.

“What did US Environmental Protection Administrator Gina McCarthy know, and when did she know it?”

To those unfamiliar with federal oversight, it is reasonable that they would focus on the contempt shown by Michigan officials to the city of Flint. Those officials, such as the government and former head of the Michigan Department of Environmental Quality, must be charged and prosecuted. However, EPA’s mission is: “is to protect human health and the environment.” The Agency is charged with the responsibility to ensure that regardless of the failings of state governments that citizens are “protected” from “significant risks to human health and the environment where they live, learn and work;” and “all parts of society – communities, individuals, businesses, and state, local and tribal governments – have access to accurate information sufficient to effectively participate in managing human health and environmental risks.”

EPA utterly failed the Flint community and must be held accountable. When the state of Michigan failed the people of Flint, EPA was required to step in and order the State to cease and desist in poisoning, injuring and in some cases killing its citizens under the criminalprovisions of the Clean Water Act. Yet the EPA, mandated as the public’s last line of defense, failed the people. Yet again.

What message does the relative silence of the Black community send to the government that a majority black city can be poisoned without massive demonstrations and outrage spilling in the streets?  Our collective silence in the face of such atrocities as Flint is an invitation for a hostile government to escalate their fatal policies.

As my colleague Glen Ford has warned:

“The events of Katrina told us where this leads: mass Black expulsion, to…where? Hitler’s original program for the Jews was expulsion from a German-dominated Europe. We know where that led. Which is why it is so urgent that the Black political conversation be centered on ethnic cleansing, the highest and most dangerous stage of contemporary U.S. environmental racism: the creation of an environment in which Blacks have been made to disappear.”

Dr. Marsha Coleman-Adebayo is the author of the Pulitzer Prize nominated: No FEAR: A Whistleblowers Triumph over Corruption and Retaliation at the EPA. She worked at the EPA for 18 years and blew the whistle on a US multinational corporation that endangered South African vanadium mine workers. Marsha’s successful lawsuit led to the introduction and passage of the first civil rights and whistleblower law of the 21st century: the Notification of Federal Employees Anti-discrimination and Retaliation Act of 2002 (No FEAR Act). She is Director of Transparency and Accountability for the Green Shadow Cabinet, serves on the Advisory Board of ExposeFacts.com and coordinates the Hands Up Coalition, DC.