An extraordinary day, nearly a century in the making, nearly half a century since Congress passed the Equal Rights Amendment and states began the ratification process: something really big to put in the DONE! category–the state of Virginia today voted to become the 38th state to ratify the ERA.

Both legislatures had decisive votes:

House Chief Patron of the ERA bill,  Delegate Jennifer Carroll Foy, who carried the bill to completion said in her impassioned speech on the floor:

“The world is watching…your mother, your sisters, your daughters, and I want to be unequivocally clear that there is only one way to spell equality: E-R-A!”

The ERA Coalition had an immediate congratulatory statement for the legislators, and so many activists who made for this day:

The ERA Coalition is celebrating an historic victory. The Equal Rights Amendment is about to clear its final Constitutional hurdle as Virginia becomes the 38th state to ratify it, now that both the Senate and the House of Delegates have passed identical bills to be formalized in an upcoming procedural vote. As we mark the 100th anniversary of American women winning the right to vote, we can also celebrate the success of the nearly 100 year-long quest for constitutional equality.

The ERA Coalition was formed in 2014 to work for constitutional equality. Our own polling shows that 94% of Americans support the ERA – and an unprecedented 99% of millennials support it. The message is clear: it is time for women to have equal rights in the Constitution. Women will no longer be subjected to second-class citizenship in the United States.

Despite this overwhelming support, some still seek to deny women equality. We will work closely with Congress to remove any ambiguity or obstacles that opponents argue remain in the way. The Coalition will also monitor the courts to stay current with any litigation concerning the Equal Rights Amendment. We will also continue to work with the 12 remaining unratified states in an effort to secure ratification of the ERA by all fifty states.

It’s an historic day in America. Virginia, with bipartisan support, has now pushed women around the country across the finish line toward equality and freedom from discrimination on account of sex.

This has been an incredible team effort beginning with the three women who co-founded the Coalition: co-president Jessica Neuwirth, Coalition Board Chair Maria Vullo, and Treasurer Liz Young. They have worked alongside our CEO and co-President Carol Jenkins and former chair of the ERA Coalition and current Chair of our sister organization Fund for Women’s Equality Marcy Syms. Our gratitude goes out to our amazing board, our D.C. Director Bettina Hager, our legal task force, and our lead organizations and supporters. We thank you all. Today is a day to celebrate.

For more information about the Equal Rights Amendment and ERA Coalition, please visit our website.

ABOUT THE ERA COALITION: 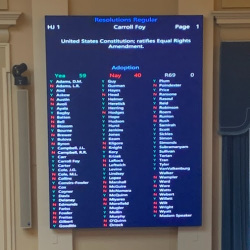 “Today, we stand on the shoulders of giants who have fought for an Equal Rights Amendment affirming women’s equality & prohibiting discrimination on the basis of sex. Virginia’s vote to be the 38th state to ratify proves there’s no expiration date on equality!”

You can read the full statement here.

WASHINGTON, DC – Congresswoman Carolyn B. Maloney (D-NY), lead House sponsor of the Equal Rights Amendment (ERA), released the following statement celebrating the votes in the Virginia House of Delegates and Senate to ratify the ERA.

“The votes today in favor of ratifying the Equal Rights Amendment in Virginia’s House of Delegates and Senate mark a huge step in the fight for women’s equality. The ratification by the 38th state required by the Constitution is the culmination of decades of work, advocacy, activism and perseverance to write women’s rights into the U.S. Constitution.

“When I look at the issues that policymakers have debated for many years, the reasons why we need the ERA become even more apparent. We are still in a stalemate over the latest Violence Against Women Act reauthorization, which must be done every 5 years. VAWA and other laws that combat discrimination against women are worth fighting for – but they are always vulnerable to attacks without the Constitutional bedrock to enforce them. A Constitutional amendment is forever. It cannot be repealed, rolled back or expire. It is not subject to the whims of who controls Congress, a statehouse, or the White House.

“As the long-time sponsor of the Equal Rights Amendment in the House of Representatives, witnessing today’s votes is truly exhilarating. I commend the leaders in Virginia for prioritizing this historic legislation, and celebrate this tremendous victory with them. In less than three years, three states have voted to ratify the ERA, rejecting arguments that the time for the ERA had passed. I am confident that more will follow. I am committed to working to ensure a vote in Congress to remove the time limit that was attached to the amendment when it passed in 1972. We will keep moving forward until the ERA is adopted into the Constitution, where it belongs.” 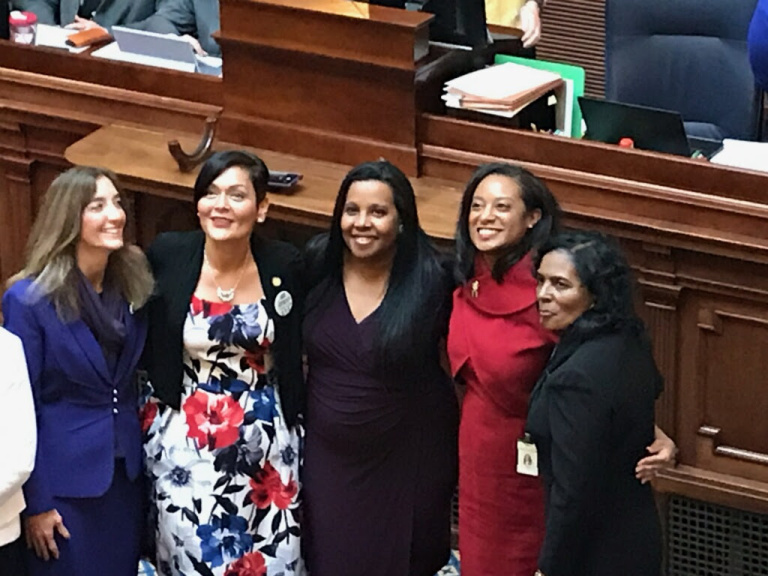 We will keep you posted on developments–and, as always, check our Lead Organization VARatifyERA.org for day-to-day developments in Virginia.

In solidarity, and onward!