Above Photo: From FAIR.org

When we went to a New York state prison to visit Ramsey Orta, the young man who filmed a police officer choking Eric Garner to death on a Staten Island sidewalk in 2014, we didn’t even make it past the metal detectors.

Last year, members of El Grito de Sunset Park, an NYC-based group that organizes patrols to film cops on the street, as Ramsey did, drove with me a few hours north to Fishkill prison, where Ramsey was being held. We called ahead to confirm visiting hours and protocols, and we brought clothes and books that had been donated to him by supporters and friends back in the city.

When we arrived at Fishkill, we put our belongings into a locker and went up to the main visitors desk to check in, where a prison official told us Ramsey wouldn’t be allowed to see any visitors at all. Why? They wouldn’t tell us. We weren’t even allowed to leave the clothes and books behind for Ramsey. Frustrated and tired, we had no choice but to drive back down to the city.

For months, Ramsey had been telling friends that the Fishkill prison guards were targeting him, much like the local Rikers Island guards—who he says tried to kill him with verifiably rat-poisoned food—had back home. He didn’t feel safe at Fishkill, either, he said. In fact, since he’d filmed his friend’s death at the hands of an NYPD detective, he hadn’t felt safe even out in public 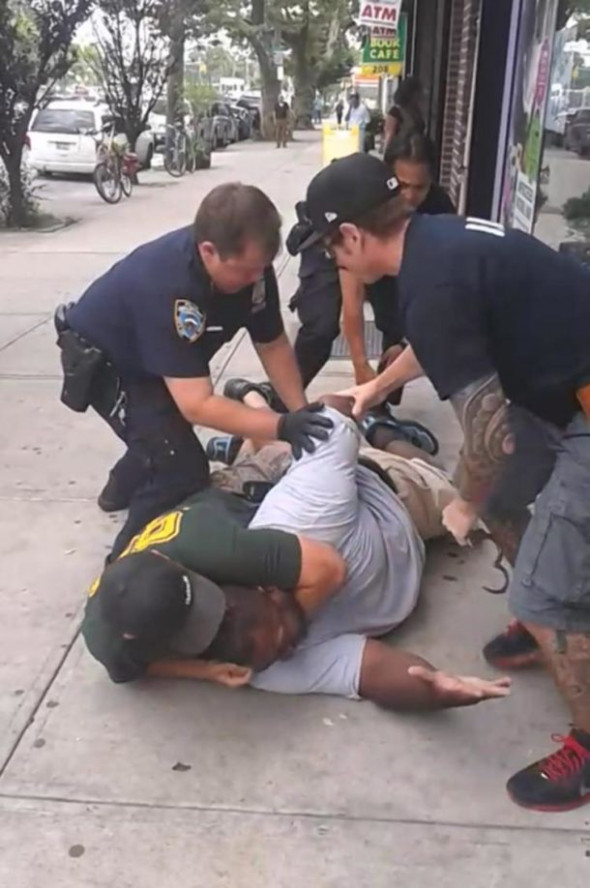 We believe the police have continuously targeted Ramsey since his video footage went viral, raiding his home and arresting him on questionable drug charges in 2015, and even arresting him in 2016 for “obstructing governmental administration” after he filmed Manhattan cops arresting a motorist. After the 2015 arrest, for which he took a plea deal that led to the four-year sentence he’s serving, an unnamed NYPD source told the New York Daily News (2/10/15), “He took the video,” alluding to the Garner video, “now we took the video,” referring to surveillance footage police claim showed Orta selling drugs.

A few months later, we decided to try again to visit Ramsey, this time at the Franklin Correctional Facility, where he’d been moved. Franklin was an almost seven-hour drive from the city, ten miles from the Canadian border. It’s not clear why Ramsey was moved so far north. His friends have suggested that he was moved as a form of punishment, meant to make it harder for people to visit him. Recently, Ramsey wrote a letter detailing abuse at the hands of prison guards at Franklin, where he has been repeatedly thrown into solitary confinement—which is recognized as a form of torture.

Of course, Ramsey’s plight is no more outrageous than any of countless people of color languishing behind prison bars. But his experience captures important truths about how targeted, politicized punishment is directed at those who dare to create media that challenge authority.

One of those truths is that punishment is connected to public attention and outrage. And when, despite the hand-wringing about media under attack from Donald Trump (Barack Obama’s role apparently forgotten), the corporate media world can ignore the arrest of independent reporters covering public protests (FAIR.org, 9/26/17), the message comes through: It’s open season on journalists not in the fold.

But the outrage withheld from the assaults on freelance or independent journalists (versus, say, mainstream reporters who are left out of a press briefing) pales in comparison to the ambivalence shown to the everyday person who picks up a camera to shine a light where few journalists would. In a world where it’s always open season on poor people of color and radical activists, Ramsey Orta’s saga suggests the most terrifying scenario for those in power might be to see those groups begin to take media into their own hands.

Ramsey’s treatment, along with that of other activists and copwatchers, may be intended as a cautionary tale for anyone who would film police. But for those devoted to the idea that journalism is a sacred institution that protects and strengthens democracy, his case points to the need to challenge the imaginary line separating journalists and the rest of us, which limits those protections.

This distinction between bona fide journalists and amateurs is one that members of the press themselves reinforce, when their outrage meter bursts at the thought of a credentialed reporter being manhandled or arrested—but not the average person.

Ramsey Orta has no formal training, no press credentials, and probably had little interest in traditional journalism before 2014. But I and others consider him not only a journalist—he created media to bring information to wider audience—but part of a wave of citizen-journalists who are drastically changing both media and political landscapes.

Ramsey is from the streets of New York, and he’s had constant contact with the criminal justice system. It’s those qualities that can make it easier to connect to people on the ground, particularly in the communities of color, where there’s often suspicion and resentment towards reporters. In fact, I’d argue that it’s precisely because they don’t fit traditional journalistic models that citizen-journalists like Ramsey  can not only be uniquely effective creating media, but also serve to inspire others who’ve historically been left out of media circles —specifically, poor people of color—so that they, instead of professional journalists, can begin to control the narratives about their communities.

The press will only be free of attacks from police, Trump or other powerful forces when its protections, and our outrage, begin to include everyday people. Journalism isn’t dead simply because billionaires like Peter Thiel or Joe Ricketts decimate the (let’s be honest, blindingly white) media that are—it’s dead when we choose to ignore the journalism and potential journalism all around us.

In 2015, Ramsey Orta was honored by the New York Press Club for his video. He is a copwatcher, filmmaker and a journalist—and, in the eyes of many, a political prisoner. Today, he is experiencing abuse and retaliation almost 400 miles from where he filmed the video seen ’round the world. A Facebook page organized by some of his friends and supporters, including watchdog groups like WeCopwatch, publishes updates on Ramsey and how to write him, or send him donations. Unfortunately, it’s one of the only places online where you’ll hear anything about Ramsey after he filmed a video that, like all great journalism, sparked a movement for change.