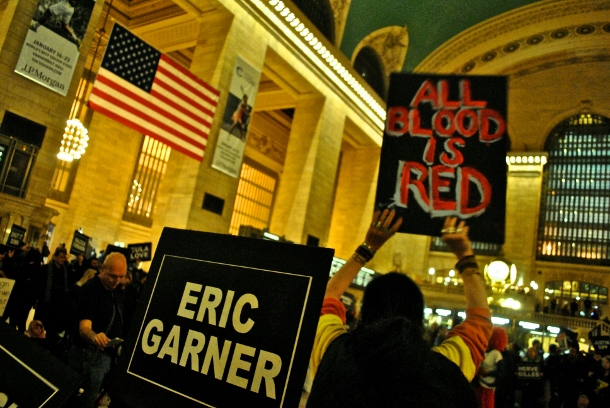 Over the last week, New Yorkers marked the one-year anniversary of Eric Garner’s chokehold death with over a dozen events and actions across the city, from banner drops, to rallies with victims of police violence from around the country, to a march with over 1,000 people leading to dozens of arrests.

The actions kicked off last Monday with a march on Staten Island organized by NYC Shut It Down (NYCSID) and led by Erica Garner, Eric’s oldest daughter and founder of the Garner Way Foundation. “It’s important to keep bringing actions to Staten Island,” Erica told ANIMAL, “because the police still haven’t reformed out there.”

The march hit many locations directly connected to Eric Garner’s story, from the courthouse where the Grand Jury failed to indict Officer Pantaleo, to the NYPD’s 120th Precinct, where Pantaleo still works, to the spot where Eric died, just seven blocks away. At each location, and while taking the streets between them, Erica led protesters in chants of, “No Justice! No Peace,” and “Pantaleo Has To Go!”

After the march, NYCSID dropped a banner reading “I Can’t Breathe” on the Staten Island ferry. This was a marked change in tactics from the past year, when protesters explicitly stated they would not demonstrate on the ferry in order to keep peace with the DOT. “After one year and still no justice, it is important to increase the pressure,” said an organizer with NYCSID who asked to remain anonymous.

During the week, the group also dropped the banner at two other iconic locations: on the balcony inside Grand Central Station, and from the High Line. At Grand Central, one MTA officer and three State Troopers stopped the group as they left, told them they weren’t allowed to do what they had just done, and needed to get a permit next time.

One year later, and there’s still much work to be done https://t.co/dMjbnfnvpT

The largest demonstration took place Friday night, with more than 1,000 participants. Dozens were arrested. The rally and march was organized by Millions March NYC, NYC Shut It Down, and the People’s Power Assembly. Before the march made it three blocks, the NYPD arrested one prominent member from each of the three groups that organized the event, prompting calls from protesters that they were targeted for their role in organizing and not engaging in activity that other protesters were not.

The first person arrested was Colin P. Ashley, an organizer with the People’s Power Assembly. He said he was using a megaphone at the rally in Columbus Circle when he was approached by Captain Riley, who asked him if he had a permit. “I put down the megaphone and it was taken away by other protesters, but Riley continued to stare at me, so I asked if I was being detained. He didn’t say yes, so I started to walk away, and he immediately arrested me.” Colin was charged with failure to have a sound permit, but was the only person arrested at the rally despite other people using amplified sound without a permit.

Arminta Jeffrys and Vienna Rye, of NYCSID and Millions March NYC, were arrested on 57th Street soon after the march left Columbus Circle. “Traffic was clear, so we marched in the street,” said Arminta. “The police yelled at us to get on the sidewalk, so we did, and then Officer McCarthy grabbed me and cuffed me without warning.” Video (above) verifies that she was arrested on the sidewalk. She was charged with disorderly conduct and obstructing vehicular traffic.

After taking these three organizers into custody, the NYPD did not arrest anyone else for three hours, even as most of the protesters took the roadway from Columbus Circle to Herald Square. In Herald Square about two dozen more people were arrested, but only after engaging in an orchestrated act of civil disobedience, locking arms and sitting in the intersection.

This also marks a shift in tactics from the past year. According to several organizers, there had not been a Black Lives Matter action organized with the intent of getting arrested in NYC since the death of Eric Garner.

Babbie Dunnington was one of the people arrested during the sit-in. This was the first time she had been arrested during a protest, but she said she thought it was important to do so. “It is important to show our resistance to the fact that after a full year, Daniel Pantaleo has not even been fired. It exposes the injustice in our system: that cops can kill people on video and not get arrested, but if we block traffic for 30 seconds, we go straight to jail.”

Babbie also noted that pushing back against police repression is important in protecting people’s right to free speech. “After thousands stopped coming out, the NYPD started pushing us onto the sidewalk. When we complied with staying on the sidewalk, they didn’t give us more respect, they disrespected us more, telling us to stay on the fucking sidewalk, and arresting us for smaller and smaller infractions…You can say things need to change, but the more you do what they tell you, the more they expand their power.”

To Babbie, the criminal justice system has not met the most basic demand of the Black Lives Matter movement. “A huge part of this movement is about police reform, but there have been many unjust police killings in the last year and very few indictments.”

The family of Eric Garner agrees. In several press conference and rallies held over the last week, often alongside the families of Michael Brown, Trayvon Martin, and Tamir Rice, they have stated that the settlement of their civil suit is not justice, that they want charges against Daniel Pantaleo and meaningful criminal justice reform.

This begins with holding police officers accountable, Erica said in an interview this week. “If the federal government would’ve done something sooner it would’ve made other officers across the nation take notice and maybe people like Walter Scott and Freddie Grey would still be alive today.”

It remains to be seen what the federal government will do, if anything, in the case of Eric Garner, or to ensure police accountability nationwide. But one year on, it seems like activists engaged in all types of actions will only amplify their calls for justice. “If they change things fast, we’ll push less,” said Babbie. “If they don’t, we’ll keep disrupting.”