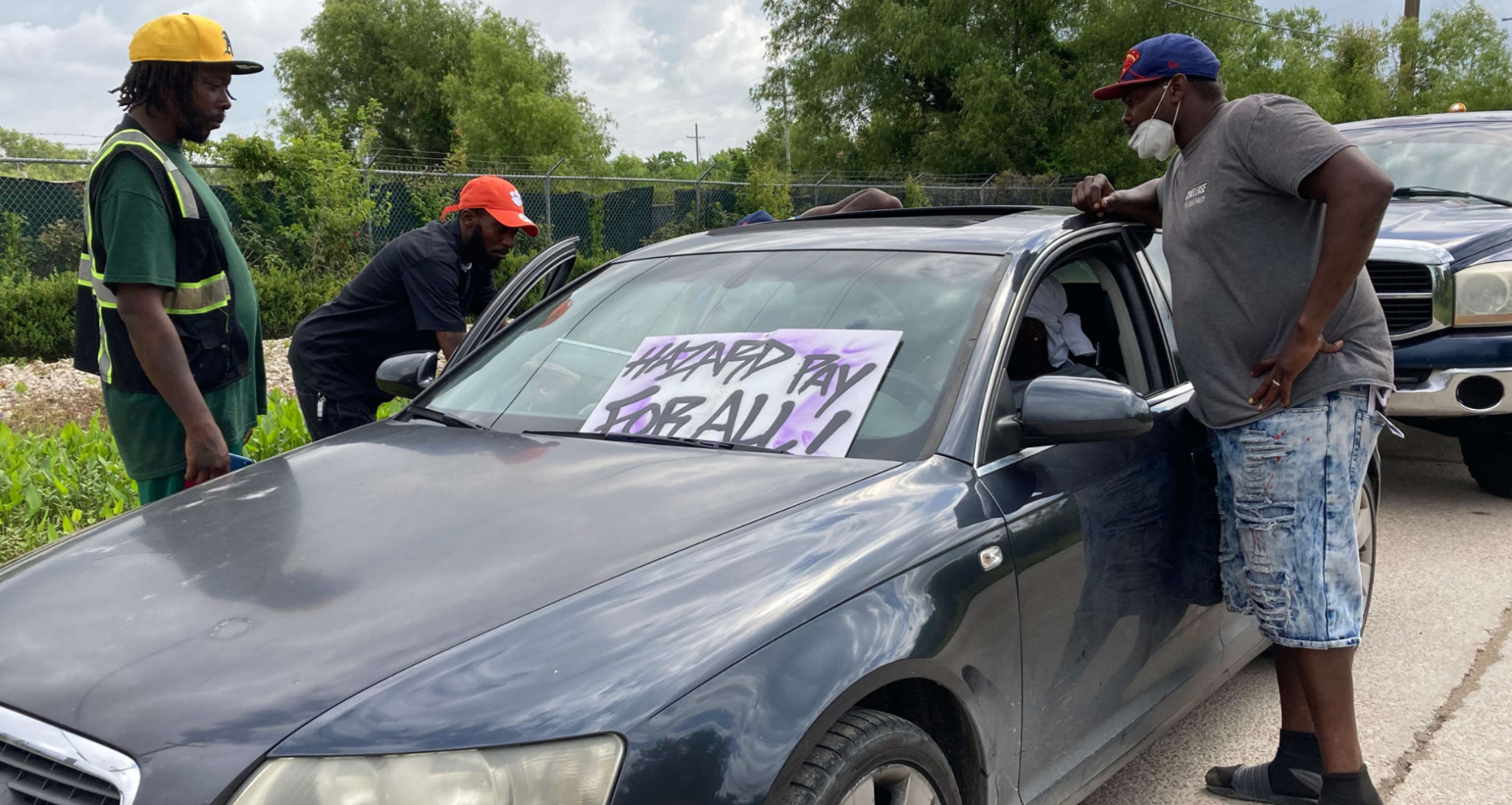 Above photo: Rahman Brooks and other striking sanitation workers gather around a car at a picket line in New Orleans. The strikers are demanding higher wages and better working conditions from a private contractor and city officials. Mike Ludwig.

The severe outbreak of COVID-19 in southern Louisiana was the last straw for a group of sanitation workers who pick up trash in eastern New Orleans. Last week, they walked off the job and went on strike, demanding hazard pay and a $15 living wage.

Without “hoppers,” as the workers are known, garbage would pile up on the streets and contribute to the spread of disease and other public health problems. However, the group of hoppers in New Orleans say their employers did not provide them with hazard pay or sufficient personal protection equipment as COVID-19 shut down the city. Technically employed by a subcontractor and working for a private disposal firm, the hoppers say were paid as little as $10.25 an hour, with no benefits such as paid sick leave, for lifting 250,000 pounds of waste per week — an essential public service.

The hoppers’ protest is a wildcat strike, meaning the hoppers went on strike without approval or support from an established union. The work stoppage entered its second week on Wednesday, highlighting the pitfalls of privatizing public services in cash-strapped cities like New Orleans, where tax revenues are now plummeting due to the COVID-19 outbreak. At one point, prisoners in a work release program were brought in to replace the strikers at extremely low wages, but the private contractor who runs the program with a local sheriff pulled out after learning about the labor dispute.

“In the early ‘90s, this service switched over from public to private, which across the board hurts workers and benefits private companies,” said a striking hopper known as “Big E” who spoke to Truthout on the picket line Thursday.

Big E pointed out that he and his fellow hoppers are all Black men. They hold signs reading “I am a man” inspired by the 1968 sanitation strike in Memphis, Tennessee, that was a pivotal moment in the civil rights movement. Big E said they have taken support from white activists and prominent politicians to get the respect and media attention they deserve. Louisiana Gov. John Bel Edwards recently launched a task force to study why Black COVID-19 patients account for a disproportionate number of the states’ deaths, but that’s no mystery for Big E. Just look at the jobs that Black workers perform.

The strikers in New Orleans are far from alone. The labor news site PayDayReport.com has identified 200 wildcat strikes across the country during the pandemic as workers refuse to risk their health by going to work. In some cases, workers protested for a few hours before bosses agreed to their demands; in other cases, workers called out sick in large numbers over longer periods of time. In Pittsburgh, sanitation workers made national headlines when they went on strike in March demanding better protective gear. Many other strikes have likely occurred without receiving media attention.

The striking hoppers work at a shop run by Metro Services, a waste disposal and construction company that operates across the South and has a $10.7 million contract with the City of New Orleans. They say their demands are reasonable: consistent access to protective gear, $150 in weekly hazard pay for working during a pandemic, and a living wage of $15 per hour. They also want Metro Services to fix its trucks, which have leaked toxic hydraulic fluid on workers and into the environment, according to hoppers and activists who support them.

“Every day we do our jobs, we put ourselves and our families in danger,” said Rahman Brooks, a striking hopper who spoke to Truthout on the picket line Thursday. “We deserve hazard pay and proper PPE for our safety and the safety of our families.”

In a statement, Metro Services said the striking hoppers are making “intentionally misleading allegations” about working conditions, and the company has a stockpile of hand sanitizer, N95 masks and protective gear. The company, one of the city’s primary trash collection contractors, said that none of its direct employees joined the strike. The striking hoppers are employed by PeopleReady, a temp agency that has largely stayed out of view since the strike starting making the evening news.

Striking Against Austerity and Privatization

Thanks to right-wing and pro-business politicians in the state capitol of Baton Rouge, the minimum wage in New Orleans is frozen at the federal minimum of $7.25 an hour. Grassroots activists have been clamoring for years to raise the wage floor in a city where rampant inequality is magnified by hurricanes and crises like the COVID-19 pandemic. In 2016, they won a victory when the city passed a “living wage” ordinance that guarantees paid sick leave for city employees and contractors and incrementally raised their minimum wage to $11.19 per hour.

However, city officials extended a number of contracts shortly before the ordinance took effect, according to Alfred Marshall, a former city employee and organizer with Stand With Dignity, a grassroots group of Black workers in New Orleans. This created a loophole allowing some contractors and subcontractors to continue paying wages below the $11.19 minimum. In an email, a spokeswoman for Metro Services said its subcontractors have assured the company that all of its workers are making $11.19 an hour as required by the city ordinance. Marshall said PeopleReady was forced to raise its wages after the strike broke out.

Layers of contractors and subcontractors are a common feature of privatized public services, making it easy for public officials and employers to point fingers when labor disputes erupt or services are interrupted. Big E said hiring hoppers through PeopleReady makes it easier for Metro Service to avoid accountability during the strike, while city officials can claim they are simply honoring a pre-existing contract, rather than enforcing their own labor standards.

“I think this is a really good example of when privatization allows the government to sidestep its accountability and pass the buck to the contractor, and the contractor takes the heat,” said Jeremy Mohler, the communications director at In the Public Interest, a group that advocates for public ownership of public services. “It’s a really good example of how, when the accountability is passed to the private sector, this public good — you can say clean streets and sanitation are public goods — is taken for granted and no longer seen as something everyone should have access to.”

The privatization of public services has been a nationwide trend for years, but Mohler said the economic crash of 2008 poured fuel on the fire. State and city budgets shrank as tax revenues dropped, and austerity-minded politicians increasingly turned to private contractors promising to save public money while providing more efficient service. It does not always work out that way, and as Truthout has reported, public spending never recovered after the Great Recession, leaving the government ill-prepared for the COVID-19 outbreak and frontline workers at risk.

Mohler said contractors save money by paying low wages and cutting corners, which can result in shoddy services and workers having less money to pump into local economies. Private contractors also funnel tax dollars toward their own overhead costs, such as advertising, executive compensation and legal expenses.

Mohler said there are also political factors driving privatization, since public workers are more likely to belong to unions than those working for private companies. Republicans know that unions representing teachers, firefighters, postal workers and other public employees are major backers of the Democratic Party, and GOP politicians continue to take bold swipes at their influence and bargaining power.

A number of cities have reversed course and “insourced” public services (that is, returned them to public hands) from water treatment to snow plowing in recent years, according to ITPI. A 2012 survey found that 53 percent of city managers cited insufficient cost savings and 51 percent cited unsatisfactory service quality as reasons for insourcing services. Across the world, public services unions are documenting hundreds of cases of “re-municipalization” as local governments bring privatized services back under public control.

“We’re still caught in this ideological framing that is really a right-wing, corporate framing — that the private sector can be more efficient and the public sector is bloated and bureaucratic,” Mohler said. “I think we are still stuck in this framing, even though we have learned some hard lessons after 2008.”

The COVID-19 pandemic threatens to bring another wave of privatization as public revenues hit rock bottom once again. Last month, 980,000 public service workers nationwide lost their jobs due to the pandemic — more than were lost in the entire Great Recession, according to AFSCME, a national union for service workers. Municipalities across the country are projected to lose hundreds of billions of dollars in revenue due to the economic fallout caused by COVID-19, according to a new Bloomberg report.

AFSCME and other unions are currently calling on Congress to provide substantial federal funding for state and city governments so essential services survive the crisis and frontline workers can have safety gear and fair wages. However, the latest stimulus package is currently held up by Republican opposition in the Senate.

“Congress must act immediately to fund the front lines so we can protect public services,” said Vincent Variale, a first responder for the New York Fire Department and AFSCME member, in a statement on Wednesday. “We need to keep EMS workers, nurses, child care providers, sanitation workers and so many others on the job, and we need to keep them healthy so that we can fight the coronavirus and reopen the economy so that we’re stronger than before.”

New Orleans began outsourcing waste collection in the 1980s, and by the 1990s, the city’s hoppers had gone from being decently paid city employees to temp workers receiving minimum wage with no benefits. In New Orleans, it’s well-known that waste collection is a lucrative business –- at least for company owners and CEOs. In the 1990s, the hoppers staged a citywide strike with help from unions, bringing garbage collection to a halt and forcing the private contractors to negotiate.

Today, the hoppers picketing Metro Services are organizing a union they call the City Waste Union. Rahman said he hopes other hoppers will join them. After all, hoppers working for other contractors are also paid low wages for grueling but essential labor that benefits every resident. For now, the City Waste Union is demanding a meeting with Metro Services to negotiate working conditions. Rahman said the bosses should be willing to “meet them in the middle.”