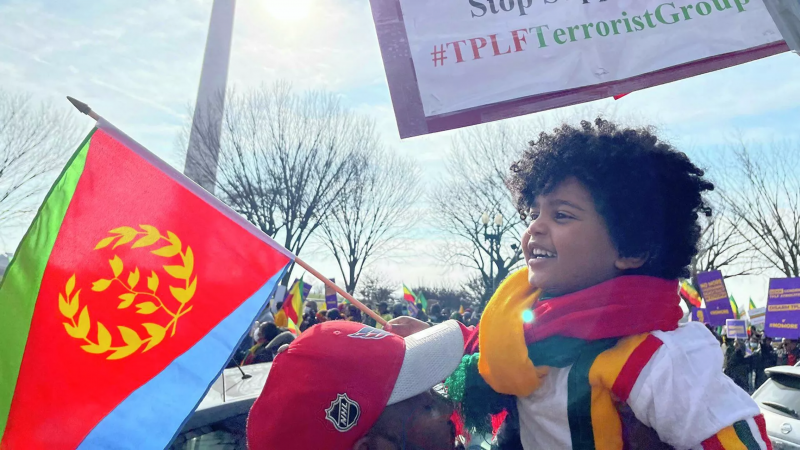 With Congress laying the groundwork for further sanctions against the government of Ethiopian Prime Minister Abiy Ahmed and the UN pulling sorely needed food aid from cities following looting by rebel forces, Ethiopians and Eritreans in the US are continuing their pressure on Washington to stop intervening in the conflict.

Washington, DC – Thousands of Ethiopians, Eritreans and their allies rallied outside the US State Department on Friday as part of the #NoMore campaign opposing US intervention in the Horn of Africa. Their protest comes as the US’ chief envoy to the Horn, Jeffrey Feltman, is visiting several countries connected to the conflict after failing to secure a ceasefire.

The crowd chanted “fake news CNN” and “no more TPLF,” referring to the Tigrayan People’s Liberation Front, a rebel group with Western support that earlier this year made a blitz on the capital from the northern Tigray state. Their offensive was blunted and reversed by the Ethiopian National Defense Force (ENDF), the military forces loyal to Prime Minister Abiy Ahmed.

Many at the rally carried signs hailing Abiy’s democratic victory in July, the country’s first-ever contested elections, and asking why the US would support the TPLF’s attempt to overthrow him. The Ethiopian parliament decreed the TPLF to be a terrorist organization in May, several months after the group launched an uprising by attacking ENDF forces in Tigray.

A most prescient question 🤔 pic.twitter.com/Hp5DO1L7Sv

Some carried signs expressing their fears that the United States will turn Ethiopia into another war-marred failed state like Afghanistan or Libya.

“We are pro-democracy. The US government intervention has to be stopped and we are asking that US intervention be stopped against a democratically-elected Ethiopian leader,” one attendee at the rally told Sputnik. “We want to stop TPLF intervention, we want to stop TPLF brutal, absolutely brutal action in Afar and Amhara regions and all we are asking for is what the US really wants for its own citizens: having the democratically-elected government in place. That’s all we’re asking.”

Their fears are not without merit: a video leaked late last month revealed numerous Western diplomats, including the present US ambassador to Somalia, Donald Yamamoto, meeting secretly with a senior TPLF official, cheering on their military success, and speaking of a potential post-Abiy “transition government” once they captured Addis Ababa.

We spoke for a few minutes about the photos. He said it’s foolish for the US to alienate 100 million ppl by supporting the tiny TPLF b/c it’s “pushing #Ethiopia towards the East.”

“We are tired of the US or the West telling us what’s good for us.” pic.twitter.com/MJcrmxRTyA

“These are African and American fighters. We are tired of the US or the West telling us what’s good for us. They fought for their rights, Ethiopia’s trying to fight for their rights also,” he told Sputnik. “The US should not be telling African countries who their leaders are.”

“It doesn’t make sense how the US wants to alienate 100 million people and choose a small group that’s terrorist, stolen billions of dollars and using that money to hire lobbyists here in the US to facilitate their agenda. It’s very misguided and it’s pushing Ethiopia towards the East. It’s not in the US’ best standard of foreign policy to allow Ethiopia to go this route,” he added.

The protesters then marched from the State Department to the US Capitol, by then numbering many thousands, in a procession that took them through the heart of the US capital city at midday.

You won’t see it on CNN but 1,000 Ethiopians & Eritreans are currently marching from the State Dept to the Capitol, demanding an end to US meddling in the region & slamming media erasure of TPLF attacks on their countries

“US HANDS OFF ETHIOPIA!”

Every weekend for more than a month, #NoMore protests have rocked the US capital city, which has the largest concentration of Ethiopians outside of Africa. Friday’s protest, however, was called because it is Congress’ last day in session and the Senate is considering the massive National Defense Authorization Act (NDAA), the bill that funds the Pentagon.

The NDAA contains a provision requiring the US State Department to “submit to the appropriate congressional committees a determination whether actions in the Tigray region of Ethiopia by the Ethiopian and Eritrean armed forces constitute genocide as defined in section 1091 of title 18, United States Code, or crimes against humanity.”

For Abiy supporters, the claims of a genoicde in Ethiopia’s northern Tigray state are overstated and part of a media campaign designed to win Western sympathy.

“On November 4 … they started to use the hashtag #TigrayGenocide,” Simon Tesfamariam, executive director of the New Africa Institute, told Sputnik last month, referring to the day in late 2020 when the TPLF first attacked ENDF forces in Tigray.

“Before you could even tally up who was dead and where the bodies were, right off the bat they were using the #TigrayGenocide hashtag. And it became a campaign, the media started to say there was a genocide going on in Tigray,” he added.

Indeed, the UN Human Rights Office and Ethiopian Human Rights Commission said in a report published last month they had found no evidence of such a genocide in Tigray, although they did document human rights abuses by all sides in the conflict.

The US has sanctioned Abiy’s government as well as its ally, Eritrea, for alleged abuses in Tigray, and an executive order issued by US President Joe Biden in September laid out a framework for justifying further sanctions on groups deemed to “threaten the peace, security, or stability of Ethiopia, or that have the purpose or effect of expanding or extending the crisis in northern Ethiopia or obstructing a ceasefire or a peace process.” It includes other reasons, too, such as “obstructing” the delivery of humanitarian assistance to Ethiopia, targeting civilians and UN or African Union officials, and the sweepingly broad “actions or policies that undermine democratic processes or institutions in Ethiopia” and “actions or policies that undermine the territorial integrity of Ethiopia.”

It’s notable that while the sanctions could theoretically be applied to the TPLF, Washington has yet to do so, despite the evidence of abuses by the group.

The counteroffensive launched after Abiy went to the front late last month has significantly pushed back the TPLF’s southern advance, returning dozens of cities and towns to government control. However, in the wake of the TPLF retreat, widespread looting, destruction, and abuses have been found, including the armed seizure of food from UN World Food Program warehouses in Kombolcha that led to the suspension of aid to the region while 4.5 million remain in near-famine conditions.

“We had to pause distributions last week due to insecurity & loss of assets, but hope to resume in the coming days,” the UN relief agency tweeted on Friday.

On Thursday, Abiy declared the counteroffensive a success and returned to Addis. Meanwhile, Feltman, having failed to convince either Abiy or the TPLF to adopt a ceasefire, has embarked on a tour of the United Arab Emirates, Turkey and Egypt, three outside nations with connections to the conflict, for what critics say is an attempt to erode international support for Abiy.

Abiy’s government declared a unilateral ceasefire in June, immediately prior to the TPLF’s offensive, but now demands the TPLF withdraw back to Tigray, cease its attacks against the ENDF, and recognize the legitimacy of Abiy’s government as its conditions for a cessation of hostilities. So far, the TPLF has rejected those terms, with spokesperson Getachew Reda claiming the recent withdrawal was by their own design and not because the ENDF forced them out.

The conflict has created a massive humanitarian crisis, with more than 70,000 people fleeing across the border into neighboring Sudan and an estimated 4 million more internally displaced, according to United Nations data. There is no reliable death toll for the conflict.