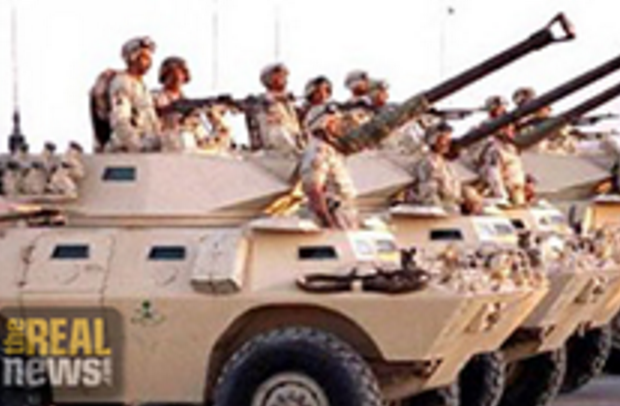 Above Photo: From Therealnews.com.

On Thursday the European parliament called on the European Union to impose an arms embargo against Saudi Arabia, saying that Britain, France, and the EU government should no longer sell weapons to a country accused of targeting civilians in Yemen. EU lawmakers voted 359 in favor, 212 against, with 31 abstentions from the formal call for an EU embargo. Although the vote is not legally binding, lawmakers hope it will pressure the European Union to act. Britain and France are the main European suppliers of arms to Saudi Arabia, with the UK providing $3 billion in sales since Saudi forces began military operations in Yemen last year. Germany also licensed exports of almost $200 million to the Saudi kingdom in the first six months of 2015. Yemen has become one of the worst humanitarian crises in the world.

Nearly 6,000 people have been killed since the coalition entered the conflict, almost half of them civilians, according to the United Nations. The UN says also that famine looms as half the population, or 14 million people, face hunger. Previous reports by Amnesty International said the Saudi-led coalition has bomb targets, including schools, the Center for the Blind, and a Medecins Sans Frontieres hospital.
Joining us now from New York to discuss all of this is William Hartung. William is a senior advisor with the Security Assistance Monitor, and the director of the Arms and Securities Project at the Center for International Policy. William, so good to have you with us.

WILLIAM HARTUNG: Yes, thanks for having me.

PERIES: So William, if this call has no legal weight, what is it attempting to do?
HARTUNG: Well, I think they’re trying to draw attention to a horrific catastrophe that’s been ignored in a lot of the major capitals of the world. And I think the fact that the vote was almost on the order of 3:1, I think that will help propel the issue, make it more visible. There is opposition among civil society groups in the U.S. and the UK and Germany to selling to the Saudis while they’re prosecuting this war in Yemen. So this will just elevate the issue to another level. I think world governments will have a harder time ignoring it.

PERIES: Right. And could it eventually lead to an embargo? And if it does, what kind of measures have to go into place for a successful embargo?

HARTUNG: I think to get through the process you would need to sway the major players. So it’s a tool in the hands of, say, the UK movement and others to move their governments in the right direction to bring this embargo about. I think what would be needed is to suspend not only future licenses, but licenses that have already been granted so that there’s not kind of a grandfathering in of sales that have already been agreed to, but that there’s an immediate cease in delivery of things like ammunition, bombs, things that are being used to carry forward the conflict.

PERIES: All right. So this is, William, one measure. However, the greatest arms sales are being sold by the United States to Saudi Arabia, and I understand also countries like Canada, in spite of the fact that they have somewhat of a progressive government who says they want peace in Yemen and in the Middle East, to continue to sell arms to the Saudis. Do you think that there needs to be a greater effort worldwide to prevent Saudis from getting these arms, that are obviously creating this huge humanitarian crisis in Yemen?

HARTUNG: Yes. I think the international community has to get together behind the notion of cutting these sales to the Saudis. And that’ll take some hard work. Even in places like Canada, as you mentioned, where the government’s hiding behind the argument that the deal was already made. But they can certainly roll it back. It doesn’t seem to comport with their own policies on arms and human rights.
In the United States there’s been a few members of Congress who have spoken out. Oxfam America has organized some efforts to raise this on the agenda. The issue of the use of cluster bombs has drawn criticism from Capitol Hill. But there’s work to be done. Any progress in Europe, I think, will spill over into the debates in the U.S. and Canada, and help campaigners here.

PERIES: And who are, who are behind, who are the major blockers of this kind of an embargo going into place?

HARTUNG: Well, I think in the case of the United States the longstanding relationship with the Saudis, which originally was based on oil politics, the promise that President Obama made to reassure them that they weren’t tilting towards Iran, despite the recent nuclear deal, and of course U.S. arms manufacturers, for whom it’s a huge bonanza. And as the Pentagon has cut back a bit on their domestic weapons buying, all the major companies are looking to places like Saudi Arabia to fill in the gap, to sell tanks, to sell fighter planes, to sell helicopters. Possibly to sell a new missile defense system, not to mention the bombs and missiles. So it’s sort of a full array of weapons in the pipeline, including an offer of combat ships at a time when they are carrying out this awful embargo. Those will take a while to get there, but even the offer is kind of almost an endorsement of the embargo.

PERIES: Right. And the crisis in Yemen, William, has sort of fallen out of media gaze, largely in light of what’s happening in Syria and the humanitarian crisis as a result of that war. Now, getting back to Yemen, what’s the depth of the problem and the crisis that the people on the ground are facing?

HARTUNG: Well, the UN has pretty much said it’s the most terrible humanitarian crisis in the world, short of what’s happening in Syria. And I think the difference is there’s a little more, a less complicated way to get at the problem, which is if you cut off arms to the Saudi coalition, much of the damage will not be able to be done. Whereas Syria is a multi-party struggle, there’s complicated negotiations. It’s important to address Syria, there’s no question about that. But I think it’s, it’s a harder place to make a difference in the short-term, whereas I think an embargo on the Saudis to keep them from attacking Yemen further would be more easy to accomplish in the short to medium term, and have an immediate positive impact on the people in Yemen.

PERIES: All right, William. We’ll be keeping an eye on this, and I thank you for joining us with such short notice.

HARTUNG: Appreciate it, thanks for having me.