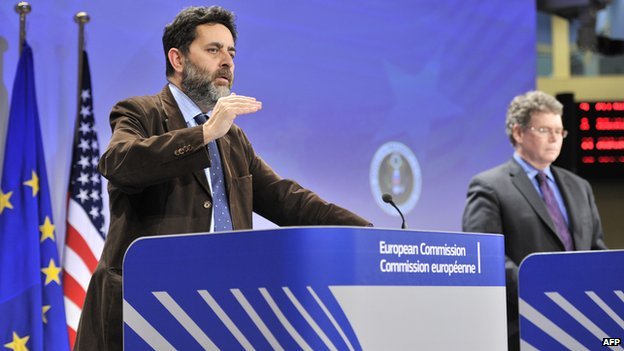 The European Commission says it will consult on part of a far-reaching EU-US free trade deal amid concern that hard-won social protections in Europe might be undermined.

The trade negotiations began last year but now the Commission has launched a three-month public consultation on the proposed investment rules for firms.

The aim is to close legal loopholes.

Consumer and environmental lobbyists say there is a risk of the EU accepting lower US standards in many areas.

The proposed EU-US Transatlantic Trade and Investment Partnership (TTIP) could bring huge benefits for Europe and America, the Commission says.

But several European non-governmental organisations (NGOs) and MEPs have questioned the investment rules, fearing that they could tie governments’ hands in the face of powerful US corporations.

Announcing the public consultation, EU Trade Commissioner Karel De Gucht said “governments must always be free to regulate so they can protect people and the environment.

“But they must also find the right balance and treat investors fairly, so they can attract investment… Some existing arrangements have caused problems in practice, allowing companies to exploit loopholes where the legal text has been vague.”

He said Europeans had raised “genuine concerns about this part of the EU-US deal” and “now I want them to have their say”.

Negotiations on other parts of the trade deal will continue as normal, he stressed.

The statement said there was a risk the mechanism could “open the gates for multinationals and investors to sue EU member states if new environmental or health legislation is introduced that adversely affects their business prospects”.

It warned of a “chilling” effect – the fear that legislating in certain areas of public health or the environment could trigger expensive lawsuits with US companies.

That case has been a wake-up call for legislators in Brussels, Inside Story reports.

The main centre-left bloc in the European Parliament, the Socialists and Democrats (S&D), says accepting the ISDS “would mean opening the door for big corporations to enforce their interests against EU legislation” and “this would deprive states of crucial policy space in important fields such as health or environment”.

“We request that the Commission drops ISDS within TTIP altogether,”S&D said in a statement on Tuesday. The trade deal cannot become law unless the parliament approves it.

Questions have also been raised about the dispute settlement mechanism in an EU-Canada free trade deal, which has been negotiated but not yet ratified.

UK Labour MEP David Martin voiced concern that such deals might make privatisations irreversible. He gave as an example the UK government selling off part of the National Health Service to a Canadian firm – and a future UK government finding it legally impossible to renationalise that service.