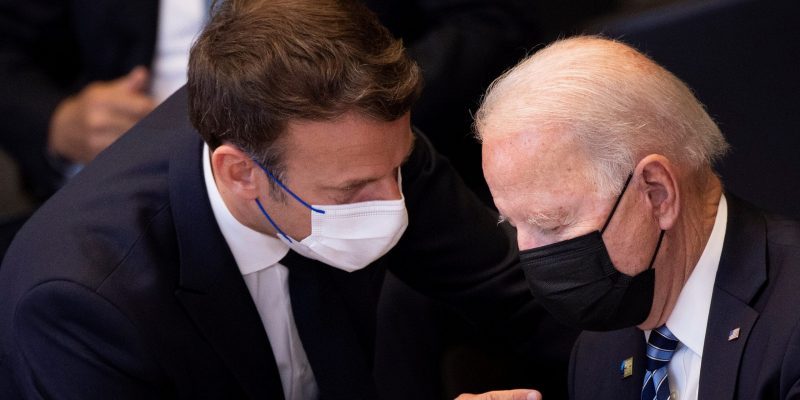 Europe: The Subordinate Ally Of The United States

In recent months, European countries and the European Union have been put under pressure from the United States to substantially break ties with the People’s Republic of China as well as to orient Europe’s military towards confrontation with China. The pressure campaign – which began with US President Donald Trump and continues with his successor Joe Biden – goes against the obvious interests of most European countries. China, not the United States, is Germany’s largest trading partner and has been so for the past five years; Germany, the economic dynamo of Europe, would suffer if it attempts to cut commercial ties with China. China is the European Union’s second biggest trading partner (behind the United States) and the European Union is one of China’s biggest trading partners. These interlinked connections – which cannot be broken without great cost – are threatened by the escalating US-driven hybrid war against China.

Several European countries – France, Poland, Romania, and Sweden – have taken steps to ban Chinese equipment in their 5G networks. Some of these countries have domestic telecommunications firms which would benefit from this kind of security-driven import-substitution; however, European firms – such as Finland’s Nokia and Sweden’s Ericsson – produce equipment that is far more expensive than the gear produced by Huawei and ZTE. Germany has not taken any extreme step, in fact, before Biden’s inauguration, outgoing German Chancellor Angela Merkel attempted to push through a China-European Union Comprehensive Agreement on Investment. The agreement was not completed largely because the Europeans followed the US in sanctioning several high officials of the Chinese government in March 2021. These sanctions came under a new EU Global Human Rights Sanctions Regime set up by Brussels in December 2020.

The European state system jumped on board the US information war against China. Three places shaped the narrative: Hong Kong, Taiwan, and Xinjiang. The outrage in Europe (and in the United Kingdom) was manufactured in Washington, DC; when European, rather than US, officials speak of human rights there is apparently more credibility. Forgotten is the fact that it was the UK which held Hong Kong as a colony, without any democratic rights, from 1841 to 1997 and that it was most of these European states that colluded with the US archipelago of black sites and torture during the War on Terror, and with the US wars of destruction in Afghanistan, Iraq, and Libya. Considerable self-righteous noise comes from the European capitals, amplifying the dossiers produced by the Central Intelligence Agency (CIA); but then this largely unedified noise is often muffled when there is a realisation that this hybrid war on China will negatively impact Europe’s development.

In Brussels, there is an official Museum of Europe, a “place of memory,” which tells the story of the continent in three phases. The first phase, from 1000 to 1500, is that of Latin Christianity, which ended with the 16th century religious wars. The second phase, that of the 18th century Enlightenment, gripped the continent in a struggle over reason, culminating and ending with the French Revolution of 1789. The first project of Europe was held together by Christianity, while the glue for the second was rationality. Neither had a very broad mass base since both were largely elite-driven and elite-focused.

The third great project of Europe, which emerges after Second World War, is that of the construction of the European Community and then the European Union. This was a project that, from its inception, was encouraged by the United States. The US officials wanted to create a united Western Europe to confront the USSR and the Communist state system in Eastern Europe. The two instruments to shape the new Europe were the funds from the Marshall Plan or the European Recovery Program (1948-1952) and the North Atlantic Treaty Organisation (established in 1949); later, the US would establish two more platforms both to craft the European project and to hold it close to Washington: the Organisation for Economic Co-operation and Development (OECD, 1961) and the Group of Seven (G-7, 1973-74).

Strikingly, while the first two projects were held together by Christianity and then by rationality, the third project, the current one, has not been able to say what holds it together. Europe is a set of laws and institutions with a limited ambition. Perhaps this limited ambition results from Europe’s embarrassment at its long history of colonial barbarity and its shorter history of fascist brutality.

Europe’s limited ambition was partly due to the self-suffocation of the ambition of its ruling classes, who sheltered under the hegemony of the United States. This self-suffocation manifests itself in Europe’s continued desire to yoke itself to the aspirations of the United States to dominate world affairs. Europe built its own institutions, but these remained shells, unwilling to go outside what was permitted by Washington. Security measures had to be surrendered to NATO, controlled effectively by the United States; financial arrangements could be shaped by the European Central Bank, but its leadership had one eye on the capitals of the European states and one eye focused on the US treasury department. From its origins, the European project has suffered from far too much dependence on the programmes of the United States.

Not only has the project suffered, but also the European people have suffered. In a matter of a few years, the United States cut off Europe from three of its main suppliers of energy, the cut off taking place through the sanctioning of Iran (2012) and Russia (2014) and by the destruction of Libya (2011). The US driven agenda – to challenge Russia in Eastern Europe and to reshape the Middle East – meant that Europe now struggles to meet its energy requirements. None of the major European countries dissented from a set of policies that negatively impacted Europe’s energy pipelines. Germany’s ties to Russia via the NordStream 1 and 2 pipelines is indicative of the weakness of Europe to stand firm for its own several national and united continental interests. The interests of the United States eclipsed that of Europe and of its constituent states. Indeed, European states actively went ahead to push for the expansion of NATO to include Ukraine (a belligerent move against Russia), to deepen sanctions against Iran, and for the NATO bombardment of Libya. When several European powers (Belgium, Denmark, Finland, Netherlands, and Sweden) got cold feet about the sanctions, they tried to create an alternative payment mechanism that skirted the strict (and illegal) US sanctions. Their Instrument in Support of Trade Exchanges (INSTEX) was formed in 2019 but has only been able to execute a handful of commercial transactions with Iran, mainly of medical equipment during the Covid-19 pandemic.

95 per cent of the world’s magnesium comes from China. As a result of the pandemic, the European sanctions on China, and of the Chinese government’s cutbacks on reliance on coal-fired plants, magnesium exports to Europe have slumped. Germany and the Czech Republic, the countries that make cars, woke up to the fact that the US-inspired sanctions will directly impact their car makers; so Angela Merkel and Andrej Babiš rushed to a press conference to say this and that, but not to say that the US-imposed hybrid war is bad for Europe. That would have been far too direct. Easier to say, ‘urgent action’, ‘supply chains’, and ‘millions of jobs’, verbiage that satisfies the journalists, but will not have a material impact on a declining economic reality.

Will the European project be able to craft an independent, non-aligned foreign policy? Can Europe be rational regarding Russia and China, engaging them outside the imperatives of US national interest and the existential demands of multinational corporations? The European Union is to have a summit with China soon. This will be the first summit since the March sanctions levied by the EU on China. European Council president Charles Michel says, “dialogue remains crucial.” What will be the mood of the summit? Will the European state system follow the lead of the US government and go for confrontation, or will it follow the lead of Dr Tedros Adhanom, the head of the World Health Organisation (WHO) and say, collaboration not confrontation?