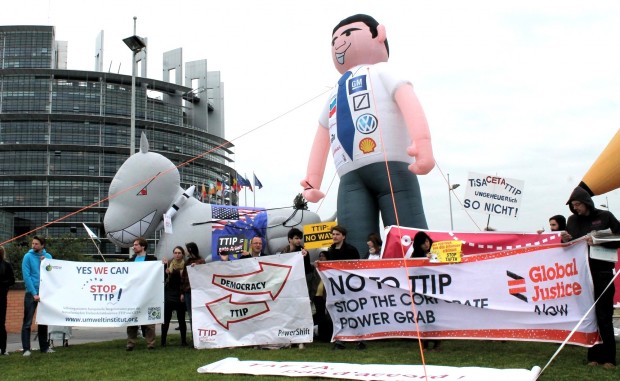 The European Parliament voted this week to move forward on the stalled Transatlantic Trade and Investment Partnership (TTIP) negotiations. The negotiations had been stalled over a number of disputes, in particular the trade tribunals created for Investor State Dispute Settlement. Bloomberg reported:

“The European Parliament demanded limits on legal protection for foreign investors in any free-trade agreement with the U.S., highlighting the political sensitivity of an issue that could scuttle a trans-Atlantic deal.”

The Parliament attempted to bring the issue to a vote on June 10th but due to controversy and fear that the ISDS would be completely removed from TTIP, delayed and re-wrote the resolution on the issue. Guy Jones of Global Justice Now described “an array of underhand political tactics” and the process including “shocking examples of devious political manoeuvring, angry scenes on the floor of the chamber, and misleading claims by proponents of an old enemy dressed up in new clothes: ISDS-lite.”

The Parliament which has the power to approve or reject, but not to amend, any final agreement, voted 436 in favor and  241 against for a resolution which includes a non-binding set of recommendations to the European Commission. Opposition in the Parliament has come primarily from the Greens, the far-left and far-right groups, as well as several dozen MEPs in the centre-left group. Intellectual Property Watch reports: “Some members of the conservative European People’s Party Group (EPP) and the Socialists and Democrats (S&D) joined the Green and Left Party groups in asking to exempt ISDS from the negotiations completely.” As in the United States it is the populists vs. the corporatists.

The European Commission, the EU’s executive arm, suspended talks last year on ISDS with the U.S. because of widespread concerns in Europe about the tribunals. The commission completed a public consultation on the merits of negotiating an ISDS clause in TTIP in January. In the process 145,500 people (97 % of the total of 150 000) told the European Commission in its consultation on the issue that they wanted ISDS to be removed from TTIP. In addition 2.3 million people have given it their support to a European Citizens Initiative calling for an end to TTIP negotiations. Further, hundreds of municipalities have declared themselves ‘TTIP-free-zones’ in opposition to a negotiation in which they are not consulted and that will affect their ability to regulate at the local level if it comes to an agreement.

Guy Jones reports that a populist revolt was ignored, much like we saw in the United States over Fast Track trade authority:

“Almost all the MEPs that voted in Parliament today have received many thousands of emails from their constituents wanting them to vote against TTIP because they’re concerned about the impact it will have on vital public services, on consumer rights, on regulations protecting workers and the environment. It shows who’s paying the piper in Strasbourg that MEPs can ignore such a strongly articulated public mandate and instead vote in favour of corporate interests.”

The resolution says ISDS should be replaced with a new system “subject to democratic principles and scrutiny.”  Further, “the 28-nation Parliament also called for an arbitration system where ‘the jurisdiction of courts of the EU and of the member states is respected, and where private interests cannot undermine public policy objectives.'”  Other changes to the tribunal system would include “‘publicly appointed, independent professional judges,'” instead of corporate lawyers, as at present, and holding public hearings with an appeal mechanism.” European Parliament president Martin Schulz described the new tribunals as a “public court” and told the assembly “private systems of this type are dead.”

The approval of the resolution still maintains the basic framework that allows foreign investor corporations to sue for lost profits caused by a law passed in the public interest. Further “the new investor courts are just as one-sided as the current ISDS tribunals: although companies will be able sue the EU and member states for billions, with the public footing the bill, there is no mechanism for the EU to sue companies. The best the public can ever hope for is not to lose.”

Nick Deardon the executive director of Global Justice Now said “These reforms are purely cosmetic. In essence, foreign investors are still to receive substantial additional rights compared with domestic companies and a parallel justice system to domestic courts to enforce these rights.” Ars Technica UK reports “the wording is extremely vague, and it is not clear how it will change things in practice.” Monique Goyens, the director of Beuc, a pan-EU organisation representing consumer groups, expressed doubts, saying: “Opposition to ISDS continues to grow and will not be appeased with sketchy compromises.”  Greenpeace pointed out in a press release criticising what it called the “Euro-fudge on private TTIP courts.” Paula Jones of Global Justice Now describes this as a “travesty of democracy” and “another example of the EU’s inability to act in the interest of its citizens, favouring capitalist interests above all else.”  Guy Jones also of Global Justice Now wrote “The compromise that was adopted today will do nothing to change that fact.”

In addition, a senior US official has already rejected the idea of creating new investor courts so the European Parliament’s recommendation on ISDS may amount to little more than political window-dressing.

As in the United States there is broad opposition to corporate trade agreements and they have taken the same secrecy approach in order to minimize opposition: “TTIP is being negotiated in secret. Our elected representatives in the House of Commons are not allowed to see the draft negotiating texts. Our elected representatives in the European parliament had to hold a demonstration in the European Parliament before being granted permission to see these texts in January this year. Even now they can only see the texts in a locked room if they have removed any possible recording devices, including their mobile phones, and signed a 14 page agreement to keep the contents secret.”

Guy Jones sums up what the vote means and what must be done to stop corporate, rigged trade:

“We need to redouble our efforts to defeat TTIP, we need to be wary of false promises from those who claim to be on our side. We need to engage more people in the fight against corporate power. This vote was not a binding vote on TTIP, in the long run today’s disappointment is in no way a game-changer.”

“More than 2.3 million Europeans have signed a European Citizens’ Initiative and demand an immediate stop to the TTIP negotiations. These citizens were completely ignored today by the European Parliament. We will make sure their voices will be heard in the months to come. On 10 October we’re calling for a European Day of Action against TTIP and CETA, the EU-Canada trade agreement. Large demonstrations are planned in Germany and The Netherlands, while decentralised actions will take place in hundreds of cities in many other European countries such as France, Spain, Poland and Austria. We will continue to fight for our democracy, rule of law as well as social and environmental standards.”