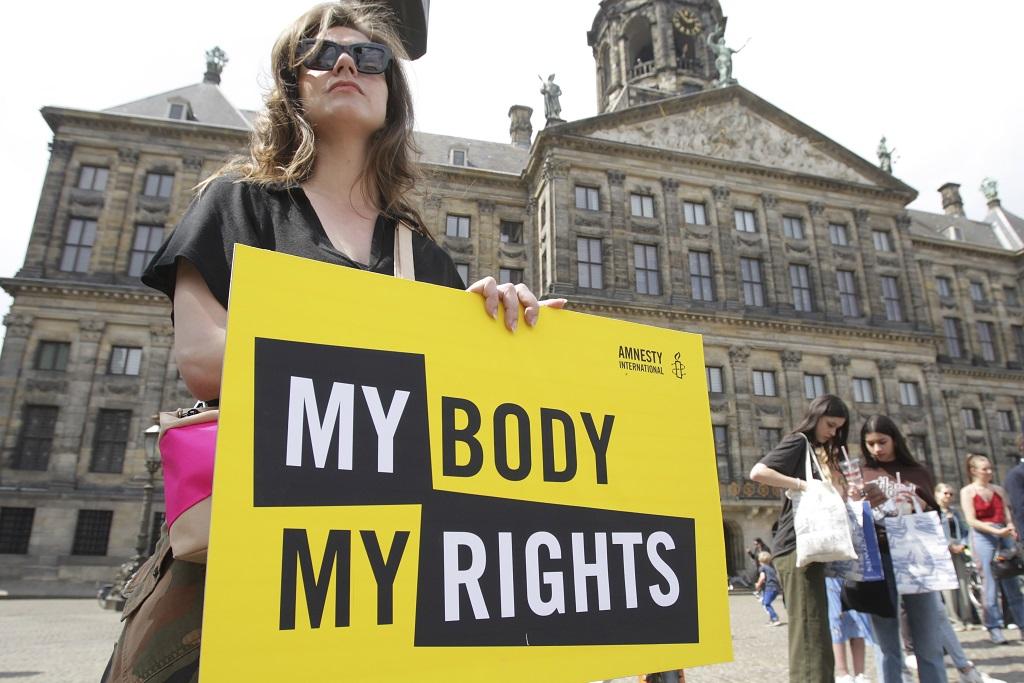 Above Photo: Activists and supporters protest in solidarity for abortion rights at Dam Square, May 7, 2022, in Amsterdam. Paulo Amorim / SIPA USA/AP.

In both access to abortion and a pro-family welfare state, Europe beats the US hands down.

Since the end of Roe v. Wade, numerous European political leaders have lamented the decision. British Prime Minister Boris Johnson labeled the Dobbs decision a “big step backwards,” and French President Emmanuel Macron said abortion “must be protected,” as his country prepared to place a nationwide right to abortion in its constitution.

In response, conservatives have cried hypocrisy, both to deflect criticism and to cast doubt on European institutions in general. “Many of the leaders who criticized the United States for the decision have laws that are either comparable to the Mississippi law at the center of Dobbs v. Jackson Women’s Health, which outlawed abortion past the 15th week of pregnancy,” Charles Hilu writes at National Review. “Americans should be very skeptical of the opinions of leaders across the pond.”

But this is not true on multiple levels. Though there are some moderate restrictions on abortion access in most European countries (and strict ones in a few), in practice almost all of Europe had far greater access to all aspects of reproductive freedom than Americans did even before Roe was overturned, and vastly greater freedom now.

Let me start with abortion rights. As Politico Europe points out, every major European country except the U.K., Poland, and Finland allows abortion on demand for at least part of the pregnancy term, typically the first trimester, and the U.K. and Poland have wide latitude in their rules. (Andorra, Liechtenstein, Malta, Monaco, and San Marino have stricter rules, but they are tiny.)

As the Center for Reproductive Rights elaborates, there are some moderately burdensome requirements in some countries, like waiting periods in Eastern Europe or mandatory counseling in Germany. In countries like Italy, it can be hard to find a doctor willing to perform one. But none of these countries are anything like Mississippi, where a restrictive abortion law is combined with systematic legal harassment that had closed down every abortion clinic but one by 2004.

Moreover, outside of Poland, major European health care systems render these restrictions far less meaningful than they might sound. The overwhelming majority of people who want an abortion will get one as soon as possible, and thanks to the fact of universal health care in most European countries it is a relatively simple matter to get an appointment and arrange payment. Pregnancy is a difficult, dangerous, and often quite unpleasant experience, and doubly so if the pregnancy is unwanted; very few normal people will procrastinate about ending one if they can help it. Almost all abortions happen either very soon after becoming pregnant, or after learning of some terrible medical problem later in the term, in which case it is widely acceptable across Europe.

Unfortunately for Americans, our awesomely horrible health care system often means tremendous obstacles to even the simplest medical needs. About 9 percent of Americans are uninsured, and a further quarter are underinsured—and thanks to the Hyde Amendment, Medicaid will not cover abortions except in case of rape, incest, or if the mother’s life is in danger.

The theoretical expansive access provided by Roe did not actually translate into reality for many: In the 2014 Guttmacher Institute Abortion Patient Survey (the most recent one), 53 percent paid for theirs out of pocket. It also found half of abortion patients below the poverty line, and another quarter below twice the poverty line; it can take weeks or months for such a person to scrape up even a few hundred dollars if they can do it at all. And now, of course, outright bans are either enacted or coming soon in something like 26 states.

Second, the punishments for European abortion regulations are almost always far less punitive than ones written by American reactionaries (again, except in Poland). Criminal penalties of any kind are relatively rare, and nowhere is there anything like the deranged bounty hunter law Texas cooked up.

On the other hand, there is the positive aspect of reproductive freedom—that is, the freedom to choose to have children. For workers living on wages (that is, most people), having a child is a problem for three reasons. First, one’s childbearing years come early in life, when one’s income is typically at its lowest point. Second, one must take time off work to care for the child, especially when it is first born. Third, children cost tons of money to raise, which creates enormous inequality between families based on how many kids they have.

Hence the European welfare state for families, which addresses these problems through paid leave for new parents, a child benefit to help with expenses, public provision of child care, and public school. Though institutional details vary considerably across the continent, on these terms Europe is simply blowing America out of the water.

The Nordic countries set the highest bar; their systems are incomprehensibly generous by American standards. Norway, for instance, has one year of parental leave that can be split up in various ways, and both public day care facilities and subsidies for private options, a child allowance of about $170 per month for children under six and $107 per month for children six and over, and public school (along with several other smaller benefits).

The U.S., by contrast, has no national paid leave (one of only two countries on Earth without it) and no public child care. For a year, we had a jerry-rigged child allowance that all parents were theoretically eligible for (though incompetent design left out many of the poor), but Joe Manchin killed that, and today the poorest parents with little or no work income once again get nothing from the Child Tax Credit. We managed to sneak through public school, though not universal pre-K.

American reactionaries barely even pretend to care about the massive anti-family coercion created by our atrocious welfare state. A 2004 Guttmacher survey of abortion patients found fully 73 percent including an inability to afford another child among their reasons for terminating a pregnancy, yet the best movement gurus like Chris Rufo can come up with are addle-brained schemes to provide a pitiful three months of paid leave by pushing back parents’ retirement age. The belief expressed by eternally optimistic people like Ross Douthat or Peggy Noonan, that now will be the moment that conservatives combine their concern for the life of a fetus with support for parents who have to take care of the child after birth, is so ludicrous that it gets laughed at routinely in polite company.

In right-wing utopia, all Americans will find abortions difficult or impossible to obtain, even in cases of medical necessity, and then those new parents (the ones who survive giving birth, that is) will get very little government help raising the child they didn’t want. Almost no Europeans live like this and they are right to be proud of that fact.