Since the dismantling of the USSR and the Socialist Camp in Eastern Europe, and the emergence of the so-called “Unipolar World,” U.S. imperialism and its EU and NATO allies have embarked on a global project of “Full-Spectrum Dominance” with the objective of complete domination of the whole globe.

Starting with the first attack on Iraq in 1991, followed by the NATO attack on Yugoslavia and partitioning of that country in 1999, imperialist powers set on the path of attacking one country after another through military invasions, political interventions and coups, assassination attempts, and imposition of illegal economic blockades and sanctions on close to forty nations. Taking advantage of the criminal attack of September 11, 2001, the policy of forced “regime change” was placed on top of their agenda and was successively implemented in Afghanistan, Iraq, Libya, Syria, Venezuela, Cuba, Nicaragua, Bolivia, and Iran, with many other countries still on their list.

The military, economic, human and environmental costs of these imperialist attacks have been horrendous for all targeted countries, in particular, and for the peoples of the world in general. These imperialist aggressions have led to the death of hundreds of thousands innocent civilians, millions of displaced people and homeless refugees, destruction of many countries’ economic infrastructure, overthrow of several democratically-elected popular governments, and devastation of the environment across the globe — all in violation of United Nations Charter and the Universal Declaration of Human Rights. In short, they have pushed the whole world to the brink of a global catastrophe that is threatening the survival of the whole humanity.

Despite the decades-long heroic efforts of peace, justice and environmental activists and organizations around the world, the global peace and justice movement has not been successful in putting an end to the imperialist states’ criminal aggressions. This is more than anything else a result of the prevalent confusion about the inherently violent and militaristic nature of imperialism, whose continued survival depends on militarism, war and global economic and class exploitation.

The need for a clear understanding of the nature of the global imperialist system and the forces that are driving its aggressive policies has now become a pre-requisite for the global peace, social justice and environmental movements to forge a unified, coordinated anti-imperialist front that is urgently needed to confront the imperialist war machine and save the humanity from total annihilation.

Based on understanding this urgent need, the World Peace Council and the Coalition Against U.S. Foreign Military Bases have joined hands to organize an international conference to promote deeper understanding of the nature of imperialism and its deadly threat to the survival of the humanity, and to bring all anti-imperialist forces around the world together to form a unified, well-coordinated, and effective struggle against imperialism and its aggressive, anti-human policies around the world.

We call upon all defenders of peace, justice and the environment throughout the world to join us in this effort by signing on to our call, and to co-sponsor, register and participate in the International Anti-Imperialist Conference to be held on March 28-29, 2020 in Larnaca, Cyprus. 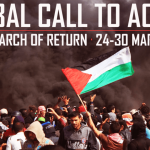 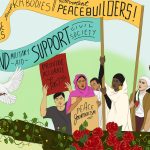