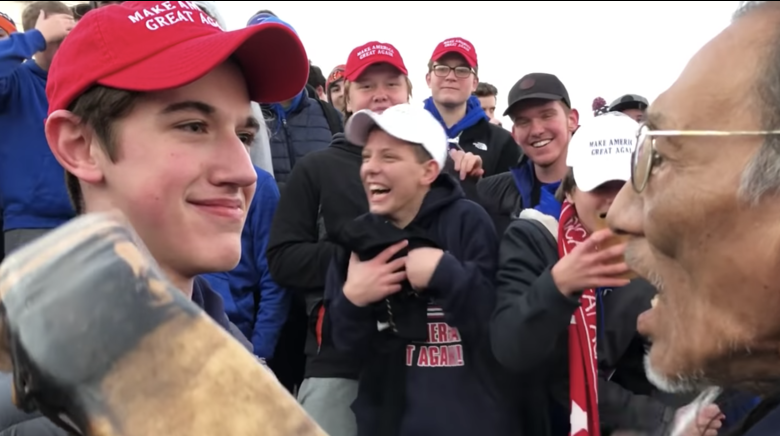 Events At Lincoln Memorial Highlight How Far We Have To Go

Above photo: A screengrab from the viral video showing a teenager standing in front of veteran Nathan Phillips in Washington, D.C. on January 18, 2019.

In the wake of the events at the Lincoln Memorial after the Indigenous Peoples March, much has been said and written. After all the spin, we believe the clearly visible facts of the incident involving Nathan Phillips highlight the importance of having a real discussion about normalized and systemic racism and the need to build bridges of understanding that allow us to move forward as a society — peace with justice.

We believe in our brother, and we share Nate’s goals of bringing attention to the issues that divide us, of taking strong action to stop the cycle of repression and disrespect toward Indigenous people and immigrants, and of forwarding a progressive vision for a better future.

Let’s use what happened to keep the focus on the reasons we marched in the first place: stopping the epidemics of Missing and Murdered Indigenous Women; the removal of Native American children from their families and tribes in violation of the Indian Child Welfare Act; and the despoiling of sacred, tribal lands by fossil fuel companies hellbent on warming our climate to a dangerous level.

Let’s show, en masse and unencumbered, that we won’t accept the spin from right-wing media outlets. Their game plan attempts to switch the focus to irrelevant details and conveniently ignore the genocide of Native Americans and past enslavement of African Americans — meaningful context to what happened in D.C. An Omaha-Ponca elder stepping in to halt a hostile exchange and diffuse racial tension is an act of bravery that needs to be replicated, not covered over.

The events at the Lincoln Memorial highlight how far we still have to go. You can help us harness the power of that moment to create real change. Your voice is needed, now more than ever.

Please sign onto our open letter today, and share it far and wide. Your support can help us continue to engage key influencers — political figures, clergy, and allied organizations among them — and ensure that Nathan’s stand was not in vain. You can help Indigenous peoples take back our collective power by standing with Nathan Phillips, in dignity, for peace with justice.