Santa Cruz, CA – Graduate student teaching assistants (TAs) at the University of California in Santa Cruz (UCSC) are fighting for a livable wage. A year of unsuccessful attempts to encourage their employer to re-negotiate a fairer contract, including a cost-of-living adjustment (COLA) to their pay, has escalated into a full labor strike. In turn, dozens of workers have been fired by the university in retaliation for the Pay Us More UCSC campaign. 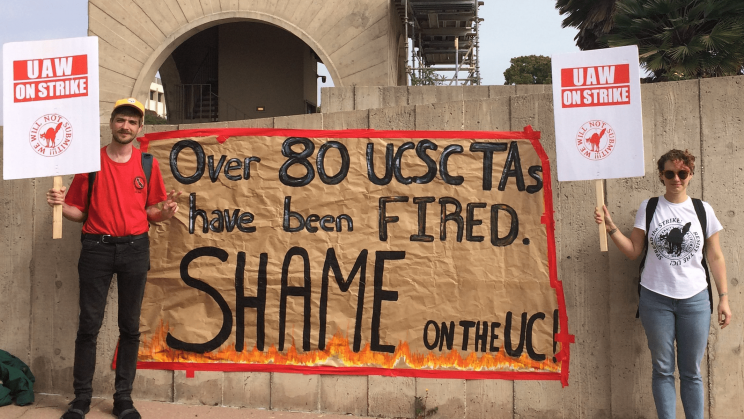 “Over 80 UCSC TAs have been FIRED,” reads a sign made by UCSC strikers. Image courtesy of @PayUsMoreUCSC

All 10 campuses within the University of California (UC) pay their graduate student TAs the same wages regardless of the cost of living in each city. Wages have not kept pace with the cost of living in Santa Cruz, creating a desperate situation for workers who must choose between rent payments and other basic needs such as buying food or doctor visits.

Unicorn Riot interviewed Yulia Gilich, one of the organizers of the wildcat strike and a fourth-year Ph.D candidate at UCSC. They told us about the “digital picket” that continues despite UCSC shutting down the campus to mitigate the spread of COVID–19, and added that they hope to see the strike spread because “everyone deserves a COLA, and everyone deserves a dignified life.”

UC grad student TAs are all part of the same bargaining unit within UAW 2865. In 2018, the labor union signed a new contract on behalf of UC grad student workers which specified that workers are not permitted to strike. Though the contract guaranteed that all TAs across the UC system were guaranteed a 3% annual wage increase, in Santa Cruz the cost of rent have increases about 15% each year.

Gilich asserted that “the union undemocratically passed the contract.” Although technically the vote to ratify passed with a 58.6% majority of UC students across the state voting to accept it, over 82% of UCSC respondents voted against it. Two other UC campuses voted against: San Diego and San Francisco, both of which appear on lists of most-expensive cities in the United States, making UC students who live there more rent-burdened than students in other UC cities.

“The cost of rent and cost of living are exorbitant. So even in 2018 we knew that this contract was not gonna serve us, we’re not gonna be able to survive on this.” — Yulia Gilich, UCSC strike organizer

For about a year afterwards, a group of organizers tried to overturn the contract and return to the bargaining table. When that effort failed, UC graduate students began to put together a Santa Cruz-specific campaign for a cost-of-living adjustment (COLA).

TAs are demanding a minimum monthly raise of $1,412 to augment their monthly wages of $2,100; most UC graduate students are only paid nine out of twelve months per year due to a summer break. The average rent in the UCSC neighborhood is over $2,500 per month.

“[TAs] at each and every UC campus are now considered rent-burdened, according to criteria laid out by the U.S. Department of Housing and Urban Development.” — UAW 2865 website

Though the COLA campaign has been popular among UCSC undergraduates and faculty in addition to graduate students, the university responded with threats of intimidation and sending riot police to the early days of the picket. 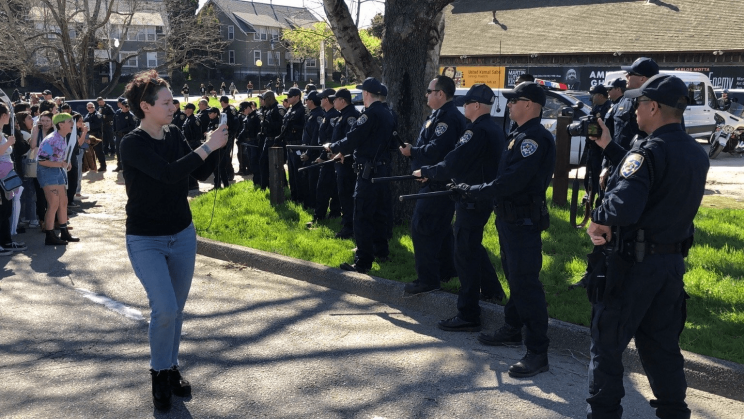 Yulia recording the line of riot police squaring off against UCSC protesters. Image courtesy of @PayUsMoreUCSC

In a statement published February 19 to UC President Janet Napolitano, faculty called upon the university to”refrain from punitive action against graduate students during the strike and from retaliation against them once the strike has been concluded.”

According to Gilich, the university filed student conduct charges alleging they “deleted grades from a university-managed grade system.” The position of the TAs and the union is that grad students only have access to the grading system because of their status as workers, therefore “this should be handled through the union” rather than through the university’s student disciplinary system.

“So it’s not enough that they fired us as workers. To me it seems like they’re targeting people who are facing student conduct charges and they’re going to try to expel them.” — Yulia Gilich

The outpouring of support for the COLA campaign seemingly caused UAW 2865 to change its position on whether the university should have to wait to renegotiate their contract with the TAs. Unicorn Riot reached out to the labor union for a statement on why they had reversed their position, we learned that their office in Alameda County, California has been closed until further notice due to the ongoing COVID–19 pandemic.

Two unfair labor practice charges have been filed by the union — the first in February for UC’s refusal to negotiate with the labor union (the TA’s legal representative), and the second less than a week later for UCSC’s retaliation against the striking workers.

Yulia expressed gratitude for the outpouring of support and community-building from other UAW union members nationwide, as well as from UCSC faculty and undergrads. In a video showcasing the responses of grad students and allies to the firings, one person remarked that the campus-wide shut-downs wouldn’t have been possible “if it wasn’t for the undergrads” who joined the picket line by the hundreds. 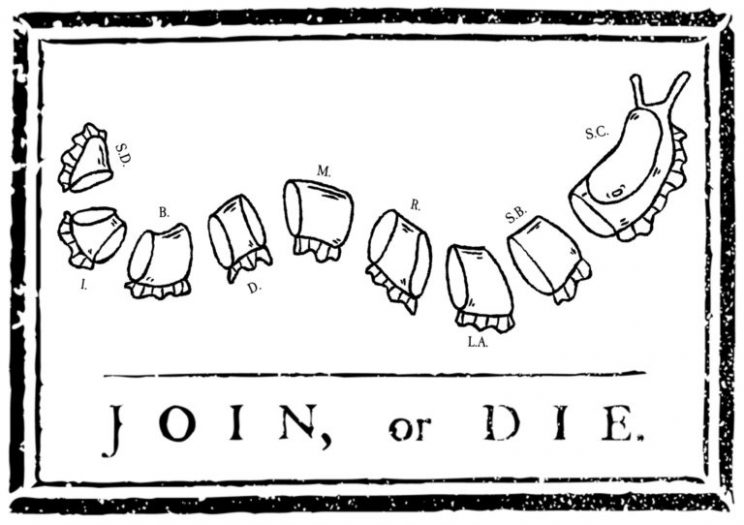 As workplaces and schools shutter around the country due to the ongoing COVID–19 pandemic, the precarious existence of working-class people in the United States becomes more apparent. In past months the #COLA4all labor strike has spread from UCSC to other UC campuses, and in the past two weeks rumors of an April 1 rent strike have been circulating.

Low-wage earners around the United States and elsewhere may be preparing to revolt en masse. Stay tuned for further coverage regarding the coming strikes.