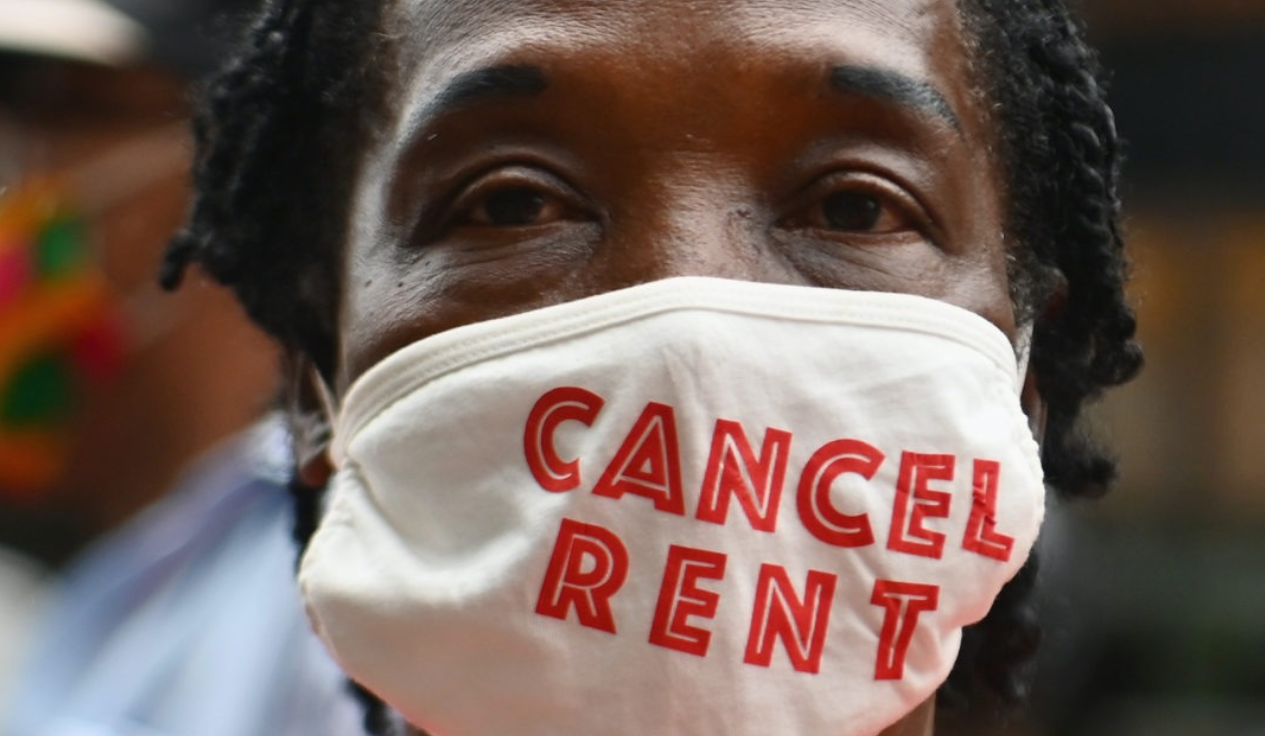 Above photo: Protestors demonstrate during a ‘No Evictions, No Police’ national day of action protest on September 1, 2020 in New York City.

Tenants and progressive leaders who cried out for a national action must now grapple with two truths.

This eviction moratorium will save lives, but everything about it is a page out of Trump’s re-election playbook.

On Tuesday, when the rent was due once again and as 43 million Americans braced for possible eviction, the Centers for Disease Control and Prevention (CDC) issued a nationwide eviction moratorium that will run from Friday through Dec. 31.

This eviction moratorium, unlike the one under the CARES Act policy that expired in late July, appears to apply to all rental units nationwide. Now, regardless of whether they receive federal funding or financing, landlords may not evict their tenants based on their inability to pay the rent.

The order applies wherever there is not a more protective state moratorium in effect, like in Missouri and Alabama, where the governors never issued statewide eviction protections. But it does not override any jurisdictions that provide the same or greater protections for tenants.

The CDC order responds to months of outcry from organizers, tenants, and policymakers, taking a decisive stance: ending evictions is a public health imperative. The order reads: “In the context of a pandemic, eviction moratoria—like quarantine, isolation, and social distancing—can be an effective public health measure utilized to prevent the spread of communicable disease.”

In order to benefit from this protection, tenants will have to declare their inability to pay to their landlord, using a form provided by the CDC (and included in the text of Tuesday’s order). Tenants are eligible to make this declaration if they earn less than $99,000 annually or less than $198,000 as a household, were not required to report income in 2019, or received a stimulus check.

The CDC’s national eviction moratorium may keep millions of tenants in their homes until the new year, and in turn it could save untold numbers of lives as COVID-19 remains an active threat. But, of course, it’s not so simple.

The requirement that tenants swear they meet certain income- and need-based criteria may exclude some tenants, such as undocumented immigrants and participants in the informal economy, like domestic workers and food vendors, who may not have standard documentation of their wages.

Tenants will have to certify that they are unable to pay their rent because of coronavirus, that they are likely to become homeless as a result of displacement, and that they have made their “best efforts” to get any government assistance available to them to make rent. These requirements are vague, which could benefit tenants, but could also leave too much subjectivity in the landlords’ hands.

We know that landlords will find ways to evict and retaliate against their tenants because it’s already happening. The eviction moratorium only pertains to rent-related evictions. Landlords may still evict their tenants on the basis of a lease violation—say, a noise complaint. Landlords will keep pursuing informal evictions using intimidation tactics like utility shutoffs, refusing repairs, and more. Tenants and organizers will have to keep a close eye on local trends and be ready to challenge landlords who exploit loopholes, escaping the parameters of this moratorium.

Tenants must still pay the rent, debts will mount, and landlords will continue to profit from their control over tenants’ most basic need: their home. The CDC order does not stop tenants from accruing rental debt, nor does it prevent landlords from continuing to charge fines, fees, and interest. Landlords have invented all kinds of profit-maximizing machinery like pet deposits, trash fees, and more. The threat of such costs, and the associated debt, can itself serve as an intimidation tactic to force tenants from their homes. Rental debts follow tenants even after an eviction, through wage garnishments and bad credit scores.

Finally, legal challenges are likely. Almost immediately after the announcement, lawyers and reporters and tenants alike began questioning the CDC’s authority to take such an action. As of now, the order will take effect on Friday, but it will almost certainly face legal challenges. Even if those challenges are unsuccessful, they will undoubtedly confuse tenants, and they may complicate local enforcement.

The Trump administration has been quick to celebrate the national eviction moratorium as his offering to working families. But it must not be attributed to Trump. This is a victory for tenants. Tenants orchestrated a mass rebellion since March, sharing their stories, organizing their buildings, and executing the largest rent strike in history. Meanwhile, Trump and Republican leadership in Congress have mostly ignored the deepening emergency among poor and working-class tenants.

All those who cried out for a national response to protect tenants must now grapple with two truths: This eviction moratorium will save lives, protecting tens of millions of households from violent displacement—albeit for a relatively short period of time—and everything about this order is political, a page out of Trump’s re-election playbook.

We should acknowledge that governors and mayors, including many Democrats, failed to protect tenants before the Trump administration took this step. As the pandemic rages on, it seems that real estate interests have tightened their chokeholds on state and local officials of both major political parties. Ignoring the looming eviction and homelessness crisis was never going to serve Democrats, and now they’ve been outflanked by Trump.

“Does it apply to me?” That was Ashley Johnson’s first question when I called her Tuesday to tell her about the moratorium. Ashley is a tenant in Kansas City, Missouri, and a grassroots leader with KC Tenants, the local organization I direct. A single mother of three kids, she works several jobs, but employers cut her hours in late March, and she has struggled to remain housed ever since.

Ashley’s landlord is evicting her, and it is getting messy. Last Wednesday, Ashley’s landlord sent maintenance workers to her home while Ashley was at the office. They shoved past Ashley’s teenage daughter to remove the family’s stove. On Friday, Ashley came home to a disconnect notice from the utility company. Ashley is due in eviction court Thursday, but she has already been forced from her home.

The CDC eviction moratorium does not apply to Ashley. She is not being evicted for past-owed rent, but for possession of the property. The landlord simply doesn’t want to “deal with tenants” anymore, and she is using COVID-19 as an excuse to get Ashley out. Ashley will still have to appear in court by teleconference tomorrow morning, and the judge is likely to issue a formal eviction judgment. Ashley will need to find a new place to live.

Too many tenants are in Ashley’s position. Landlords have filed tens of thousands of evictions during the pandemic. Tenants have been evicted because they live somewhere that never had an eviction moratorium, or their moratorium expired, or because their landlord forced them out through an informal process, outside of the court system. The CDC moratorium does not provide recourse to tenants who have already been displaced.

Some tenants like Ashley have scraped together their rent payment month after month, even though they could not afford it. Others have been pushed into high-risk jobs to make the bills. Because of inaction from policymakers, these tenants put their lives at risk and paid their last savings to their landlords, sacrificing other basic needs, to meet their rent obligation. It didn’t have to be like this.

Tenants know better than anyone: Eviction moratoriums were never going to save us, at least not on their own. That’s why tenants have demanded rent and mortgage cancellation, combined with a nationwide eviction moratorium, since March. Tenants worked closely with Representative Ilhan Omar of Minnesota to introduce House Resolution 6515, the Rent and Mortgage Cancellation Act, in April. The bill would cancel rent and mortgage payments for the duration of the crisis, and provide conditioned relief for some property owners. No rent payments, no late fees, no debts.

For now, tenants and organizers will spread the word about the CDC eviction moratorium, inform their neighbors of their rights, continue unionizing, and track landlord noncompliance and retaliation. Lawyers will have to defend the legality of this eviction moratorium and seek out sufficient local enforcement.

Lawmakers must cancel rents and mortgages so tenants are not stuck with significant, insurmountable debt come January. And in the long run, the federal government must take sweeping action to dismantle the American housing system that puts landlords’ profits over tenants’ lives; we must guarantee housing as a public good.

Tara Raghuveer is director of the Homes Guarantee campaign, based at People’s Action, a national network of grassroots organizations committed to economic and racial justice. She is also the director of KC Tenants, an organization led by a base of poor and working class tenants in Kansas City.