Above photo: Demonstrators display signs calling for an end to evictions and foreclosures during a rally at Boston Housing Court outside the Edward W. Brooke Courthouse on Oct. 29, 2020. David L. Ryan/The Boston Globe via Getty Images.

New research finds that when eviction bans lifted, cases of the virus surged.

Expiring state eviction bans have led to hundreds of thousands of additional coronavirus cases, new research finds, raising alarm about what will happen when the national eviction moratorium lapses next month.

During the pandemic, which at one point was estimated it would displace as many as 40 million people, 43 states, plus Washington, D.C., temporarily barred evictions. Many of the moratoriums lasted just 10 weeks, while some states continue to ban the proceedings.

The findings are not yet published in a journal but will be available online Monday.

“When people are evicted, they often move in with friends and family, and that increases your number of contacts,” said Kathryn Leifheit, one of the authors on the research and a postdoctoral fellow at the UCLA Fielding School of Public Health. “If people have to enter a homeless shelter, these are indoor places that can be quite crowded.”

To best understand the direct impact that evictions continuing in a state has on the spread of the coronavirus, the researchers controlled for stay-at-home orders, mask orders, school closures, testing rates and other factors. The study period was from March to early September, before the most recent spike in cases. 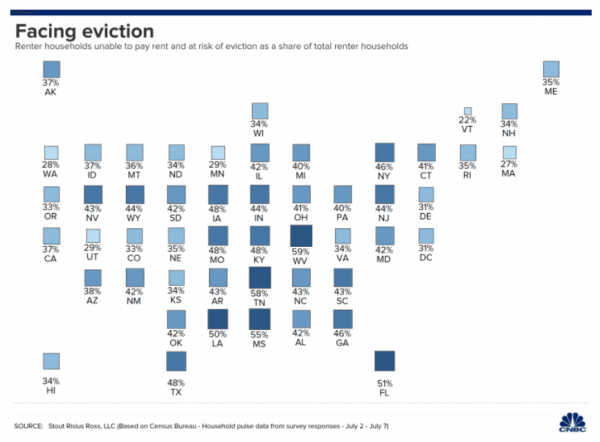 It was also in September that the Centers for Disease Control and Prevention ordered a nationwide halt to most evictions through the end of the year to curb the outbreak that, in the U.S., has sickened more than 12.9 million people and left over 263,000 dead.

If the CDC’s eviction ban isn’t extended until 2021, experts say, many new cases are likely to emerge from people being forced out of their houses and apartments.

“This is a time where it’s not an overstatement to say that for many people, eviction can lead to death,” said Helen Matthews, communications manager at City Life Vita Urbana, a nonprofit in Boston.