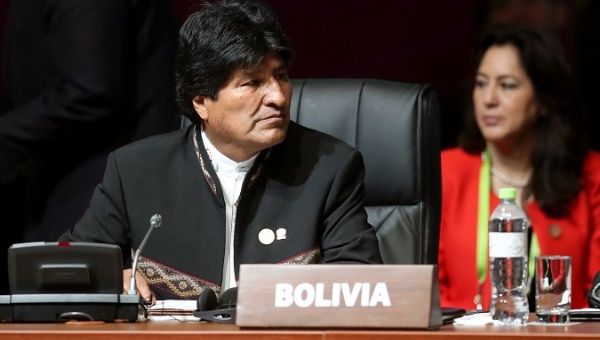 Evo Morales: ‘US Is Greatest Threat To Freedom, Democracy’

Above Photo: Bolivia’s President Evo Morales during the opening session of the Summit of the Americas in Lima, Peru, April 14, 2018. | Photo: Reuters

“The biggest threat against freedom, against democracy, against Mother Earth and against multilateralism is the United States,” Bolivian President Evo Morales said.

Bolivia‘s President Evo Morales has warned that the United States is the greatest threat to democracy, and that Latin America mustn’t serve its agenda, following the attacks waged by the United States, France and the United Kingdom against Syria.

“The biggest threat against freedom, against democracy, against Mother Earth and against multilateralism is the United States. I am not afraid to say this openly,” Morales said at the Summit of the Americas. “Washington spends hundreds of thousands of dollars on weapons of mass destruction.”

The president pointed out that Bolivia has shaken itself free of the influence of the U.S. Drug Enforcement Administration (DEA) and the International Monetary Fund (IMF).

Morales’ leadership has been marked by an effort to expel these institutions, or limit their influence. In 2011 he expelled the U.S. Agency for International Development (USAID), accusing it of funding NGOs working against the nation’s sovereignty.

Morales later took to Twitter to criticize fellow leaders at the summit for “submitting” to the United States by saying they won’t recognize Venezuelan President Nicolas Maduro’s possible reelection next month.

“Trump, the leader that uses arms instead of arguments. In an act of submission, some leaders anticipate that they will not recognize the possible re-election of brother Maduro. The revolutionary presidents enjoy the support of their people, and do not need the approval of the empire.”

Morales also criticized the “complicit silence” of Organization of American States (OAS) General Secretary Luis Almagro ahead of the violence waged against the “brother people of Syria.”

While leaders discussed the theme of corruption at the Summit of the Americas, Morales argued that capitalism is the principle cause of corruption in government.

“Our duty is to debate fundamental topics of the life of our people, and the struggle against corruption is one of these topics, but it would be superficial and a misuse of public resources to say that we should have these discussions without speaking of causes.

“Capitalism is the worst enemy of humanity and the planet. As long as we don’t take concrete actions to eliminate tax havens and put fiscal controls on transnational companies which promote and encourage corruption and human rights violation; as long as we do not suppress secrete banking, nor democratize the International Monetary Fund, nothing will be enough. The problem of corruption is capitalism.”

Morales has been critical of the ways in which corruption charges – with little evidence – have been used to remove progressive leaders such as Brazil’s former President Luiz Inacio Lula da Silva through judicial means and media defamation.