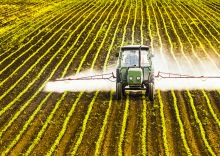 Above Photo: From Ewg.org

SAN FRANCISCO – Today’s verdict in favor of a California man who said his cancer was caused by exposure to Bayer AG’s Roundup weedkiller is further evidence that glyphosate, the herbicide’s active ingredient, is carcinogenic to humans, said Environmental Working Group President Ken Cook.

In the first phase of Edward Hardeman v. Monsanto Company, the jury sided with arguments and scientific evidence presented by the attorneys for Edward Hardeman that glyphosate was the cause of his non-Hodgkin lymphoma.

“Today’s verdict reinforces what another jury found last year, and what scientists with the state of California and the World Health Organization have concluded: Glyphosate causes cancer in people,” said Cook. “As similar lawsuits mount, the evidence will grow that Roundup is not safe, and that the company has tried to cover it up.”

Now the case before the federal district court in San Francisco will enter the second phase of the trial. Hardeman’s lawyers will present evidence to the jury, including internal Monsanto documents, that could show the company knew the dangers of Roundup and glyphosate and attempted to cover them up.

Judge Vincent Chhabria, who is presiding over this case, unsealed some of those documents in March 2017. The New York Times reported that they show how Monsanto systematically attempted to discredit scientists and independent scientific research, swayed scientists at the Environmental Protection Agency over its review of glyphosate, and even ghostwrote stories that appeared to be authored by scientists not affiliated with Monsanto.

“The decision by Bayer to purchase Monsanto, a company with a long history of environmental malfeasance, could go down as one of the worst business decisions ever made,” added Cook. “The day of reckoning for Bayer and its cancer-causing weedkiller is getting closer.”

In August, another California jury awarded Dewayne Lee Johnson, a former groundskeeper who regularly handled Roundup, $289 million in his case against Monsanto. The verdict was later reduced by the court to $78 million.

Glyphosate is the most heavily used herbicide in the world. People who are not farm workers or groundskeepers are being exposed to the cancer-causing chemical through food.

Two separate rounds of laboratory tests commissioned last year by EWG found glyphosate in nearly every sample of popular oat-based cereals and other oat-based food marketed to children. The brands in which glyphosate was detected included several cereals and breakfast bars made by General Mills and Quaker.