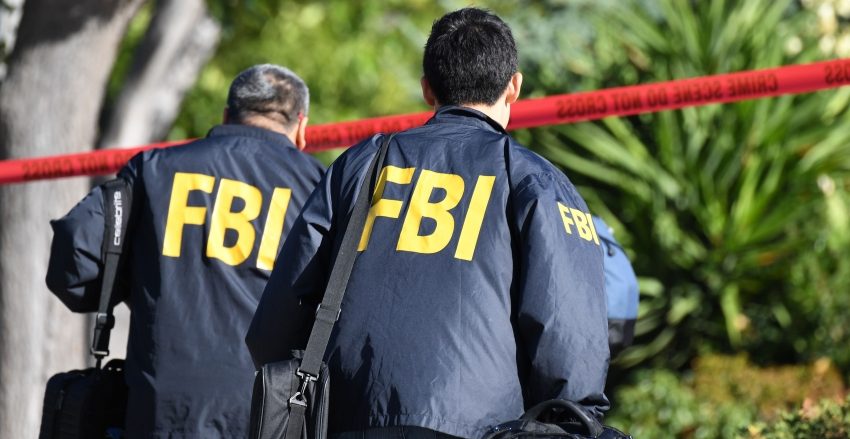 The FBI is a racist institution with sweeping powers. Giving it more resources to fight “domestic terrorism” will only make things worse.

On August 3, a white supremacist attacked a Walmart in El Paso, Texas, killing at least 22 and wounding dozens more. Espousing racist conspiracy theories about a “Hispanic invasion,” the killer’s murderous rampage was cold-blooded—and appeared to target Latinx people. It’s only the latest high-profile act of white supremacist violence. And it comes at a time when Donald Trump and other Republican politicians are mainstreaming racist rhetoric.

Faced with this climate, many well-meaning people are looking for a way to counter the very real danger of white supremacist violence. Some Washington Post columnists, CNN guests, the FBI Agents Association and presidential hopeful Joe Biden are touting one particular “solution”: to create a new law countering “domestic terrorism.”

But this approach is misguided—and dangerous. First of all, the FBI is not an ally in the fight against racism. It has, in fact, often thwarted racial justice advocates and continues to be defined by deep-seated institutional racism. With many activists rejecting the carceral state or counterterrorism framework, and embracing police and prison abolition, whether a law enforcement agency can ever counter white supremacy is a subject of debate.

What is extremely clear is that the FBI has extraordinary tools at its disposal. It operates under the loosest guidelines at any point since the post-Hoover era reforms. These current guidelines allow the FBI to investigate an individual without any factual predi­cate that the person has committed a crime or poses a threat to national security. The FBI is allowed to attend public meetings without disclosing its participation. The FBI has conducted counterterrorism investigations into nonviolent leftwing groups, including civil rights organizations. In other words, the FBI is hardly powerless to investigate and surveil activities it labels “domestic terrorism.” The FBI’s history of abuse, in fact, raises a troubling likelihood: A domestic terrorism law would almost certainly be used to silence leftwing dissent.

In addition to having the power to investigate domestic terrorism, the FBI also has plenty of statutes it can rely on. While it is true that “domestic terrorism” is not a stand-alone offense under U.S. law, neither is “international terrorism.” It is a crime to provide material support to a State-Department-designated “Foreign Terrorist Organization”—a statute frequently invoked by those claiming the FBI is powerless to fight domestic terrorism.

There also exists a highly specific domestic terrorism law, which illustrates how such legislation can be designed specifically to thwart dissent. Congress passed the Animal Enterprise Terrorism Act, which makes it illegal to damage or interfere with an animal enterprise causing it to lose profits. This law has been used to prosecute animal rights activists who free mink destined to be slaughtered on commercial fur farms.

Making up the rules

In order to understand how the FBI conducts investigations, it’s important to realize that the Bureau plays by its own rules. There is no charter from Congress defining how much evidence is required for the FBI to open an investigation. While some of the most intrusive surveillance techniques, like wiretaps or national security letters, are regulated by statute, Congress has little else to say about when and why the FBI can use specific investigatory techniques. Although a statute authorizes the FBI to investigate crime, many of its national security powers instead come from executive orders. For the last four decades, the questions of when, why and how the FBI conducts investigations have been largely regulated by the Attorney General. While this move was ostensibly intended as a reform, leaving such authority to the Attorney General has allowed for a gradual expansion of FBI powers.

In the mid-1970s, the public, the media, Congress and even the Comptroller General of the United States, began to scrutinize the FBI’s use of its domestic intelligence authorities to surveil and even disrupt lawful, political activity. As part of an effort to rein in the FBI’s political surveillance and stave off public criticism, in 1976 Attorney General Edward H. Levi issued guidelines to regulate the FBI’s investigatory powers. Levi’s guidelines have since been succeeded by new guidelines promulgated by subsequent Attorneys General. However, the Attorney General Guidelines remain the main mechanism for defining and regulating the scope of the FBI’s authorities.

When it comes to spying on dissent, the FBI is remarkably resourceful and inventive—and it has used its powers to violate civil liberties in foreign terrorism cases to crack down domestically. Take, for example, the FBI’s surveillance of opponents of Ronald Reagan’s Central American policy. In the 1980s, the FBI surveilled the Committee in Solidarity with the People of El Salvador’s (CISPES). Even though CISPES was a domestic group, involved in domestic political activity, and the investigation took place entirely in the U.S., the FBI argued that CISPES might be connected to armed groups in El Salvador’s civil war. As a result, the FBI classified its investigation as an international terrorism investigation and used the looser guidelines (no connection to terrorism was ever discovered).

Attorney General William French Smith under Ronald Reagan and Attorney General John Ashcroft under George W. Bush both rewrote the guidelines to make them significantly less protective of civil liberties. The most dramatic changes came in 2008, when in the waning months of the Bush Administration, Attorney General Michael Mukasey created radically new guidelines—which remain in place today. Explicitly arguing for the need to “eliminate the remnants of the old ‘wall’ between foreign intelligence and domestic law enforcement,” Mukasey issued a unitary set of guidelines for general crime, national security and foreign counterintelligence operations. Thus, the FBI agents no longer operated under differing standards for opening and carrying out domestic terrorism versus international terrorism investigations. (The internal structure of the FBI has also been reorganized since the reforms of the 1970s. Both international and domestic terrorism are now handled by the Counterterrorism Division, which is part of the FBI’s National Security Branch.)

In addition to the current loose standards for opening an investigation in general, the FBI’s own domestic terrorism investigations show how easily the agency manipulates the term, in stark contrast to those who say the FBI lacks enough authority. Using its domestic terrorism authorities, the FBI has surveilled both Occupy Wall Street and the School of Americas Watch, even though it acknowledged both groups were nonviolent or had peaceful intentions. The FBI reasoned that a future, hypothetical “lone offender” or “militant group” could infiltrate the movements to carry out unspecified threats. The FBI’s domestic terrorism investigation of School of the Americas Watch carried on for 10 years. A 2010 Department of Justice Office of the Inspector General (OIG) report looked at FBI monitoring of domestic advocacy groups from 2001 to 2006, including PETA, Greenpeace and the Catholic Worker movement.

One of the terrorism investigations reviewed involved a 2003 incident where an alleged member of the Catholic Worker movement smashed a glass window and threw red paint at a military recruitment station. An email claiming responsibility stated the act was carried out “on behalf of the people of Iraq who suffered under Saddam Hussein and now suffer under the United States.” The OIG decided that since the act involved a “use of force or violence” (throwing red paint and smashing window) to achieve a political goal it, was—under FBI policy—proper to investigate it as domestic terrorism.

The OIG made a similar conclusion about a 2004 act of civil disobedience at a military recruitment station, determining that protesters spilling blood on the walls, an American flag and pictures constituted a use of force or violence for political ends.

The FBI is hardly hamstrung in investigating domestic terrorism. Instead, the FBI has overly broad powers that it routinely relies on to surveil dissent.

That the FBI would respond to an incident of white supremacist violence by investigating the victims as terrorists doesn’t merely illustrate how the FBI doesn’t need any new powers to investigate terrorism. It illustrates how the FBI uses those powers to police political activism and has a deep-seated problem with institutional racism.

The Bamn investigation is part of a much larger picture. The FBI issued an outrageous and baseless intelligence assessment in August of 2017 on the threat of “Black Identity Extremism.” According to this analysis, African-American perceptions of racism are likely to lead to violence against police officers. By treating opposition to racism as a precursor to violence, this analysis is inherently criminalizing of Black dissent. Former FBI Director James Comey publicly touted the Ferguson Effect, an entirely debunked theory arguing that protests against police brutality lead to an uptick of crime. Historically, while the FBI had tasked informants with infiltrating and disrupting the Ku Klux Klan, it knew in advance about planned violence against the Freedom Riders and took no action.

Hatem Abudayyeh is the executive director of the Arab American Action Network, a social justice organization based in Chicago. He tells In These Times, “If more funding goes to the feds, that expansion of the state is going to go after us. It’s going to come down on our communities—Arab, Muslim, Latinx, Black, Native—all the social justice organizers around the country who come under attack by law enforcement because we’re resisting Trump’s policies and trying to build a better world.”

Abudayyeh has reason to be concerned. Donald Trump has tweeted that Antifa should be labeled a terrorist organization, and Ted Cruz has sponsored a nonbinding resolution urging that Antifa be declared a domestic terrorism organization. Antifa, which is short for Anti-Fascism, is an ideology, not the name of an organization. Further, technically speaking, no mechanism exists to classify domestic groups as terrorist organizations. The Obama Administration cited this when responding to a WhiteHouse.Org petition urging it to classify Black Lives Matter as a terrorist organization. While this may not be a statutory designation, politicians and law enforcement conflating political movements with terrorism is far from harmless. It demonizes these movements, greenlights repression, and chills people from engaging in protected political activity for fear of being associated with terrorism. In the past, when the FBI declared animal rights and eco-terrorists the number one domestic terrorist threat, this contributed to a climate of repression, surveillance and aggressive prosecution.

White supremacist violence is real. It threatens some of the most vulnerable communities amongst us. But expanding the powers of the FBI or creating a new domestic terrorism law is not a solution. Contrary to the handwringing of cable news guests, reviews of existing statues or the FBI’s own domestic terrorism investigations show the claim that the FBI is lacking in powers is patently false. New laws aren’t only unnecessary, they would be actively harmful. The FBI has a long history of acting as the political police, including against civil rights groups. A new domestic terrorism law will only be used further repress these groups.

In the words of Fatema Ahmad, deputy director of the Muslim Justice League, a civil rights organization, “We need to get serious about addressing violence by starting at the root causes, like white supremacy, rather than attempting to predict individual instances or expanding the power of institutions that have long upheld white supremacy.”