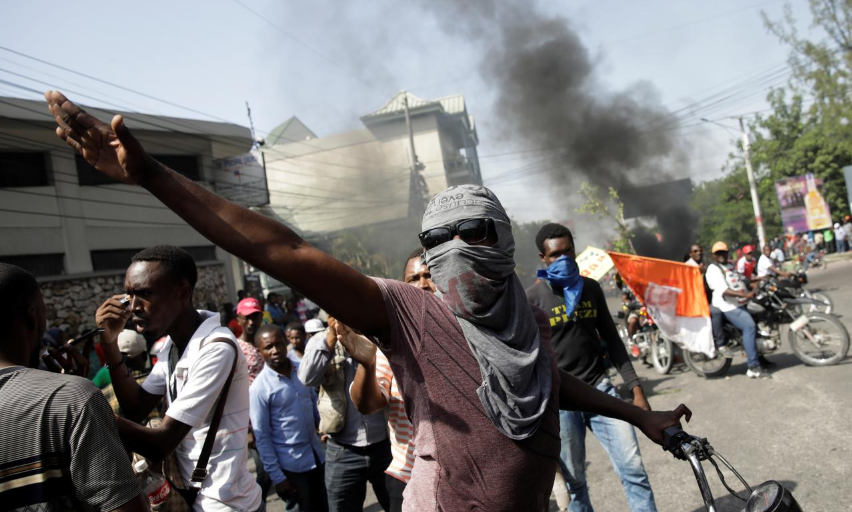 Above Photo: A demonstrator gestures during a protest to demand the resignation of Haitian president Jovenel Moise, in the streets of Port-au-Prince, Haiti October 11, 2019. REUTERS/Andres Martinez Casares

PORT-AU-PRINCE (Reuters) – Haiti, the poorest country in the Americas, has been rocked by violent protests in the last month that have led schools, public offices and businesses to close and forced non-governmental organizations to suspend aid distribution.

Opposition leaders and their supporters in the nation of 11 million are calling for the resignation of President Jovenel Moise, 51, amid anger over fuel and food shortages, a steep currency devaluation and corruption allegations.

This is the longest stretch of demonstrations against Moise since they broke out last year. At least 17 people have been killed and 189 injured, according to Haiti’s National Network for the Defense of Human Rights.

The following explains the causes of the crisis as well as possible outcomes:

WHAT SPARKED THIS BOUT OF PROTESTS?

Haitians are angry at fuel shortages since the collapse of the PetroCaribe program under which Venezuela for a decade offered aid and cheap financing to several Caribbean nations to buy its gasoline, diesel and other products.

The cash-strapped country has struggled to import enough at market prices. Gas stations are regularly out of fuel for days at a time and blackouts increasingly common.

The shortages plus government attempts to reduce fuel subsidies have caused prices to soar, exacerbating an already dire economic situation.

More than half of the population lives below the poverty line, surviving on less than 2.4 U.S. dollars a day, according to the World Bank.

“The days of lockdown have paralyzed the economic activity and made it worse,” Haitian economist Etzer Emile said.

“But at the end the main concern is that the government is not able to give an appropriate response. The country is out of control.”

Allegations in a report by the Superior Court of Auditors of the embezzlement of billions of dollars by public officials and those close to them, including Moise before he became president, have also sparked ire.

The PetroCaribe program included a fund for infrastructure and social projects in member countries. Opposition politicians say no serious projects were ever completed.

Moise, whom some opposition members accuse of buying votes in parliament for his prime minister nominees, has denied any wrongdoing, but his government has failed to investigate further.

Haiti has struggled to achieve political stability since a popular uprising in 1986 ended 28 years of dynastic dictatorship by Francois “Papa Doc” Duvalier and his son Jean-Claude “Baby Doc” Duvalier.

The last few decades have been marked by coups, unrest and foreign interventions.

Only two presidents have managed to serve their entire term.

Haiti has not had a government since March as Moise has been unable to get the opposition on board with his nominations.

Successive governments have failed to spark real development in the island nation that has to regularly contend with deadly natural disasters from hurricanes to earthquakes.

The country had received much aid in the wake of the 2010 quake that killed around 300,000, but that has tapered off of late. Moise, however, has not cut expenses, meaning the budget deficit has deepened to record levels, according to Haitian economist Kesner Pharel.

The local currency has depreciated around 30 percent against the dollar in the last year and inflation is running at around 20 percent, he said. Haiti’s main source of hard currency is remittances.

Around half of the population was undernourished last year, according to the United Nations, while swathes of the country do not have access to electricity, basic sanitation or healthcare.

As a result, many Haitians have lost faith in politics. Only 21 percent of the electorate turned out for the last presidential election in 2016.

Opposition politicians say that fact undermines the legitimacy of the presidency of Moise, a former businessman with little prior political experience.

But they have themselves failed to get voters out to polling booths, instead resorting to disrupting parliament and calling for street protests, making Haiti hard to govern.

HOW HAS THE GOVERNMENT RESPONDED?

Moise, who has two years left in his term, has taken few public steps to address peoples’ grievances since protests first broke out a year ago.

He has also not spoken in public since the beginning of this latest round of protests, sparking accusations of a leadership vacuum.

The president first addressed the nation two weeks into the riots, in a pre-recorded speech broadcast on television at 2 a.m. in which he made a plea for dialogue and unity.

This week he named a commission of seven politicians from his own party or allied with it to lead discussions to find a solution to end the crisis.

WHAT IS THE OPPOSITION’S STANCE?

The so-called radical opposition, which is spearheading the protests, says the time for dialogue has passed, making it clear it will continue to call for protests until Moise resigns.

On Oct. 1 it created a nine-member commission to oversee an orderly transition of power.

Even some politicians and sectors of society like the business community who had previously backed Moise are beginning to question his capacity to lead Haiti out of its current crisis.

The leader of the Senate, Carl Murat Cantave, who is from a different party but claims to be neutral, appealed to him in a speech this week to put “all options on the table”, including that of shortening his mandate to make way for a new president.

“Surpass yourself,” he said, “so that Haiti can rise up again from its ashes and do better.”