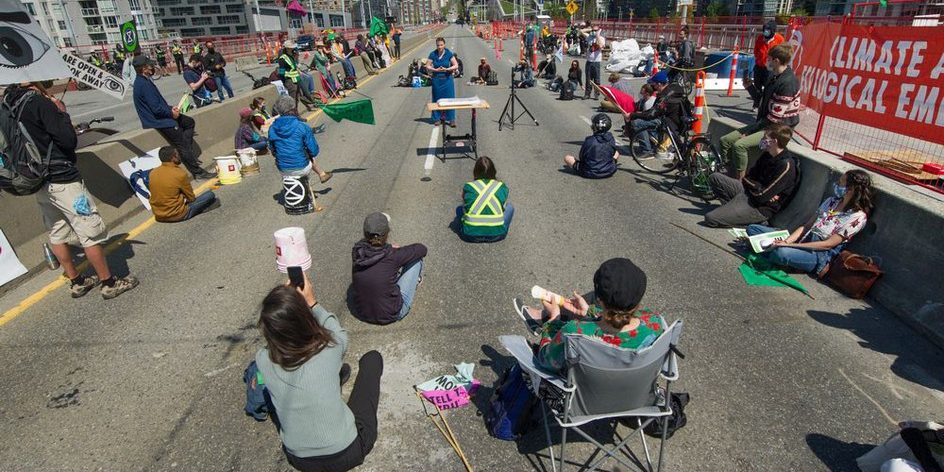 Above Photo: The local chapter of Extinction Rebellion occupied the Granville Street Bridge in Vancouver on May 2, 2021. Arlen Redekop.

The protest group says it will occupy major intersections, bridges and shut down Vancouver International Airport.

Climate protesters are planning a series of protests in Vancouver this month that includes occupying major intersections, bridges, and “shutting down” Vancouver International Airport.

If this demand isn’t met, Extinction Rebellion plans to initiate what it is calling the October Rebellion, a two-week campaign of mass civil disobedience in Vancouver starting Oct. 16.

“We are going to be arrested in the streets,” said Extinction Rebellion member Brent Eichler. “(Trudeau) is going to face the embarrassment of not just telling world leaders why he has failed on the promises he has made, but why citizens of his own country are sitting on the streets and being arrested because he won’t act.”

Protesters will be non-violent, but they also won’t be afraid of arrests, said Eichler.

Protests are planned for major intersections including Burrard and Georgia streets and Broadway and Commercial, as well as the Burrard Street and Cambie Street bridges.

A protest is planned for Oct. 25 to shut down access to Vancouver International Airport.

Eichler said he recognizes the planned protests could be disruptive, but “strong action” is needed to get politicians to act.

“Our goal is to fill the jails with our bodies until government act,” he said. “We are sorry if people’s lives are disrupted, but there is no other way to do this.”