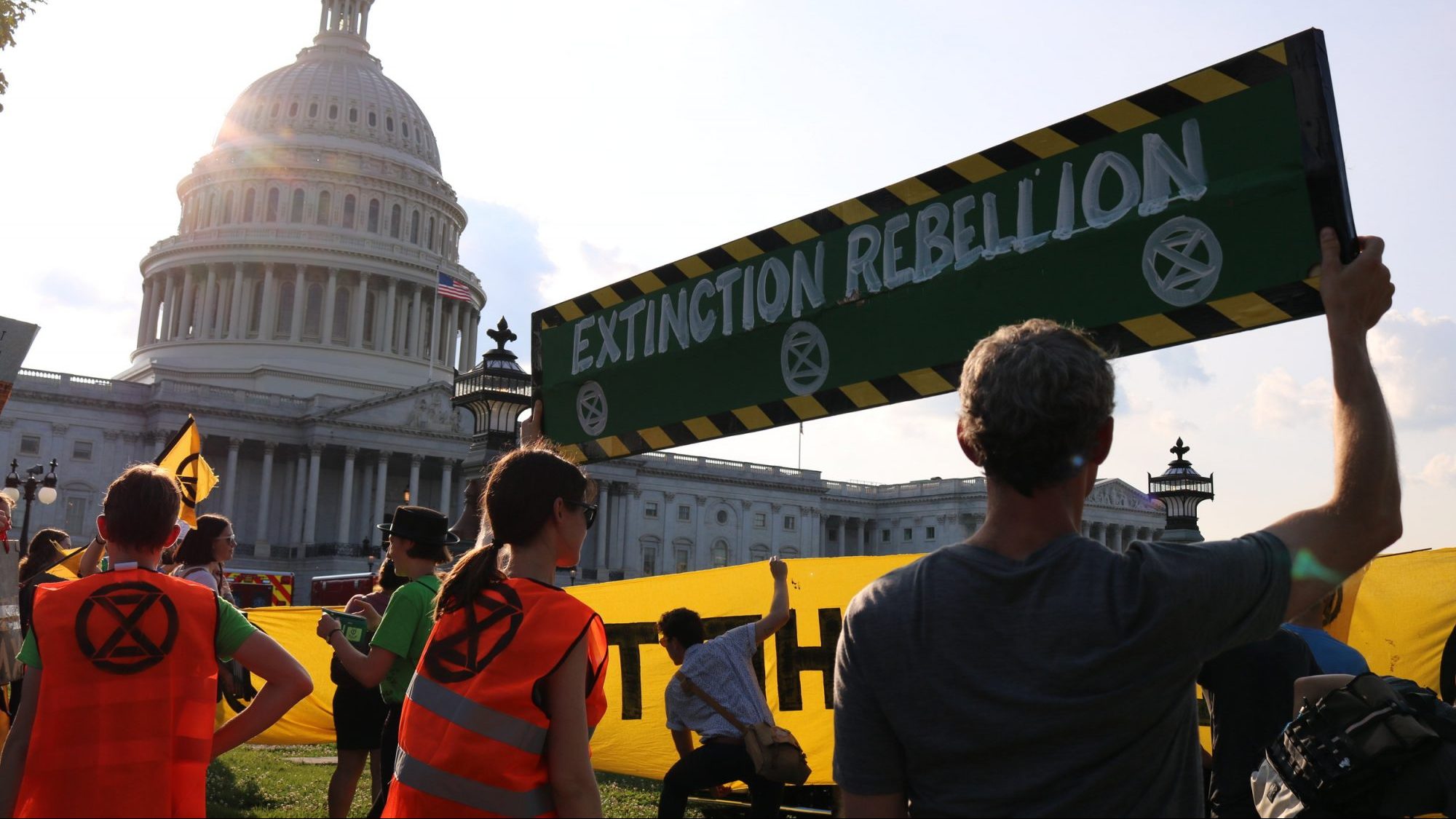 Extinction Rebellion Marches On The Capital

Above photo: By Drew Larsen.

Washington, DC, July 9 – Around 100 people representing the climate group Extinction Rebellion marched unpermitted for one mile from the Spirit of Justice Park to the east side of the Capitol grounds. The march took place after the crowd held a People’s Congress to pass the resolution calling for the declaration of a climate emergency. What started out as a mild presence by the Capitol Police quickly escalated as the activists left the park and headed toward the Capitol building.

As the march turned onto Independence Avenue, the full extent of the police force gathered to address the protest came into view. A caravan of large police vans, including wagons meant to house arrested activists, lined the block of Independence and First Street SW to Independence & First Street SE (about a half mile long). Over 10 policemen on motorbikes accompanied the vans, in addition to several police on foot. When asked, one officer claimed the barricade was for the safety of the pedestrians in the rally, from entering into the road and being harmed by oncoming traffic.

Upon attempting to use sidewalk chalk to write, “We’ll be back,” protester Dominic Serino was immediately detained. Police ordered the crowd to vacate the area. Amidst shouts of “Let him go!” and “Shame!” Serino was released. He had travelled from Baltimore to participate in the rally.

“I’m here because I have seen that what traditional environmental NGOs do to address climate change isn’t working,” he said.

USA – Extinction Rebellion DC welcomes the news that Representatives Blumenauer and Ocasio-Cortez and Senator Sanders will be introducing a resolution declaring a climate emergency. Telling the truth about the climate emergency is a crucial first step to address the crisis with the gravity it deserves.

Extinction Rebellion DC will be mobilizing in response to this announcement today at 5PM starting at Spirit of Justice park. At the event we plan to celebrate the initiative of these select Congress people and to reiterate our demand that the rest of Congress acknowledge the severity of the climate crisis by quickly codifying the resolution into law. We invite the sponsors of the resolution and other Members of Congress prepared to take action to address the climate emergency to join us.

If Congress fails to take action quickly to declare a climate emergency, Extinction Rebellion is prepared to use escalating nonviolent disruptive action to apply pressure to Congress. There can be no business-as-usual until our leaders take meaningful action to address this climate emergency.

Poll after poll affirms broad public concern about climate change in the US. We will gather to remind members of Congress of their duty to protect their constituents and take swift action to address this emergency. The situation facing our planet becomes more and more dire with every ton of greenhouse gases released into the atmosphere. Instead of remaining complicit in worsening the effects of climate change, members of Congress in both the House and Senate must respond to this resolution with the urgency and support that this moment demands.