Above Photo: From heraldscotland.com

ENVIRONMENTAL activists have stepped up their campaign to draw attention to the dangers of climate change by marching blue paint footsteps across Glasgow‘s famous George Square.

The protest is part of a strategy of civil disobedience that aims to pressure the local authority into declaring a climate emergency.

The group say the blue footprints symbolise the necessity of taking to the streets to demand radical action, and the dangers Glasgow and the Clyde region face due to sea-level rise.

Activists with blue paint on their shoes or feet left footprints up to the entrance of the City Chambers, after blocking traffic on the street in front with a banner that read: “We delay you for 5 minutes. The government has delayed for 30 years. Declare a climate emergency.”

Extinction Rebellion hope to show through their footprints that public space can be reclaimed as a place of popular creativity, where people can come together to announce and work through the collective hazards they face.

An Extinction Rebellion Glasgow spokesman said: “Our footprints denounce the secrecy, lies and shallow morality of our local government.

“Glasgow, its streets and our passage through them, will eventually be flooded because of the inaction of politicians.

“Our aim is to directly confront the Council, assigning responsibility for flood damage not onto individuals, but onto our system of corporate bought governance that needs to be dismantled and recreated to protect our common future.” 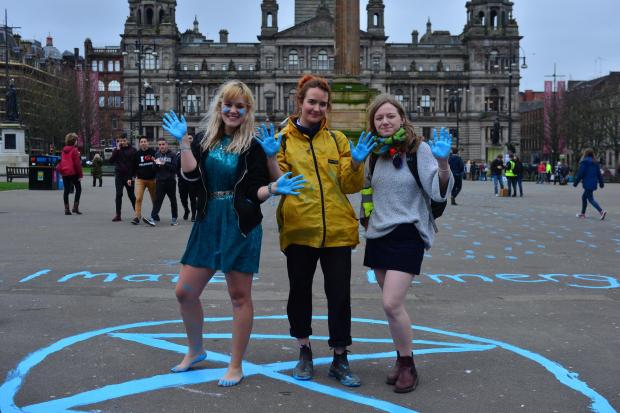 The spokesman added: “Our governments serve the interests of fossil-fuel companies, not the people; who they not only fails to represent, but, during our era of coalescing crises (ecological, austerity, anti-migrant), fail to keep alive. When people’s lives are not taken seriously, authority should not be either.”

On lamp-posts around the square, the activists affixed signs of suited men and police cracking batons reading: “Solidarity begins when you realise the state has forgotten you and capital has forgotten everything. The Clyde is rising.”

A spokesman for Glasgow City Council said: “The council has already established a Climate Emergency Working Group – which the Extinction Rebellion protestors sit on.

“That is a clear recognition of the seriousness with which it approaches the recent IPCC report and an acknowledgement of the enormity of the potential risks facing Glasgow and the wider Clyde Valley area as a consequence of climate change.

“Given that, it’s extremely hard to see what is achieved by daubing streets and buildings with paint, beyond the city having to pay to clear it up.”