Extinction Rebellion Protests Stop Business As Usual Across The Planet 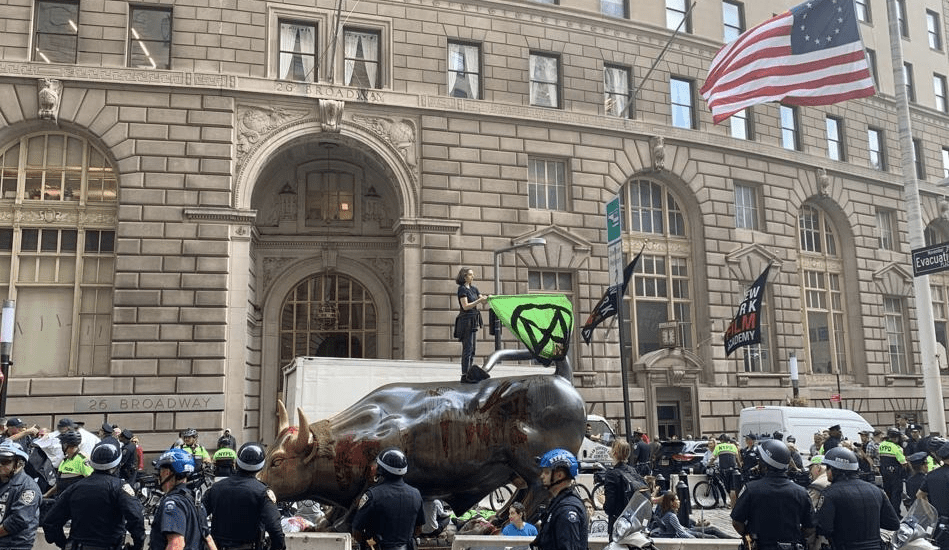 The newest climate crisis campaign of Extinction Rebellion, called “International Rebellion,” has begun. On October 7,  Extinction Rebellion began two weeks of disruptions intended to show governments that citizens are not satisfied with their lack of actions to curb climate change and protect wild species.

Across the globe, activists blocked roads and staged demonstrations in big cities on Monday, part of a wide-ranging series of protests demanding much more urgent action against climate change. Associated Press reported that “Demonstrators stopped traffic in European cities including Berlin, London, Paris and Amsterdam. In New York, activists smeared themselves — and emblems of Wall Street — in fake blood and lay in the street. In some cities, activists chained themselves to vehicles or pitched tent camps and vowed not to budge.”

The Climate News Network reported police protected 10 Downing Street but did not stop XR from blocking streets. They wrote, “Handing out leaflets entitled: ‘It’s time to tell the truth’, the protestors stressed their key message: ‘We are in trouble. Sea levels are rising. Heatwaves are killing crops. The Arctic is melting, and Africa and the Amazon are on fire.'” People carried “homemade placards: ‘Choose Extinction or Rebellion’, ‘We can’t eat money, we can’t drink oil’, ‘Mars for the Privileged, Earth for the Poor’, and ‘We must rise before the tides.’” 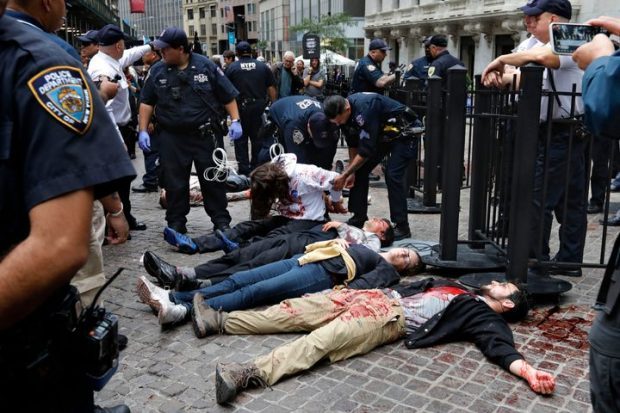 Wall Street was a target of protests because investors are funding fossil fuel infrastructure and profiting from the continued use of fossil fuels even though they know it is destroying the planet. AP described the Wall Street protest writing, “In New York City, protesters doused a famous statue of a charging bull near Wall Street with fake blood. One protester waving a green flag climbed on top of the bull. Other activists splashed with red dye staged a ‘die-in’ in front of the New York Stock Exchange — lying down as if dead while tourists gawked.” 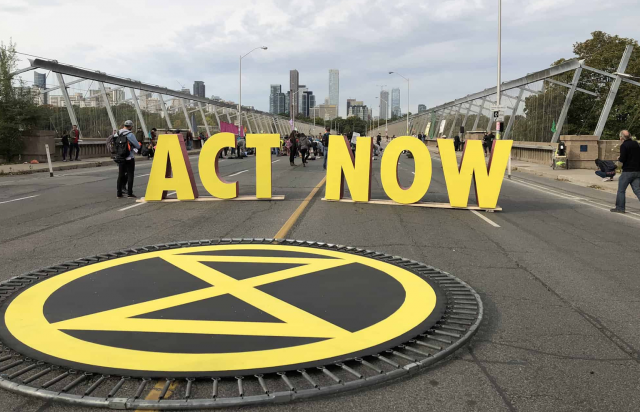 Extinction Rebellion was founded in England last year and has chapters in some 50 countries. The group said the protests Monday were taking place in 60 cities worldwide in countries including Turkey, Canada, South Africa, and Mexico. This morning, in a newsletter Extinction Rebellion wrote:

It’s happening. It can’t be ignored. It’s only growing stronger.

We’re back on the roads – with as much joy, fear, love and courage as ever. We’re shutting down cities – not because it’s fun (though it can be), but because it’s our last option for stopping this toxic system in its tracks.

Our world is dying. To save it, we’ll need everyone – wherever and whoever you are – to do your bit.

And though we’re still somewhat short of the shared, global consciousness we need, we’re getting ever closer.

This International Rebellion which began on Monday is so vast it’s almost impossible to take it all in. Thousands of people flood 60 cities across the globe, with over 700 brave rebels arrested as they stand up for their right to life, and that’s just the start.

In their newsletter, they highlighted some of the cities writing, “the 11 vibrant sites held around the centre of London, the choir of Amsterdam rebels, the blood poured on the bull statue in Wall Street in New York, the ambition of our banner-hangers, the Red Brigade arriving in Tel Aviv and Istanbul, underwater protest art in Mexico, and the boats of every shape and size that we are so desperately trying to keep afloat.” The newsletter went on to highlight cities in every continent. Below are tweets showing actions around the world.

Here is how to get involved with Extinction Rebellion.

take to the streets on six continents, united in joyous, nonviolent rebellion against criminal inaction on the climate and ecological emergency.

Extinction or Rebellion Banner in London

Young people are in the streets of Chicago demanding action on climate change. |#ExtinctionRebellion pic.twitter.com/7wHYKvkNcm

pictures from our action today. It was so wonderful to be led by staunch First Nations custodians, the very original folk doing direct action on this continent. They shared stories of resistance going back to colonisation #ExtinctionRebellion #perth #boorloo #JusticeforJoyce pic.twitter.com/lNFe9Rt2Iv

Arrests on Bridge in London

These #ExtinctionRebellion activists being arrested are heroes.

History will judge them kindly, & favourably, for their stand in trying to save our planet.

An inconvenience today- in order to make people pay attention- will give us all more tomorrows.pic.twitter.com/vsvvjfMlbv

Under the memorial to the women of world war two, women & men now take part in the fight of our lives 🥀

There is no greater struggle in our lives than against inaction and climate denial.

Few, but we know that if we lose, we lose everything.#RebelForLife #ExtinctionRebellion pic.twitter.com/Rj2UJ8iFNT

Solidarity with #ExtinctionRebellion
and everyone fighting for the future of our planet.

Our survival is more important than short-term profit made by a tiny minority of the population.

Our governments must act now – and we must force them to act. pic.twitter.com/tQ9DhVxR7f

Setting up camps in streets around Westminster

Protestors from #ExtinctionRebellion setting up camp all along the road from Westminster Bridge to Lambeth Bridge. Never seen anything like it. pic.twitter.com/8qtl0g9C1V

THE FUTURE IS HERE!

Link between climate and war highlighted in this London protest

Linked to a mock Trident Missile to block streets

XRpeace activists are locked on to a mock Trident missile outside Ministry of Defence saying #Scraptrident and use resources to address #ClimateChange #ExtinctionRebellion pic.twitter.com/2P5Fi68ClK

Tell the truth! Wees eerlijk! Blockade #ExtinctionRebellion in Amsterdam is a fact! We are here to stay to #RebelForLife pic.twitter.com/6M6nH9UKT2

Are we gonna fight for it? Yes! Are we gonna get it? Yes! #ClimateJustice #RebelWithoutBorders #ExtinctionRebellion Amsterdam rocks. #RebelForLife #ClimateCrisis pic.twitter.com/uZRn2FQfId

If you are responsible for maintaining an unsustainable system .. think again.
How long can we afford this path to destruction?#ExtinctionRebellion at Rijksmuseum Amsterdam pic.twitter.com/vkxO9tYsZt

Parents protested for their children.

“I’m just a father of two children that’s very frightened of their future.”

As police attempt to remove #ExtinctionRebellion activists, one protestor bursts into tears while chained to a car. pic.twitter.com/aTblAaXUYG

We are currently marching across Meanjin / Brisbane in solidarity with first nation peoples. We’ll be arriving in Queens Gardens shortly – see you there!

Melbourne’s Rebel Kitchen is off to a flying start. We’re making three vegan meals a day for our Extinction Rebellion campers – because looking after each other is key to a regenerative culture and effective campaigns. #ExtinctionRebellion pic.twitter.com/9zqgFxSVb9

This is my 74-year-old mother Brenda. Until recently she’d never been to ANY protest. Now she’s an #ExtinctionRebellion activist, fighting for the future of her grandkids. If she can do it YOU CAN DO IT. Spring Rebellion starts tomorrow. We are the people we’ve been waiting for. pic.twitter.com/tardH05h5d