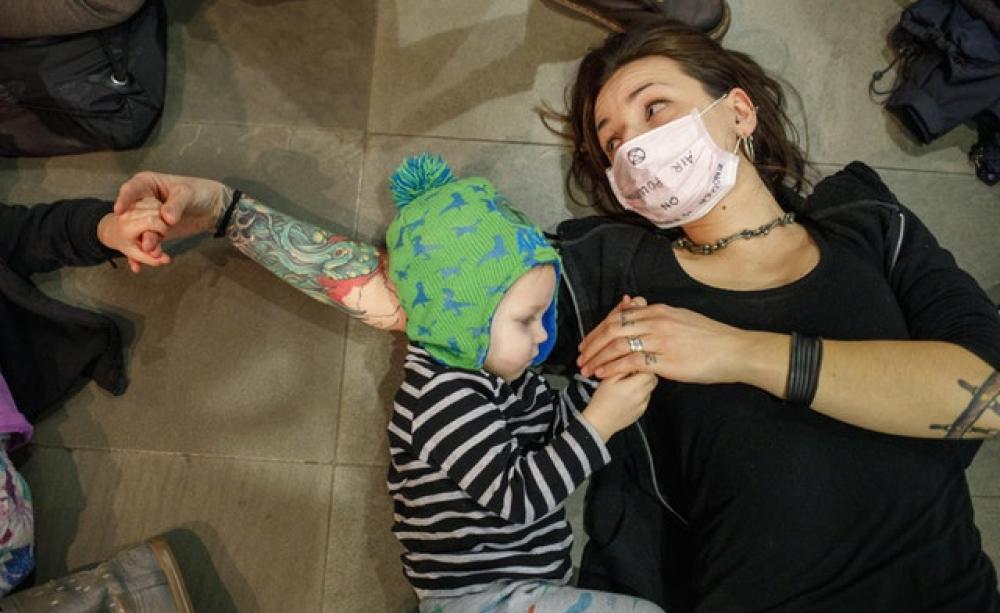 Protesters, including children as young as two, staged the peaceful demonstration at the Making The Modern World gallery in the Science Museum.

London – Children and families have held a die-in at the Science Museum in an Extinction Rebellion protest against air pollution.

Protesters, including children as young as two, staged the peaceful demonstration at the Making The Modern World gallery in the central London museum on Thursday morning.

The group lay on the floor for 20 minutes wearing bespoke gas masks reading Enough Is Enough On Air Pollution on and holding signs referencing the impact on children’s health including poor lung development.

Other signs quoted the government’s figures on air pollution in London, which found there are around 9,400 excess deaths in the capital due to long term exposure to particulates and harmful gasses.

Extinction Rebellion has said the Science Museum was chosen as the target of the demonstration because of its relationship with fossil fuel company sponsors including BP.

Juliana Westcott, a mother of two from Lewisham, said: “I want my children, two and four years old, to be able to grow up in this amazing city without this meaning that I am putting their health at risk.

“We don’t want to leave the city, our lives are here in London, but it breaks my heart to know that when I go back home today, their lungs will be full with so much pollution from what was just supposed to be a fun family day out in a museum.”

The bespoke masks worn by the children were made by artists including fashion designer Bella Freud, Turner Prize winner Jeremy Deller and sculptor Gavin Turk.

The masks were donated by the acclaimed artists and will be auctioned later this year, with the proceeds distributed between Extinction Rebellion and other anti-air pollution groups.

Miranda Irwin, a mother of two and teacher, said: “Air pollution is a social justice issue.

“It’s silently poisoning our children and the poorest and most vulnerable in our society have no choice but to live and breathe in the worst affected areas.”

Thursday’s protest comes after 1,500 people from the group BP or Not BP protested at the British Museum over the energy company’s sponsorship of a Troy exhibition earlier this month.

Several institutions including theatres and universities have split from their links to fossil fuel companies following criticism.

The University of Bristol announced on Thursday that it had ended all its investments in fossil fuel companies after declaring a climate emergency in 2018.

This followed the Royal Shakespeare Company’s decision to end its relationship with BP earlier the same month after high-profile opposition to fossil fuel sponsorship.