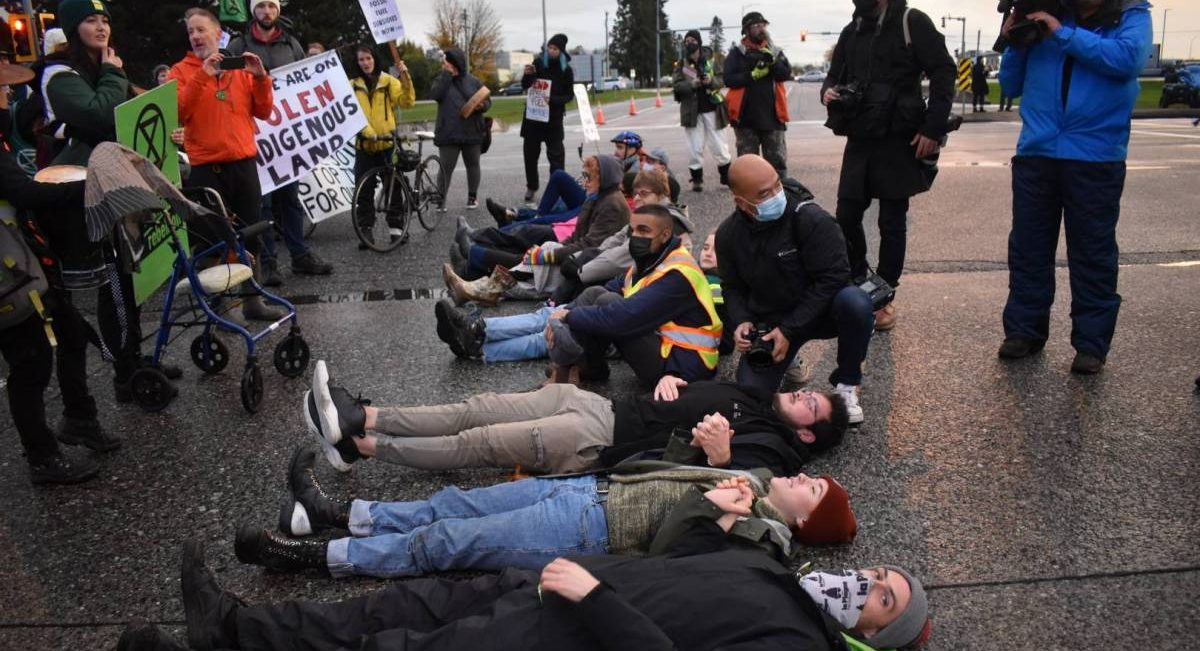 Halted traffic to the airport.

The tactic worked, but will it lead to substantive changes in the way the climate breakdown is being covered?

Canada – A group of climate activists tied up traffic last night (October 25) on the main road to Vancouver International Airport.

According to Extinction Rebellion, 18 were arrested; that differed from a tweet from Richmond RCMP, which said that 20 were arrested.

Regardless of the numbers, the tactic seems to have worked: Extinction Rebellion Vancouver spokesperson Zain Haq finally received some airtime on CBC Radio One to explain why the group has launched a 14-day campaign of peaceful civil disobedience.

The group’s “October rebellion” is intended to spark a nationwide discussion about fossil-fuel subsidies. These “incentives” reached $18 billion last year at the federal level according to Environmental Defence.

But that nationwide discussion hasn’t happened to date. That’s due to a near-media blackout on discussing why Extinction Rebellion Vancouver protesters have taken to the streets this month in advance of the COP26 international climate meeting.

CBC has been better than most. Its local meteorologist, Johanna Wagstaffe, has been among the very best in the mainstream media in educating the public about this issue.

One of Extinction Rebelllion Vancouver’s spokespeople, Sara Hall, recently acknowledged to the Straight that CBC’s climate coverage seems to have improved somewhat over the past year.

But Hall maintained that it doesn’t go nearly far enough. Moreover, Hall insisted that telling hopeful stories about the future of the planet hasn’t resulted in people taking to the streets, which is what leads to real changes in society.

Civil disobedience was a central factor in women obtaining the vote; it ended colonial rule in India; it led to U.S. civil-rights legislation; it brought down Philippines president Ferdinand Marcos; it delivered antiretroviral medication to AIDS patients; and it’s at the centre of the Black Lives Matter movement.

How should the media cover the climate breakdown?

Last night, CBC TV ran another hopeful climate story about how people can improve their neighbourhood’s climate resiliency by paying attention to the tree canopy and the existence of bicycle lanes.

Wagstaffe was the reporter (naturally), and it included comments from one of Canada’s leading climate-adaptation experts, UBC professor emeritus Stephen Sheppard. This was cheerful, solution-oriented climate journalism at its best. It just might inspire some viewers to get more involved.

But at the back of my mind, I was also conscious of something Hall told me.

“People are complex and are motivated by different things, but one of XR’s key messages is that 30 years of telling hopeful stories about the future of the planet—30 years of NGOs sugar-coating the facts—hasn’t worked,” Hall declared. “This hasn’t helped get people into the streets.

“So we take a different approach—of facing the cold, hard truth. When faced with this truth, one is then forced to confront certain existential questions: what am I gonna do about it? How do I want to live my life? How do I want to feel when I look my kids/ grandkids in the eye and tell them about my actions? Etc. Things become pretty black and white at that point.”

I laid out the cold, hard truth of the climate breakdown in a recent article about Jennifer Abbott’s film, The Magnitude of All Things. This documentary, which will be at the Vancity Theatre starting October 29, also tells the truth about the climate crisis and the grief that this is generating.

In my article, I highlighted climate feedback loops, methane emissions, carbon escaping from the soil, the slowing of the jet streams, and the devastating forest fires not only in B.C. but in other parts of the world, including Siberia. Ultimately, it adds up to an apocalypse that’s happening below the radar of many media outlets—especially when you compare it to the hypercharged coverage of the COVID-19 emergency.

One of Extinction Rebellion Vancouver’s articulate and intelligent spokespeople, a man who calls himself Badger, also laid out the grim horrors at an October 9 news conference that the media ignored. He said that the status quo will inevitably lead to mass starvation and societal breakdown.

Sure, the media is covering the climate crisis. But are they doing it in a truly constructive manner that will help stave off extinction?

Extinction Rebellion Vancouver has thrown down the gauntlet. Its courageous, well-educated, and thoughtful volunteers continue to face arrest day after day in their efforts to save our species and many other species.

They deserve better from the Canadian media. It’s time for their spokespeople—whether it’s Zain Haq, Lauren Emberson, Badger, or Sara Hall—to be given far more space to tell their stories on talk shows, newscasts, and the op-ed pages of major newspapers

Let’s end the near-media blackout. For the sake of our children and our grandchildren.