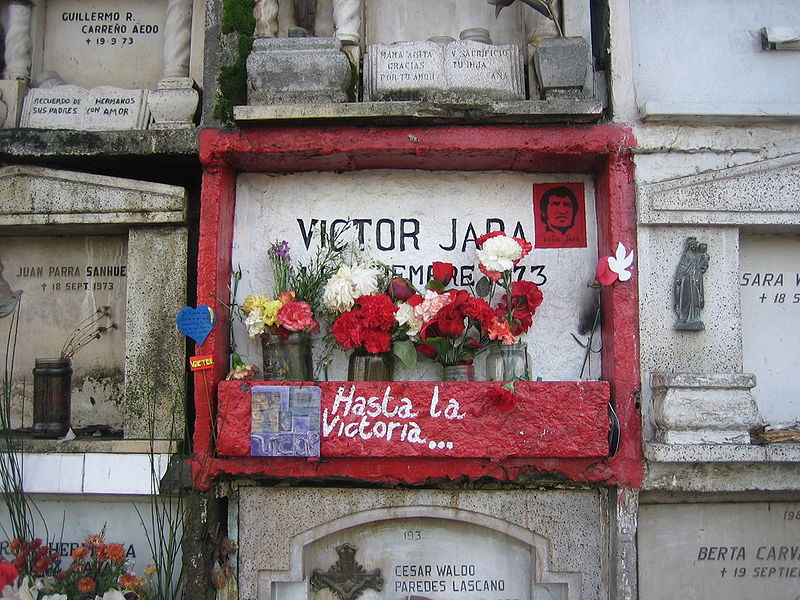 Extradition Sought For US Trained Murderer Of Chilean Singer

Above: Víctor Jara’s grave in the General Cemetery of Santiago. The note left reads: “‘Till Victory!”

On the 40th Anniversary of the U.S.-supported military coup in Chile, SOA Watch is calling for the extradition of Pedro Barrientos, a graduate of the U.S. Army School of the Americas, who currently lives in Florida in the United States.

Washington, DC –  September 11, 2013 marks the 40th anniversary of the U.S-backed military coup in Chile in which General Augusto Pinochet toppled the democratically elected President Salvador Allende. Among the dictatorship’s first victims was Victor Jara. He was killed on September 16, 1973. Victor Jara was an admired Chilean folksinger and one of the founders of a new genre of Latin American song. His body was dumped in the street and found with 44 bullets and signs of torture.

The coup began a 17-year repressive dictatorship during which thousands of people were murdered, disappeared and tortured by Chilean security forces. Many key actors involved in the systematic repression during the Pinochet dictatorship were trained at the School of the Americas (SOA), now known as the Western Hemisphere Institute for Security Cooperation (WHINSEC).

In December 2012, Chilean Judge Miguel Vásquez Plaza indicted 8 former Chilean military officers for the murder of Victor Jara, 4 of who are SOA graduates. Still at large is Pedro Barrientos, who currently lives in Deltona, Florida. The Chilean Court is awaiting a response from the United States on an extradition request was formally submitted in January 2013 so that he may stand trial for the murder of Victor Jara.

SOA Watch has set up an online action page, which has already generated over 7,000 messages to US government officials within only 24 hours, calling for the extradition of Barrientos to Chile.

SOA Watch organizer María Luisa Rosal states: “What this case reveals is the hypocrisy of the U.S. government, which claims to be a bastion and protector of democracy and human rights, but it is clear that the U.S. has actively endorsed and participated in violations of human rights throughout the Americas, as well as undermined democratic processes, as in the case of Chile. Justice for Victor Jara is essential in the struggle against impunity in Chile”.

SOA Watch is an independent organization that seeks to close the SOA/WHINSEC and to change U.S. foreign policy through vigils and fasts, demonstrations and nonviolent protest, as well as media and legislative work. This November 22-24, thousands will converge at the gates of the SOA/ WHINSEC at Fort Benning, Georgia, to commemorate those who have been killed by graduates of the school, and demand the closure of the institution.