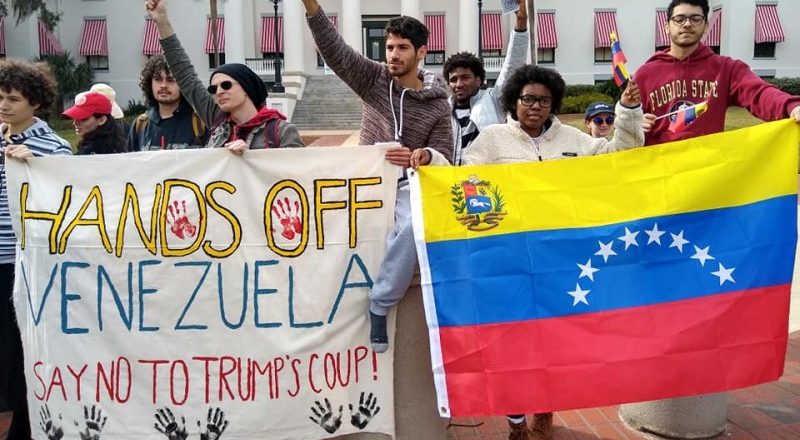 Extreme Right In Venezuela Seeks To Sabotage The Election

In a little more than three months, on December 6, parliamentary elections will be held in Venezuela.  The previous elections were on December 6, 2015 and the opposition gained a majority thanks to the abstention of 2 million Chavista voters who decided to stay home and not vote.

But the circumstances today are different, and supporters of the policies of Hugo Chavez are more united after having had to deal with an infinite number of political, economic and military attacks proceeding from U.S. imperialism and their local lackeys, attacks that intensified since the self-proclamation by Juan Guiadó that he was the president on November 23, 2019.

Due to this, the most extreme wing of the Venezuelan opposition, which forms the so-called G4 (that includes the parties Voluntad Popular of Leopoldo López, Primero Justicia of Henrique Capriles, Acción Democrática and Un Nuevo Tiempo) plans, with U.S. support, to boycott the electoral process and renew the mobilization in the streets.

Colombian sources with access to U.S. government functionaries and to leaders of the Venezuelan opposition became aware of a recent video conference meeting including members of the U.S. foreign affairs office ”virtual embassy” for Venezuela in Bogota (Venezuelan Affairs Unit or VAU) and several G4 opposition leaders headed by Leopoldo López, the President of  the Voluntad Popular Party. In this meeting they finalized plans and procedures to sabotage the December elections.

However, it springs to our attention that Juan Guaidó did not attend this meeting, and thus it appears that the main thrust and support of the U.S. is tilting toward someone with credentials of violence, such as the leader of the Voluntad Popular.

In this meeting, Leopoldo Lopez, who already has experience with organizing violent sabotage, asked each party in the G4 to recruit 100,000 volunteers, with the goal of mobilizing them earlier, but especially on Election Day, to cover all the polling places in the country.

The source, present at this videoconference meeting, revealed that, as Leopoldo Lopez explained, the volunteers should have the ability to manipulate and document real and supposed irregularities in the process, for example, the use of government resources by the PSUV and allied parties.  Other objectives are to show a low voter turnout, demonstrate violations by those forces carrying out Plan República, participate decisively in demobilizing the vote, and, a key aspect, to carry out protest and “civil resistance“ activities to slow the voting of supporters of the government and of those sectors of the opposition who favor dialogue and would make the new National Assembly appear legitimate.

The G4 will not participate in the electoral process, and, so their goal seems to be to document the problems created by their own interference, so that they may later try to convince the international community that it was undemocratic.  The challenge, however, is to convince the anti-Chavista forces of the wisdom of a strategy that will leave them out of the next National Assembly.

But the G4 leader went even further, proposing a goal more ambitious – 200,000 volunteers so that they would be able to have 25 activists at each polling place.  He suggested using a database of volunteers who participated in the failed “humanitarian aid“ operation attempted against Venezuela from Colombia in February 2019.

Richa Bhala, an official of the Venezuelan Affairs Unit in charge of counter-intelligence from her post as Vice-consul of the United States Embassy in Islamabad, Pakistan, accepted and praised this proposal, insisting on the need to broaden the base of the opposition platform.   Rafael Foley, head of the U.S. foreign affairs office “virtual embassy” for Venezuela in Bogota took the opportunity to insist that the G4 should convert from a more or less organized opposition to a structure of resistance and civil disobedience that goes beyond the four opposition political parties.

Seemingly, according to the same sources, soon there will be an appeal by the G4, seeking to add new forces to a new opposition platform.

If, as appears to be the case, the boycott strategy again is merged with one of violence, and the Guiadó effect is abandoned, since it turned out to be a bluff that simply united the Chavista forces, what we will see in the new opposition platform is the convergence of the same contradictions and aspirations of the traditional political parties, that have not been able to unite on anything other than their hate of Chavismo and their subordination to the United States.

In any case, December 6 is marked in red letters on the Venezuelan opposition’s schedule book, and they are seeking to take new steps to try to defeat Chavismo.

Whatever happens in the U.S. elections, since, even if Trump doesn’t win, the same interests that led Obama to sign an executive order declaring Venezuela to be a threat to the national security of the United States will still remain in power. In 2021 a new chapter in the Bolivarian and Chavista Revolution will begin, while still defending the oil and the national sovereignty.