Extremists Are Among Those Fomenting Violence In Twin Cities

On his way home from a protest Friday night in Minneapolis, Jonathan Turner Bargen encountered a white man in a red pickup truck. The man was carrying an assault rifle and a handgun, Turner Bargen said. Then he noticed a symbol from the far-right militia group Three Percenters affixed to the truck.

“I circled back and took pictures of the vehicle. I was concerned about why they were present at the downtown protest, and had no idea who to notify,” said Turner Bargen in an email to MPR News.

State officials, protesters and residents say they’re alarmed by the presence of extremists who may be using Twin Cities protests against the police killing of George Floyd as cover to burn down buildings and face off with law enforcement. Hundreds of buildings have been damaged and many totally burned in recent days.

Gov. Tim Walz said state officials estimated that 80 percent of the people involved in the violence and destruction were from outside the state.

But according to an analysis of Hennepin County jail records, 83 percent of people who were booked in connection with the protests over a 24-hour stretch starting Friday were from Minnesota, and 56 percent were from Minneapolis or St. Paul.

Walz said that what began as peaceful demonstrations in response to the killing of George Floyd in police custody on May 25 have turned into something else.

“The situation in Minneapolis is no longer in any way about the murder of George Floyd,” Walz said at a morning news conference. “It is about attacking civil society, instilling fear, and disrupting our great cities.”

St. Paul Mayor Melvin Carter said Saturday morning that none of the people arrested in St. Paul Friday night were from Minnesota. However, after MPR News requested arrest records, police confirmed that seven of the 18 people arrested in connection to the protests from Friday night to early Saturday morning were from Minneapolis or St. Paul. Four came from Wisconsin, Texas and North Dakota.

Carter corrected himself later in the day, saying he had been given inaccurate information.

Protesters and onlookers have posted numerous videos and accounts of confrontations with white men on social media, sometimes including symbols associated with fringe groups that originated online.

Bridget Schumann was out for a run near Calhoun Square in south Minneapolis on Friday night when she saw a truck that was being driven aggressively, honking and intimidating other drivers. The truck had a big white sticker on the back of the cab with the OK sign symbol associated with white supremacists.

“There were two men in the driver and passenger seat and they were wearing camo bulletproof vests and they were armed,” she said.

Schumann watched them get out of the truck and walk around in an apartment building parking garage like they were looking for something. She saw them scream at a woman leaving the garage. After they saw Schumann again, she got scared and called her boyfriend to pick her up.

“Very out of place. They weren’t cops, they weren’t National Guard,” Schumann said. “It was all just really hostile.” 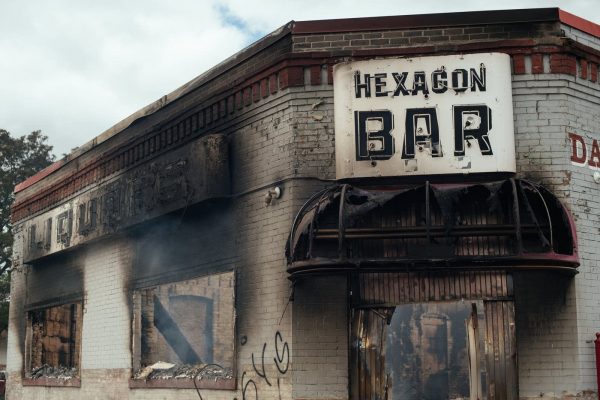 The still smoking Hexagon Bar in South Minneapolis on Friday, the morning after it burned during protests in response to George Floyd’s death. Nate Ryan | MPR

In the predawn hours of Friday, KJ Starr watched from her yard in the Seward neighborhood, which has been especially hard hit by arson, as nearby buildings were consumed by balls of fire and billowing smoke.

With police and firefighters nowhere in sight, Starr and friends have been trying to fight fires themselves. When a nearby pizza shop went up in flames, she and some friends walked over to see what they could do. She was terrified by what she saw.

“This pickup truck of a dozen armed men just pulls up next to us,” she said. “I just did a total pivot.”

Arson at a liquor store

Minneapolis resident Rishi Ragoonanan woke up early for work on Friday morning, and saw a man who appeared to be white walk up to boxes of cardboard in the middle of a liquor store parking lot. The man lit the boxes, pushed them up against the wall of the store, and walked away.

Ragoonanan and neighbors ran outside and dragged the flaming boxes away from the wall. The liquor store was set on fire again the next night.

“None of us got any sleep for the last four days, trying to save this liquor store,” Ragoonanan said. “If this liquor catches fire, this whole neighborhood will burn down.”

Many people say they are leery of confronting those they suspect of contributing to the violence.

Turner Bargen, who saw a truck with a Three Percenters symbol on it, said he was afraid to confront the person, and afraid to call the police because he didn’t want an innocent person to get hurt by a police department that he no longer trusts.

Later he said he thought he’d made the wrong choice and wished he’d had the courage to confront the person himself. The owner of the truck, for his part, told MPR News on Sunday he has been marching with the demonstrators in support of justice for George Floyd.

The stated goals of the Three Percenters militia groups are vague, but they position themselves as protectors of the Constitution and have been associated with right-wing, anti-government causes. According to their official website, they aim to “get patriots to network, prepare, and petition together on a local level.”

The group’s name comes from the idea that only 3 percent of American colonists took up arms against the British. In 2018, three members of an Illinois-based branch of the militia were arrested in connection with a bombing of a mosque in Minnesota. Others were identified in military-style gear at the Unite the Right rally in Charlottesville, Va.

Other groups have also turned their attention to the situation in Minneapolis. Chatter on social media suggests that far-right activists and fringe libertarian groups are seizing on the instability to provoke violence and destruction.

On the Facebook page Big Igloo Bois, administrators have been posting callouts for members to protest in Minneapolis, with one administrator urging members to “come in peace, prepare for there to be violence.”

The page is linked with the Boogaloo Bois, an anti-government far-right group which has made police brutality one of its central issues. The term “boogaloo” refers to a civil war between law enforcement and American citizens.

But not all of the destruction is coming from outsiders.

“There’s certainly a plurality of actors,” said Alexander Reid Ross, doctoral fellow at the Center for Analysis of the Radical Right who has been watching footage and social media from the Twin Cities to try to understand who’s participating in unrest.

Ross said he thinks far-right extremist groups like Three Percenters and Boogaloo Bois are causing violence in the Twin Cities, as are some protesters angry about generations of institutional racism.

“It’s a complex ecosystem of a movement and you are seeing different groups contending to shift the balance in different directions,” Ross said. “There is an element of provocation emerging. And I think that probably comes from within as well as from without.”

Ross also said he did not think that the group Antifa was as much of an agitator in the Twin Cities as President Trump has made it out to be.

“I think it’s totally overblown,” Ross said. “Trump is saying it’s the radical left and Antifa. I was watching some videos and I didn’t recognize anybody from the usual protests that I see.”

Antifa is a loose collection of leftists that aggressively confronts members of the far right, including white supremacists. In the past they’ve drawn criticism for attacking right-wing protesters and law enforcement.

Ross said there had been anti-fascist groups online that had called for protests.

“These are spontaneous, self-organized demonstrations of massive unrest as a result of systemic white supremacy. It really isn’t something that’s being coordinated by anybody as far as I can see.”

People attending protests against police brutality have had run-ins as well.

DeVario Bogenholm, a 23-year-old who’s lived in Minneapolis for most of his life, blames outsiders, who are mostly white, for turning peaceful protests violent Friday night. He turned to Facebook to post a video of him and a friend confronting a group of young, white men who were smashing out storefront windows.

“Who’s destroying these buildings? These white dudes and we’re stopping them,” his friend, Noah Saba, said to the camera, then waved the phone to show footage of a group of white men on bicycles in front of a group of vandalized and burning buildings, “They’re setting these fires.”

Bogenholm said the video doesn’t fully capture the mob, with people of color largely at the back of the crowd and young white men initiating the damage to buildings.

Bogenholm and his friend demanded the men apologize for vandalizing the buildings and making black people look bad and then told them to leave. He said more people in the crowd turned on the men, and they rode off on bicycles.

“They knew they were in the wrong,” Bogenholm said. “And it was making us look bad.”

Hundreds of buildings across the Twin Cities have been damaged in the riots. A native youth cultural center, neighborhood bars and a building full of artist studios are among the structures that have been set on fire.

“When you see no protest, there’s no mob sweeping through the north side, yet you see these fires popping up the main business corridor, that’s the thing that rang odd to me,” Ellison said. “Burning down small black- and immigrant-owned businesses, that doesn’t seem in lockstep with the tone of the protests.”

City and state law enforcement agencies have lost control of the streets repeatedly, and left local businesses and residents to fend for themselves. Some residents have gone as far as to protect their homes or businesses while carrying bats or sticks, chasing off people trying to damage or destroy buildings.

In the south Minneapolis neighborhood of Powderhorn Park, residents and a City Council member co-hosted a community meeting on Saturday morning. It was titled “block by block: A plan for neighborhood peacekeeping.” More than a thousand residents attended.

Co-organizer Sam Gould said even when the violence dies down, the neighborhood is going to be charred.

Alexia Kelsey went out to the protest site Friday to help clean. She said the hair on the back of her neck rose  after she saw a vehicle carrying two armed white men that had a bumper sticker associated with neo-Nazis.

“As a white ally, it’s even more important to support the black community and provide a unified front,” Kelsey said. “It’s tough because it seems like they’re using the opportunity of the cover of night to really ignite the violence.”

Officials have repeatedly promised that they’ll restore security and safety. They stressed at this morning’s news conference that they want to ensure that protesters can exercise their right to free speech, but that they will not tolerate rioting and destruction.

Carter said that the outside agitators are using peaceful protesters as a “human shield,” committing acts of destruction and violence and then melting back into the crowd.

“If you’re out after 8 o’clock, you are aiding and abetting them and you are giving them the cover that they want,” Walz said.