Amidst Tangled Ties To Russia, ISIS

Dubbed Golden Pass Products, the expansion of this LNG facility to export gas is a joint venture between Exxon (30 percent stake) and Qatar Petroleum (70 percent stake), the state-owned oil company. Golden Pass LNG is now the fourth LNG export facility, and third situated along the Gulf of Mexico, approved under the Obama administration.

This facility will continue to open up the global market to U.S. natural gas obtained via hydraulic fracturing (“fracking”).

The permit for Golden Pass comes shortly after Exxon’s CEO, Rex Tillerson, was named Trump’s nominee for U.S. Secretary of State and will likely face a tough Senate confirmation hearing in January, mainly due to his close ties to Russia. 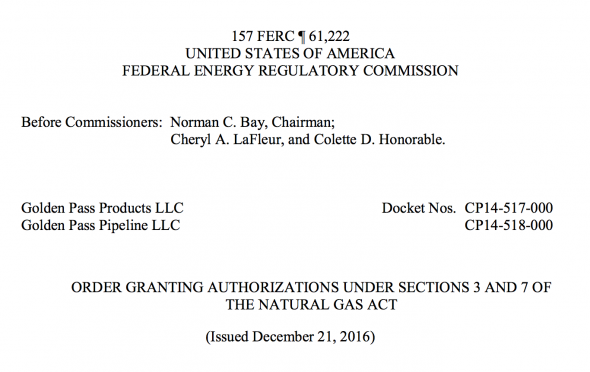 In handing Golden Pass the permit, FERC stated that “the environmental effects resulting from the export of LNG as a commodity, i.e. effects related to future upstream production, gas-to-coal-switching, and foreign end use of natural gas, are neither caused by the Commission’s approval of Golden Pass’s LNG export facilities, nor reasonably foreseeable consequences of the Commission’s approval of these facilities.”

But critics, such as Joe Romm of the Center for American Progress, say a U.S. LNG export boom would be a climate change catastrophe due to methane leakage and emissions. Methane is a greenhouse gas 86 times more potent than carbon dioxide during its first 20 years in the atmosphere.

“At best, investing billions in LNG infrastructure is a waste of enormous resources better utilized for deploying truly low-carbon energy,” wrote Romm in March 2014. “At worst, it helps accelerate the world past the 2°C (3.6°F) warming threshold into Terra incognita — a planet of amplifying feedbacks and multiple simultaneous catastrophic impacts.”

Originally, the push to export LNG from the U.S. centered around a bipartisan-promoted premise of weaning U.S.-allied countries off of Russian gas.

The most recent bipartisan push in 2014 consisted of the likes of U.S. Rep. John Boehner (R-OH) and U.S.Sen. John McCain (R-AZ), as well former Clinton Administration U.S. Secretary of Energy Bill Richardson, pointing to the utility of exporting U.S. LNG to weaken Russia’s influence. This ensued at the dawn of the Crimea crisis in Ukraine.

“What can the U.S. do to help alleviate Europe’s reliance on Russian natural gas?,” wrote McCain in The Wall Street Journal in July 2014. “We need to use our leverage wisely: to boost our economy at home, and to strengthen our national security by helping our allies resist Russian aggression.”

Even before the Crimea crisis began, in December 2012, the U.S. Senate Committee on Foreign Relations published a 62 page report calling for the U.S. government to start “putting molecules where our mouth is” and use U.S. LNG exports as a cudgel against Russia to “contribute to European energy security.”

Two and a half years later on December 11, 2016, the state-owned Qatar Investment Authority announced a purchase of a 9.75 percent stake in Russian state-owned oil and gas giant Rosneft. Igor Sechin, former deputy prime minister under Russian President Vladimir Putin and current executive chairman of Rosneft, said in a Rosneft press release that the “privatization deal marks itself as the largest in the history of Russia.”

As reported by DeSmog and many other outlets, Exxon and Rosneft have several joint venture deals, including exploration deals in Russia’s Bazhenov Shale basin in Siberia and offshore in the Russian Arctic. It appears likely Tillerson will come under heavy questioning about those ties during his U.S. Senate confirmation hearing.

Russia’s alleged intervention in the U.S. presidential election by hacking into the email databases of the Democratic National Committee (DNC) and Podesta, are currently under review by the U.S. intelligence bureaucracy. In a recent interview with NPR, Obama said the U.S. will retaliate against Russia during his remaining weeks in office.

Beyond the close personal and financial connections to a country which many observers believe to be a geopolitical adversary, there is another key node in this tangled web: Qatar and its relationship to the Islamic State in Iraq and Syria (ISIS).

Ironically enough, that relationship recently came to light in the Podesta emails published by Wikileaks and allegedly obtained by Russian-sponsored hackers. Clinton emailed Podesta in September 2014 and cited Western intelligence agencies, stating that Qatar and Saudi Arabia are providing “clandestine financial and logistic support” to ISIS.

Newsweek also reported in November 2014 that the Qatari, Saudi Arabian, and Kuwaiti governments and business elites within those countries had given as much as $40 million to the group. Qatar denies it has ever directly funded ISIS.

Adding further complexity to the situation, Trump has said repeatedly that under his watch, his administration would “knock the hell out of ISIS.”

“You Are the Gift”

Geopolitical relationships change over time, of course, and Russia now serves as a case in point. The Trump transition team has signaled a potential U.S.-Russia reset, with friendlier relations between Washington and Moscow to follow.

Saturday Night Live even ran a recent parody segment featuring Tillerson, Trump, and Putin, in which Putin told Trump, “You are the gift.”

Naomi Klein, boardmember of climate advocacy organization 350.org and author of the 2014 book This Changes Everything: Capitalism vs. the Climate, warned that the Crimea crisis could serve as a gift of its own for the LNG industry — and the fossil fuel industry at-large — for decades to come, regardless of ever-changing geopolitical realities.

“I call this knack for exploiting crisis for private gain the shock doctrine, and it shows no signs of retreating. We all know how the shock doctrine works: during times of crisis, whether real or manufactured, our elites are able to ram through unpopular policies that are detrimental to the majority under cover of emergency,” wrote Klein in The Guardian in April 2014.

“Sure there are objections — from climate scientists warning of the potent warming powers of methane, or local communities that don’t want these high-risk export ports on their beloved coasts. But who has time for debate? It’s an emergency!”

In a recent “Thank You” tour speech held in West Allis, Wisconsin, Trump told the crowd that “We are going to say merry Christmas again.” And for Exxon, Rosneft, and Qatar Petroleum, it’s looking like it’ll be a very merry Christmas, indeed.

For the future of the ever-warming planet and record-warm North Pole in the Arctic where Santa lives and works? Not so much.