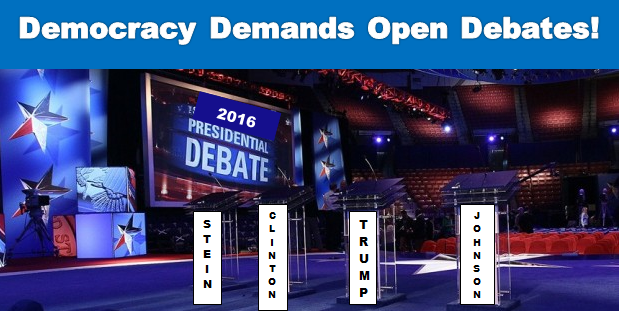 Above Photo: Go to www.facebook.com/CampaignForOpenDebates and “like” the page

The Commission on Presidential Debates, or CPD, has been under fire for its policies for several years now. For the past 24 years, the CPD has excluded anyone but the Republican and Democratic nominees from participating in the three presidential debates and one vice-presidential debate in September and October before the election.

An important lawsuit, Level the Playing Field, et al. v. Federal Election Commission, goes before a federal judge on Jan. 5. That suit seeks to accomplish what the CPD has refused to do on its own: change the rules to stop systematically preventing independent candidates from debating – and becoming president.

Meanwhile, it seems no coincidence that the CPD itself is disintegrating. Here’s what has happened:

So, to sum up: The CPD has lost one-third of its board members in the past year.

Why Are CPD Board Members Deserting?

The question is why, and the CPD itself is not forthcoming. In fact, the commission has not issued a press release about its board membership in two and a half years. It required analysis akin to Kremlinology to glean the information we presented above.

While the CPD’s policies have an enormous impact on our electoral system, the commission itself is shockingly opaque.

For example, the CPD announced with great fanfare that it was considering changes in 2016 to its criteria for admission to the debate stage. Then, on Oct. 29, 2015, after refusing to meet with members of Change the Rule, the 50 signers of a letter demanding reform, in 2015, the commission announced that a working group of the board, headed by Ridings, had concluded that, in fact, no changes were necessary – meaning, of course, that only the Republican and Democratic nominees would be debating.

But at that time the CPD did indicate that there was dissent in its ranks: “The criteria for 2016 were adopted by a majority vote of the CPD board.” In other words, the decision was not unanimous. Inquiries to board members about the nature and extent of the dissent were futile. We were told that the proceedings – of a non-profit whose decisions can determine the outcome of a presidential election – were private and confidential and that CPD directors had been “sworn to secrecy.”

Here Are Our Conclusions

We can, however, draw our own conclusions.

It is hard to interpret the departure of men and women of principle, like Panetta, Daniels, Tilghman, and Schieffer as being anything but a result of the criticism that has been directed at the board.

Because the CPD won’t do its duty, the federal courts will have to insure that its duty is done.

We doubt that these directors could not stand the heat. More likely, they could not tolerate the decision the board made to keep its rules the same as they have been for decades. In other words, they may have agreed with the criticism being leveled at the CPD.

This is our educated guess. Even Fahrenkopf and McCurry had to admit in 2015: “We are mindful of the changes in the electorate and the large number of voters who now self-identify as independents.”

But changes in the electorate won’t ever produce changes in the debate-admission rules – not if the organization that makes the rules continues to be dominated by stalwarts of the two parties who conduct their business in secret.

The Lawsuit Being Heard in Two and a Half Weeks

Because the CPD won’t do its duty, the federal courts will have to insure that its duty is done. That will be an embarrassment to those left on the commission, including people who should know better like former Rep. Jane Harman and former Sen. Olympia Snowe. All the directors should read the 80-page Motion for Summary Judgment filed by Alexandra Shapiro, a top New York litigator, in April and being heard in Washington in two and a half weeks.

That motion argues that:

(1) the CPD is not a nonpartisan organization, and it endorses, supports, or opposes political parties, (2) the CPD’s 15% polling criterion is not objective, and therefore (3) the CPD violated FECA [Federal Election Campaign Act] by making illegal corporate contributions and expenditures, accepting illegal contributions, and failing to register as a political committee and disclose its contributors and expenditures.

The motion also notes that the vast majority of Americans want to have the choice of an independent as president and want to see a third debater on the stage.

A crumbling CPD can do the right thing now all by itself, even without the court’s decision. What more evidence do we need that the electoral system is broken?  The weekend before the election, the two candidates had a combined 111 percentage points of disapproval. And the election itself saw the lowest percentage turnout since 1996. It’s time to fix a broken system before the next election, which will be sooner than you think.