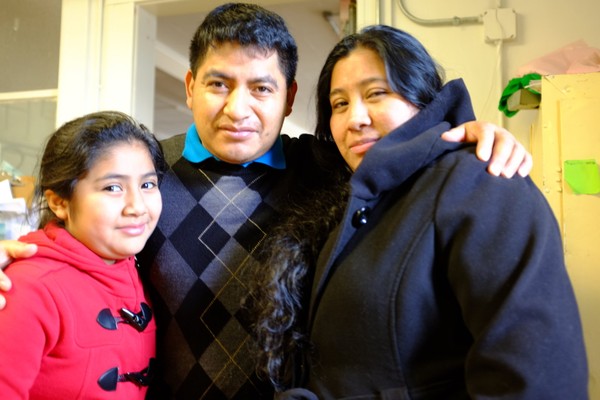 Above Photo: Lucio Perez , center, with his daughter Lucy and wife Dora Perez of Springfield at the First Congregational Church kitchen where he has found sanctuary from deportation. (Diane Lederman/The Republican)

AMHERST — The first few days were hard for Lucio Perez.

Living at First Congregational Church for the last month, he misses his wife and children. But with the help of the greater faith community, he has adapted to a new way to be.

The church has given sanctuary from deportation to Perez, a Springfield resident who entered the U.S. illegally from Guatemala in 1999. He moved into the church Oct. 19, the same day he had been ordered to fly back to Guatemala.

Through translator Margaret Sawyer from the Pioneer Valley Workers Center, Perez said, “The first few days were hard but now I’m getting used to it.”

Perez has a small apartment in the church and a portable shower.

He attends Pentecostal services three days a week. He reads the Bible. He lifts weights and rides an exercise bicycle. He has a TV and watches movies or listens to music.

And he has been helping the church get ready for its Nov. 18 cranberry fair.

Perez has lots of visitors, including Amherst College students and a recent guest lecturer from Guatemala. The church has screened and trained a stable of volunteers to help Perez and keep him company.

“There are lots of really nice people here,” he said through Sawyer. “They give me courage and strength.”

Perez’s wife and three children visit about twice a week when they can get a ride from Springfield. They were there during an interview Friday with The Republican. Perez and his 8-year-old daughter had their arms around each other as he spoke. She said she misses going to church with her father.

His wife, Dora, said of the church providing sanctuary, “It’s super nice. It would be better if he was home.”

Perez smiled recounting some of the meals volunteers have provided, including lots of salads, which he didn’t often eat at home. He misses the tortillas his wife makes, which they would eat at every meal. She said she sometimes brings him meals from home.

Springfield police arrested 18 activists Monday morning after protesters sat down and linked arms in front of the office building that houses the city’s Department of Homeland Security branch.

Perez worked as a landscaper. An incident in 2009 put him on the radar of Immigration and Customs Enforcement. He was allowed to remain in the U.S. as long as he regularly checked in with immigration authorities. An Obama-era prioritization system granted stays of deportation to many immigrants who had entered the U.S. illegally but did not have criminal records.

That changed after Donald Trump was elected president. The new administration prioritized removal of undocumented immigrants, and earlier this year authorities ordered Perez to buy a one-way plane ticket back to Guatemala.

He is now waiting for a judge to review his case.

The Rev. Vicki Kemper said providing sanctuary for Perez has been a challenge. “We’re learning as we go,” she said.

Kemper said First Congregational has been joined by 13 faith communities in the Amherst area that provide food and support for Perez.

“That makes all the difference in the world,” she said.

She said church members “have expressed support for him and his family.”

What the church is doing, she said, “is really not an act of resistance. It’s an act of love, an act of faith.”

Anyone who wants to help can donate. The church needs help covering expenses, and anything raised beyond that is helping Perez’s family, Kemper said.