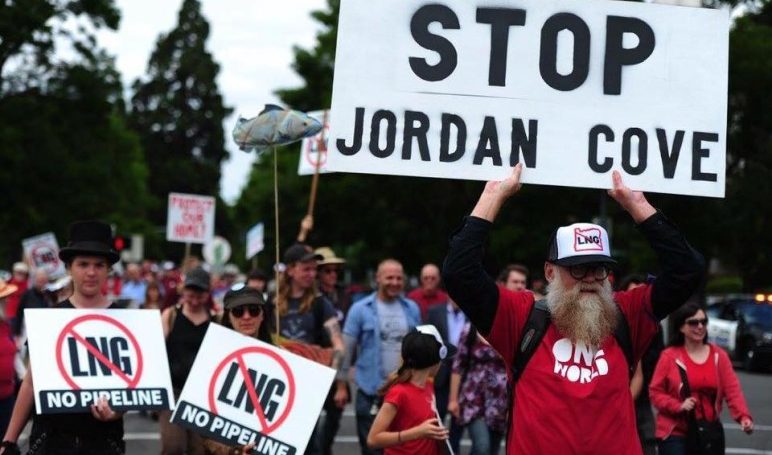 Salem, OR – Amidst enormous public opposition and just one week before the Department of State Lands (DSL) was set to make a decision on a critical Removal-Fill permit on the Jordan Cove LNG export terminal and Pacific Connector fracked gas pipeline, Pembina has withdrawn their application to the agency.

On Tuesday, DSL issued a rejection of a request for Pembina to extend the agencies timeline, noting the Canadian fossil fuel corporation had still not provided adequate information after multiple extensions.

“It is outrageous that Pembina has withdrawn their application just a few days before the Department of State Lands was set to make a decision,” said Mike Graybill, Former Manager of the South Slough National Estuarine Research Reserve and resident of Coos County. “Again and again, we have seen this Canadian fossil fuel corporation not playing by the same rules any other company would have to for a project of this size.”

“I was one of hundreds who spoke out against this project at the Department of State Lands hearing in Klamath Falls because the proposed pipeline threatens our watersheds, forests, culture, ancestral homelands, burial sites and future,” said 17-year old member of the Klamath Tribes Ashia Wilson.

“Jordan Cove LNG would do tremendous harm to Oregon communities in the path of the pipeline, and they clearly did not meet the bar to get this permit,” said Stacey Detwiler of Rogue Riverkeeper. “This project is not consistent with the protection, conservation, or best use of Oregon’s waters. Director Vicki Walker and Oregon DSL created a fair public process, and now Pembina is backing out so that they don’t have to play by the rules.”

The Removal-Fill permit is a critical state permit needed by Pembina to build its proposed fracked gas export terminal, dredge millions of cubic feet of sediment out of Coos Bay for LNG tankers, and construct a pipeline through and under hundreds of waterways in Southern Oregon. The project cannot move forward without it.

Under Oregon law, DSL has the authority to deny permits for projects that are not consistent with the protection, conservation, or best use of Oregon’s waters and that unreasonably interfere with navigation, fishing, or public recreation.

Approximately 49,000 comments were submitted by impacted landowners, Tribal members and Governments, commercial fishermen, small business owners, health professionals, youth, and many more Oregonians concerned about the impacts the fossil fuel project would have on hundreds of waterways in southwest Oregon. Close to 3,000 rural Southern Oregon residents spoke out against the project at overflowing DSL hearings in Klamath County, Jackson County, Douglas County, and Coos County. In November, nearly 1,000 people rallied in opposition to Jordan Cove LNG at the state capitol building.

“Thousands of southern Oregonians showed up to hearings and submitted comments in opposition to this project,” said Hannah Sohl of Rogue Climate. “Pembina wasted more than two years of taxpayers’ time pushing for this state agency’s approval even though it was obvious the project could never meet the state standards that protect our fisheries, rural communities, and waterways.”

Other permitting processes, such as the Federal Energy Regulatory Commission’s certification under the Natural Gas Act, are still moving forward. However, the project cannot proceed without the Removal-Fill permit or the Clean Water Act permit that was denied by the Oregon Department of Environmental Quality (DEQ) in May 2019. Oregon DEQ denied the Clean Water Act Section 401 permit with over 200 pages of detailed findings that the massive LNG export terminal and pipeline could not demonstrate that they would meet Oregon’s clean water standards.

“If they have to withdraw an application like this after 15 years of outside companies trying to get approval, then it’s time for them to withdraw the project altogether.” Stacey McLaughlin, an impacted Douglas County landowner. “Leave Oregon farmers, fishermen, ranchers, and tribal members alone. It’s time for Pembina to cancel this project. Oregon doesn’t want this pipeline.”

Impacted landowners, tribal members, fishermen, climate advocates, and more will be hosting a Press Conference in response to this application withdrawal at 9:30AM on Tuesday, February 4th at the Department of State Lands building in Salem.